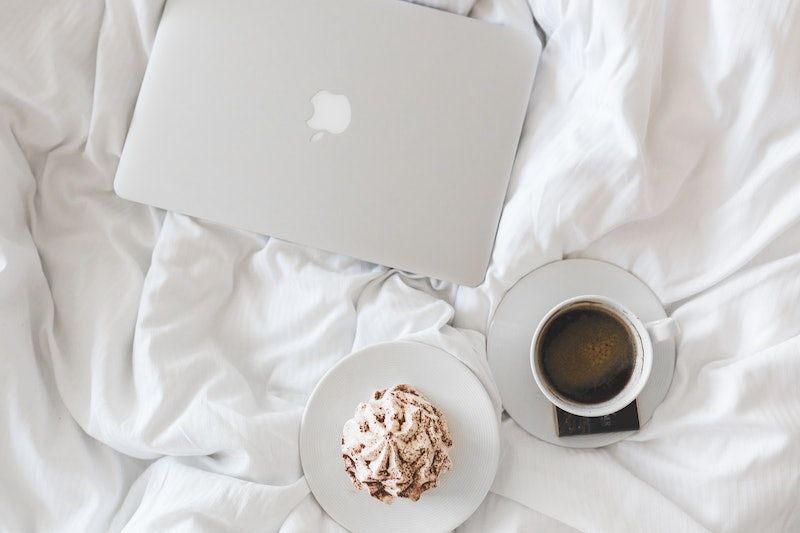 If you're one of those people who can take a nap after having a cup of coffee then this new nap trend — just in time for International Coffee Day Sept. 29 — just might be for you. Just what is a coffee nap? For most people, going to sleep after sipping a cup of coffee seems counterintuitive, but myriad studies suggest that it actually takes the caffeine from your coffee almost a half hour to kick in. This means that after you finish your java, it's an ideal time to lie down for a quick power nap.

"I think the interest [in coffee naps] has developed since napping has become more prevalent in the workplace combined with the fact that people are increasingly exhausted," MetroNaps CEO Christopher Lindholst tells Bustle in an email. "It takes about 20 minutes for your body to metabolize the caffeine. So, when you wake up from your short nap, you are getting a boost from the combination of the sleep and the caffeine. This also helps eliminate any sleep inertia (grogginess) you might feel from your nap."

While it's a little upsetting that people are so tired at work that they actually need to nap in the middle of the day, it is good news that more companies are embracing nap time as a normal, acceptable part of the work day. Some companies, and universities, are going one step further and furnishing their offices with nap pods, called EnergyPods, from MetroNaps, so you don't have to grab your z's under your desk, George Costanza-style.

If an EnergyPod is out of reach where you work (as they can cost up to $13,000), then a coffee nap is the next best thing. Because naps are actually really important. If your boss disagrees, show them this:

"Until fairly recently, sleep wellness was missing from most wellness programs — they tended to focus on diet, weight, exercise and smoking cessation. That’s been kind of unfortunate because of the major contribution that sleep makes to health and wellness,” Lawrence Epstein, director of the sleep medicine fellowship program at Brigham & Women’s Hospital in Boston and an instructor at Harvard Medical School told the Financial Times.

Coffee naps work, according to Bulletproof Founder and CEO Dave Asprey, because "when you drink caffeine, it passes to your small intestine and gets absorbed into your bloodstream. It then kickstarts your brain chemistry by blocking receptors normally filled by similar energy transferring molecules of Adenosine, a chemical compound in your brain known for causing drowsiness."

Personally, I nap after drinking coffee quite often, and my naps usually last just about 20 minutes. I always thought it was weird that I felt like getting back up after such a short rest, but after learning how the coffee naps works it makes total sense.

My favorite pre-nap coffee is something strong, like Colectivo French Roast. With hints of dark chocolate and licorice it can serve as an after-lunch snack, and your super strong pre-nap elixir. For me, strong coffee is the only acceptable coffee, and I could give Lorelai Gilmore a serious run for her money with my coffee habit.

So, now for the obvious question: Wouldn't it make more sense to drink the coffee after your nap?

"You could do that too. The caffeine would just kick in a little later," Lindholst tells Bustle. Basically if you nap after drinking the coffee the caffeine kicks in within 20 minutes and wakes you up, which is not the case if you do the reverse.

"But I would really recommend keeping the coffee nap only for truly desperate situations," Lindholst says. A non-caffeinated 20-minute nap is invigorating on its own. And if you are napping in the afternoon, caffeine consumption isn't ideal since it can have a meaningful impact on you for eight hours post consumption and can therefore interfere with your nighttime sleep. I would save the coffee for when you get to the office in the morning."

And, if you need a nap right when you get to work, that's really a different problem entirely.