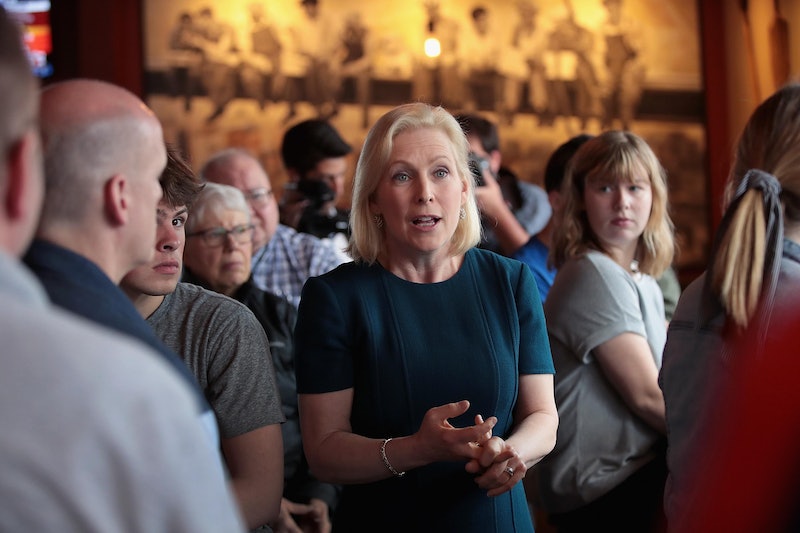 On Wednesday, Sen. Kirsten Gillibrand proposed a sweeping new plan aimed at getting big money out of politics. The Clean Elections Plan is centered on something called "Democracy Dollars," and Gillibrand says it would "eliminate the corrupting influence of big donors and special interests on politicians in Washington, D.C." The plan has several facets, but at its core is a proposal to give eligible voters vouchers that they can use as donations to political campaigns.

"Gillibrand knows that greed and corruption prevent progress on the issues that matter most for the vast majority of Americans – like passing gun violence prevention measures, addressing climate change, and lowering the cost of prescription drugs," the New York senator's presidential campaign said in a press release. "Gillibrand’s plan would change that by making every American’s voice as loud as the Koch Brothers’."

Under the proposal, every American would be eligible to receive "Democracy Dollars" from the Federal Elections Commission every election cycle that they could use to donate to federal election campaigns. Specifically, each voter would be given $200 worth of vouchers for each federal race in any given election cycle. They would be allowed to donate $100 of this to primary campaigns and the other $100 to general election campaigns, and recipients would have the option of splitting the vouchers up into $10 increments if they wished to donate to multiple candidates. According to NBC News, Americans could only use these vouchers for candidates running in their own states.

In order for candidates to be eligible to receive "Democracy Dollars," they'll have to forgo any individual donations above $200. Currently, the individual donor limit is $2,800 per primary and $2,800 per general. The Democracy Dollars themselves will be funded by "eliminating a taxpayer subsidy that is currently enjoyed by CEOs who make excessive salaries, and would raise over $60 billion in ten years," according to Gillibrand's press release.

The hope is that these vouchers will both increase voter participation in the electoral process by compelling more people to donate to candidates they like and, simultaneously, weed big money out of politics by incentivizing politicians to cap individual donations to $200.

“To get anything done in Washington, we have to address the money and greed that corrupts politicians and prevents progress on issues like gun violence prevention, lowering the cost of prescription drugs and addressing climate change,” Gillibrand said in her press release. “My Clean Elections plan is a critical structural change that gets big money and special interests out of politics, and ensures that elected officials in Washington are beholden only to the people who sent them there."

The basic outline of Gillibrand's proposal was first introduced in 2011 by Professor Larry Lessig, according to Vox, and a version of it was implemented in local elections in Seattle in 2017 after voters overwhelming voted to adopt an election voucher program three years earlier.

Seattle City Council Member Teresa Mosqueda, who won election in 2017 by running as a Democracy Voucher candidate, tells Bustle that Gillibrand's proposal is "a phenomenal idea." She says that a "robust education campaign" to inform voters about the vouchers, both by governments and by private advocacy groups, can compel more people to adopt them, and that in general, voucher programs like this will help make sure that "our democracy is truly a representative democracy."

"Those democracy vouchers really made a citywide representative like me be representative of the entire city," Mosqueda tells Bustle. "When we think about, how do we engage women and people of color, and younger folks, and immigrants, and refugees, who have historically been marginalized from our electoral process, this is a huge way for us to make sure that people actually have a voice in elections."