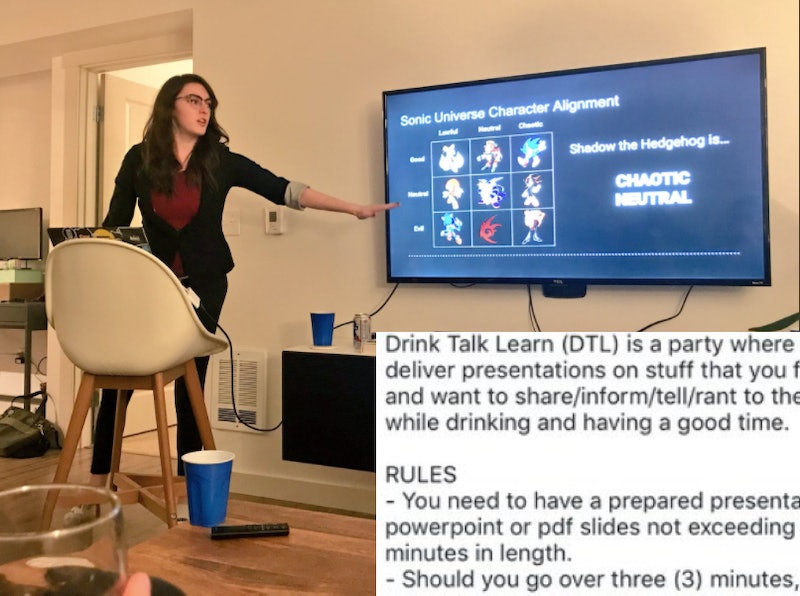 Sometimes, the internet grants us glorious, magnificent things— and today, it has bestowed upon us a truly epic PowerPoint presentation about a Sonic the Hedgehog character. The presentation hit the internet on Sunday courtesy of the person who gave it; Michal, a software engineer based in Seattle, tweeted photographs of the whole thing inaction along with the message, “Last night I went to a party where everyone had to prepare a 3-minute lecture on something they were passionate about. I won best presentation.” Michal and her presentation quickly went viral, because, well… deep thoughts. Pop culture. PowerPoint. Drinking games. What’s not to love? It’s all of the internet’s favorite things, all tied up in one hilarious package.

Michal gave the presentation as part of a “Drink Talk Learn (DTL) party” — an event wherein, according to the rules she posted to Twitter, is “the point is to deliver presentations on stuff you find interesting and want to share/inform/tell/rant to the rest of us all while drinking and having a good time.” (Honestly, it sounds kind of like a Toastmasters-style meeting with booze — definitely something I can get behind.) Each participant was required to prepare a short lecture on a topic of their own choosing, with two elements being absolutely necessary for inclusion: The presentation could be no more than three minutes in length, and a slideshow had to be part of it.

However, setting your slideshow to advance automatically such that it would clock in at under three minutes was prohibited. Why? Because that’s cheating. There was a penalty for going over three minutes — state the rules, “Should you go over three (3) minutes, you will be asked to finish your drink, and then resume giving your presentation. Every additional minute will result in further drinking penalties” — so setting your slideshow to run according to a timer in order to avoid the penalty was deemed Not OK. Therefore, if you were discovered to have set your slideshow to automatically advance in less than three minutes, another drinking penalty would be enacted.

Three awards were handed out at the conclusion of all the presentations: Closest to three minutes without going over, best dressed (the dress code for the event was business casual), and best presentation. That last award is the one Michal took home — and, I mean, I can see why. Her presentation looks amazing.

As evinced by her Twitter feed, Michal is very much into Sonic the Hedgehog lore. Tidbits referencing the franchise are all over her timeline, ranging from memes:

To insights about the characters:

(Admittedly, most of the jokes are somewhat self-selecting; this one, for example, is funnier if you’re familiar with the item depicted in the photograph. If you are, your thoughts about it will probably be similar to my own, which were, in order: 1) “Hey, I know that thing!” And 2) “OMG IT TOTALLY IS.” For the curious, That Thing is a sculpture by Claes Oldenburg and Coosjevan Bruggen titled Typewriter Eraser, Scale X. It is located in the sculpture garden opposite the National Gallery of Art in Washington, DC.)

Knowing all this, then, it’s not unexpected that Michal’s presentation would focus on Sonic in some way, shape, or form. She’s clearly passionate about it, and since the presentations were meant to address topics about which the participants were passionate… well, you do the math. Accordingly, Michal chose to explore the “true moral compass” of the character of Shadow the Hedgehog. And boy, did she do a bang-up job.

Shadow first appeared in Sonic Adventure 2, which was released for the Sega Dreamcast in 2001. An artificially-created being, he was initially presented as a villain in league with Dr. Eggman as he attempted to take over the world (again); towards the end of the game, however, he became more of an anti-hero with a redemptive character arc instead of a fully antagonistic one. He’s been a fixture in the Sonic franchise ever since, appearing both as playable and non-playable characters in different games — but with this backstory, he’s ripe for analysis.

According to Michal’s tweet, her presentation identified the ethical alignment of a variety of different Sonic characters — Tails, for example, is Lawful Good; Knuckles is Lawful Neutral; Sonic himself is Chaotic Good — and examined how Shadow, which she pegged as Chaotic Neutral, fit in with them all. She addressed why she thought Shadow is Chaotic:

And mapped the Good, Neutral, and Evil outcomes of different choices in the 2005 game Shadow the Hedgehog as further proof:

She also delved into philosophy, discussing John Locke’s idea of the tabula rasa, or blank slate, in relation to Shadow — who, when he is first awakened by Dr. Eggman in Sonic Adventures 2, has no memory of who he is other than his name and a few scattered images of his past ricocheting through his brain.

Sounds like a good time, no? Twitter certainly thinks so; folk sare very much into both Michal’s presentation and the idea of Drink Talk Learn parties in general:

As such, I wouldn’t be surprised if we start hearing about more DTLs in the near future. They might not all go as viral as Michal’s presentation did — but they don’t need to. Just the fact of their existence is enough. Knowledge is power, after all, right? And if you can learn while having a good time — well, that’s the best of all possible worlds right there.

More like this
Twitter Is Having A Field Day Over Mr Blobby’s Costume Selling For £62k
By Catharina Cheung
Ashamed Of Your Screen Time Stats? Here's How To Change That
By Alexis Morillo
Learning To Love, Not Judge, The Lunchbox Wives Of TikTok
By Esther Zuckerman
I Spent 2 Years Trying TikTok’s Dating Advice
By Kailynn Johnson
Get Even More From Bustle — Sign Up For The Newsletter
From hair trends to relationship advice, our daily newsletter has everything you need to sound like a person who’s on TikTok, even if you aren’t.