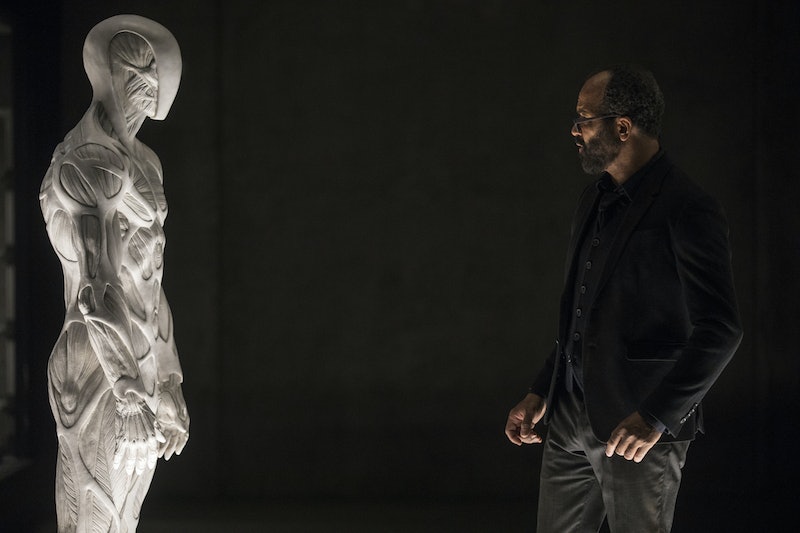 The first season of Westworld features no shortage of horrors and death, But there were no monsters — at least in the traditional sense. The Man in Black could be considered a monstrous human being, and the young host version of Robert Ford is creepy, with his robotic face opening trick. Tut Westworld Season 2 introduces drone hosts, an as-yet unseen behind-the-scenes feature of the park. They cut an imposing figure in the Season 2 trailer, but these towering humanoids are even scarier when you realize what exactly they are.

Considering the name and their appearance, it's likely that these faceless robots were designed using the same methodology as sentient hosts like Dolores and Maeve. But they are presumably not programmed with a personality. Contrasted with the human-like casing and appearance of the proper park hosts, the drone hosts look more like 3D-printed models of humans created from the white lacquer seen so often during the creation process. These emotionless robots are literal blank slates — even more so than the other hosts — but what role will they play in the second season of Westworld? These machines are more than just set dressing, and will likely end up playing into the philosophical themes of the show.

The entire first season of Westworld follows Dolores' quest to attain true consciousness — even if she wasn't always sure that that's the quest she was on. The creators of Westworld's hosts — Robert Ford and Arnold Weber — believed that their creations were not merely robots meant to be tortured and maimed for the entertainment of others, but that they were capable of being exact replicas of humans once they attained free will. In many ways, it seems that the hosts of Westworld are actually morally better than the humans they serve, and have the ability to alter their own programming when needed. But while the hosts of Westworld are finally liberated in the season finale, the drone hosts don't seem to have been invited to the sentience party.

The drone hosts are clearly designed for work that does not require a believably human appearance, unlike most of the hosts that audiences have been introduced to. However, the nature of these worker hosts is not as simple as merely performing manual labor. In an interview with Entertainment Weekly, showrunner Jonathan Nolan explained, "The drone hosts relate to the [Delos] corporation’s secret project which is hidden in plain sight in this park. As we talked about in the pilot, the park is one thing for the guests, and it’s another thing for its shareholders and management — something completely different."

While the true nature of the drone hosts' purpose has not yet been revealed, the inhumanity of these human-shaped robots hints that Delos Incorporated could be trying to use Ford and Arnold's technology to establish supposedly-ethical slavery. These drone hosts could be intended to replace human labor. However, as Arnold made clear to Robert before opening the park, he found it irresponsible to subject the human-looking hosts to the whims of Westworld tourists as it was subjecting conscious beings to being used and abused for others' pleasure. While the Westworld hosts had to suffer for guests' entertainment, the drone hosts may be subjected to lifetimes of physical labor in the name of convenience.

Whatever Delos' plans are for the drone hosts, it's unlikely that the company planned on the hosts establishing self-awareness and rebelling against the company. By attempting to create strong and durable androids, Delos may have cursed itself and the human race to have to fend off some incredibly powerful creatures. Whatever the purpose of the drone hosts is in Westworld, you can expect their mission and loyalty to change very as matters continue to go badly for the humans of Delos Destinations.