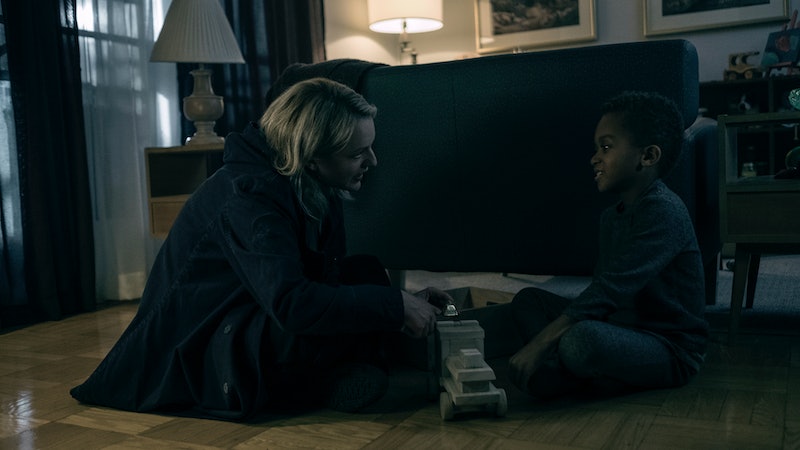 The specifics of Gilead's societal functions aren't all immediately apparent in The Handmaid's Tale, but viewers of the Hulu show are introduced to one more sect of society as Season 2 gets into the swing of things. So what are "econopeople" on The Handmaid's Tale?

Apparently, they're a portion of society that aren't handmaids or commanders — they're just trying to quietly and carefully live their lives under the watchful eye of Gilead. Margaret Atwood herself, author of The Handmaid's Tale book, wrote in the New York Times last year that econowives were the wives of low-ranking men in society, so the middle class of Gilead as a whole is referred to as "econopeople." It's not altogether clear how the econowives and handmaids are distinguished from each other in this new government. But, June has made several references to the fact that she's considered an "adulteress" because her relationship with Luke started before he was technically divorced, so that could explain why she was put into the less favorable of the potential ranks.

There's also plenty of discussion online about what separates an econowife from the handmaids, and it's something the show could continue to explore as time goes on.

Some question if econowives are able to have children, and if they are, why they weren't forced into becoming handmaids as well, given how little the society values women's free will? But the consensus seems to be that handmaids differ from econowives because they committed some kind of sin in Gilead's eyes. "Speaking within the confines of the show ... econowives can be fertile or infertile," wrote Reddit user Tary_n. "They are not handmaids because they committed no crimes and were in legitimate heterosexual marriages pre-Gilead." In the book, there are seemingly hints in the epilogue to econowives being pressured into a handmaid's role, but the show has yet to hint that this might be the case down the line.

It'd be interesting for the show to expand upon this idea of econopeople. Gilead is full of regular citizens who are enduring this dystopia in a variety of roles that don't just include handmaid and commander. Now that The Handmaid's Tale has officially surpassed its source material and plans to expand upon the smaller details of the story, it's definitely a plot point that deserves further examination.

Showrunner Bruce Miller has made it clear that he wants the show to stay within Atwood's universe, and simply take deeper dives into things she couldn't fully flesh out within the narrative she set out to tell. He told The Hollywood Reporter that he planned the show out to 10 seasons when he initially outlined it — he's not opposed to creating big stories out of things Atwood might have just mentioned in passing.

"People talk about how we're beyond the book, but we're not really. The book starts, then jumps 200 years with an academic discussion at the end of it, about what's happened in those intervening 200 years," he told THR. "It's maybe handled in an outline, but it's still there in Margaret's novel. We're not going beyond the novel; we're just covering territory she covered quickly, a bit more slowly."

The Handmaid's Tale tells a compelling story with June, but some of the juiciest parts are when it drops details about what life is like outside of her personal experience. Viewers are let in on tiny bits of drama from within the government, or from Alaska or Canada or Mexico, but never given the entire story about all that's happening. Featuring more of these econopeople could be a method for the story to give a little more context to Gilead as a whole, and for June to learn more information she wouldn't otherwise know. Hopefully she just finds a way to safely cross paths with them again.