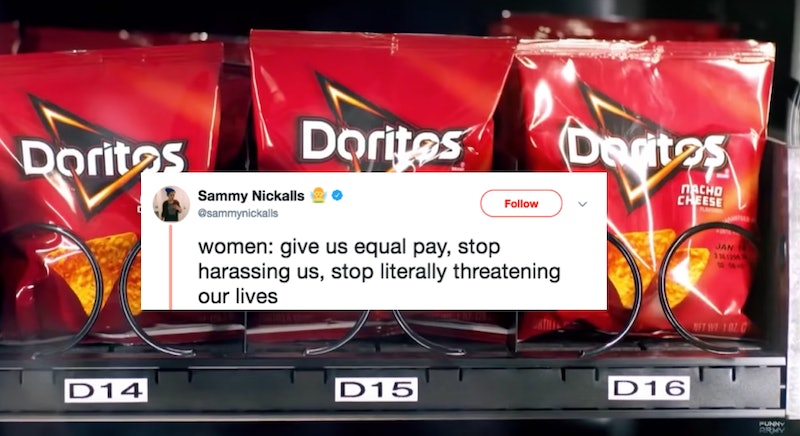 PepsiCo's CEO recently announced that the company will soon be releasing "lady-friendly" Doritos. The new version of the snack is reportedly designed to make less noise when crunched, make less of a mess on your hands, and fit into a purse. Following the announcement, many on Twitter were outraged about so-called lady Doritos, calling the notion sexist and pointing out that women have much more pressing needs than customized Doritos.

UPDATE: PepsiCo has released a statement: "The reporting on a specific Doritos product for female consumers is inaccurate. We already have Doritos for women — they're called Doritos, and they're enjoyed by millions of people every day. At the same time, we know needs and preferences continue to evolve and we're always looking for new ways to engage and delight our consumers."

EARLIER: PepsiCo CEO Indra Nooyi first discussed the concept of the women-targeted snack during an interview with Freakonomics Radio on Jan. 31. Nooyi told the show's host that research revealed that men and women enjoy snacks differently, prompting the product's development. As Nooyi put it:

When you eat out of a flex bag — one of our single-serve bags — especially as you watch a lot of the young guys eat the chips, they love their Doritos, and they lick their fingers with great glee, and when they reach the bottom of the bag they pour the little broken pieces into their mouth, because they don't want to lose that taste of the flavor, and the broken chips in the bottom. Women would love to do the same, but they don't. They don't like to crunch too loudly in public. And they don't lick their fingers generously and they don't like to pour the little broken pieces and the flavor into their mouth.

When further pressed about whether or not PepsiCo is making male and female versions of Doritos, Nooyi responded by saying that they are not necessarily different versions. Instead, she suggested that the newly-revealed product will represent "snacks for women that can be designed and packaged differently," adding:

For women, low-crunch, the full taste profile, not have so much of the flavor stick on the fingers, and how can you put it in a purse? Because women love to carry a snack in their purse. The whole design capability we built in PepsiCo was to allow design to work with innovation.

Many on social media were less-than-thrilled when they heard about the concept of women-oriented Doritos. Dozens of users pointed out that women had far more pressing concerns than acquiring Doritos that have less crunch. Several users noted women desire equality, respect, and freedom from harassment, among other things — and that lady Doritos certainly do not do anything to address these pervasive problems.

Moreover, many also took issue with the sexist message they believe is conveyed by the marketing of Doritos targeted toward women. As one Twitter user put it:

However, while people on social media were outraged, others had different reactions to Nooyi's interview. Caroline Siede, a freelancer writer, defended Nooyi's comments.

Yes, it's super sh*tty that we live in a society that socializes men and women to act differently and that giant companies then utilize and encourage that in their marketing schemes.

But the reality is this interview is both an empowering profile and an example of how society's fucked up gender norms work. And Indra Nooyi herself acknowledges that! She claims women would "love" to chow down on Doritos, but don't always feel that's socially acceptable.

PepsiCo has not yet announced a release date for the product, but don't expect the Twitter buzz to die down anytime soon.