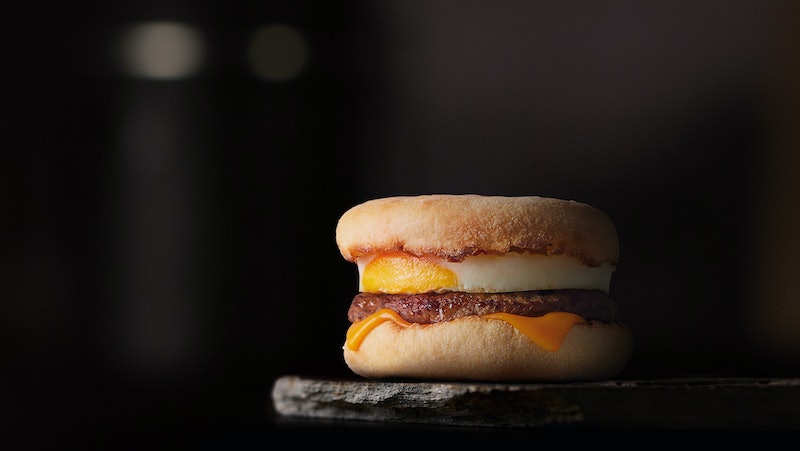 Is there anything quite so delicious and naughty as a McDonald's breakfast? Sneaking off to your nearest set of golden arches to snafferoo a paper bag of sweet joy. Yeah yeah it's not fat free yoghurt, fruit, and chia seeds but y'all — a little treat every now and again is pretty lit. Not only pretty lit, but low key self care. Especially if maybe the night before you accidentally drank a hen-do amount of fizzy wine. And now you feel a little, erm, fizzy. So news that McDonald's are changing their breakfast hours is pretty effing exciting. Because god knows dragging yourself out of bed pre 10.30 a.m. after a big night is hard AF.

So instead of 10.30 a.m. you will now be able to smash an egg McMuffin (and all the other delicious treats) until 11 a.m.

As with all good things, there is of course a catch. Yes, they reel you in with the hint of greatness and then smash your dreams to smithereens. OK maybe not that dramatic, but guys this is just a trial. They are trying it out in seven of the McDonald's restaurants in Portsmouth and the Isle of Wight. You know, to see if this is worth the extra half an hour.

Shout out to all you guys in Portsmouth and the Isle of Wight. Get down to Maccy D's every day to show support for the cause. Yes, every day for the next six weeks. I don't care about your fitness target. This is important, stop being selfish.

According to Pretty52, the head honcho of the franchises involved, Grant Cooper, is pretty psyched about the new services to be offered. "I'm thrilled to be bringing this service to my customers, and look forward to hearing their feedback," Cooper said.

OK this is all pretty dope. So the main thing you need to do right now is find out where these establishments are and pop a little pin at all the locations on your phone. For your convenience, they are the following locations.

If the prospect of this going franchise-wide isn't enough to excite you then you might also like to know that McDonald's is now available on Uber Eats in certain locations. Meaning not only could you potentially get that extra 30 minute reprieve but guys: without leaving the house. Which is, in all fairness, the hangover dream. Chuck umpteen Real Housewives on, kick back, be revolting. Dreamy.

In other exciting McDonald's news (the best kind of news), the franchise recently added some new burgers to its menu for summer. And all of them are inspired by food from the U.S. There's the Alabama chicken burger, the Mississippi stack, the Kansas City stack, and the Nashville chicken burger. They will also be re-introducing the New York stack and the South Carolina stack. Hallelujah! This is most definitely going to be the summer of nonstop McDonald's — I'll see you there for breakfast, lunch, and dinner.