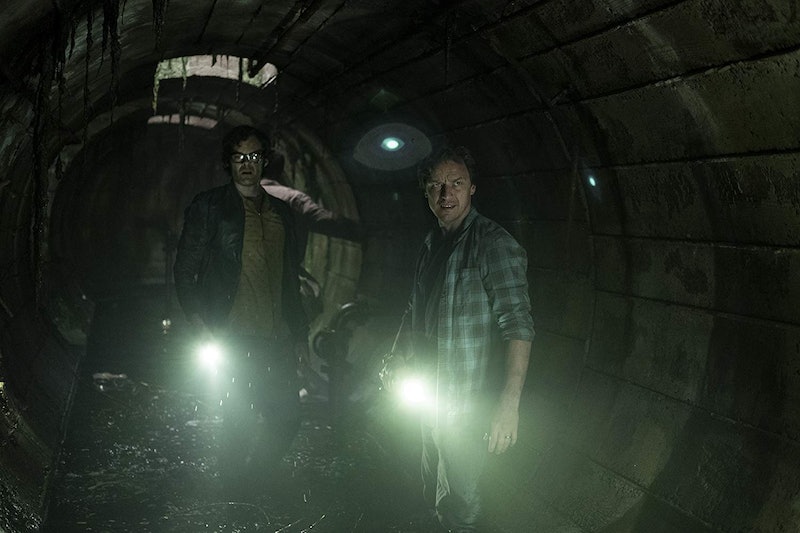 Pennywise (Bill Skaarsgård) the clown isn't just an evil clown. The child-tormenting creature in It and It Chapter Two (which premieres on Sept. 6) remains a mystery that the Losers have yet to fully comprehend. But in the first movie, viewers get some hints as to It's origins. Pennywise says that he is from the deadlights or is the deadlights. So before the sequel comes out, here's a refresher on this element of the novel author Stephen King's mythology.

In the 1986 book, the deadlights are a sea of destructive orange lights that drives most humans insane upon sight or ultimately kills them. It uses them to paralyze his victims before he completely consumes them. They are also probably responsible for the orange glow in Pennywise's eyes. In 2017's It, Beverly sees the deadlights when Pennywise unhinges his jaw, giving her a peek at his true form. She then goes dead-eyed, and floats in Pennywise’s cistern, that is until Ben (Jeremy Ray Taylor) rescues her with true love's kiss.

However, the reason that Pennywise also says that he comes from the deadlights is, as blog Bloody Disgusting points out, because it is also a "realm beyond the physical and thus unable to be contemplated by the human mind." This explains why anyone who is able to see them goes insane.

In a YouTube video, HN Entertainment explains that It is a cosmic being that isn't actually present in the human realm. And so its physical manifestations, the forms It shifts into, are merely vessels that It uses to harvest its victims. The forms It takes could then be interpreted to be portals to the deadlights, which consumes the flesh and soul of It's victims.

The Stephen King FANDOM site describes the deadlights as an "eldritch form of energy that originated from the preternatural dimension known as the Macroverse (also known as the Todash Darkness)." They not only exist in the It universe, but also extend to King's The Dark Tower novel series.

The deadlights in The Dark Tower are a type of magic that, when used, can "cause great suffering to the point of death, and even possibly did things to the affected victim's soul," per the FANDOM page. In fact, in the book Insomnia, The Crimson King — the primary antagonist in The Dark Tower series — uses the deadlights in Derry, Maine, which is where It is set, in order to ascend to another level of the Dark Tower.

As they pertain to The Dark Tower, the deadlights are also "an eternal force that always consumes," according to FANDOM. This is in contrast to a force known as "the Turtle," also known by the name Maturin — an eternal force that created everything and "vomited out our Universe when it had a stomach ache." Collider also notes that It considers the Turtle as an inferior enemy in the novel, but the only other creature near its status.

In summary, the deadlights are a whole universe that are key to more than just this one King story. And the author doesn't exactly provide a legend that explains everything about his creations, leaving room for reader's interpretation. That makes the horror Lovecraftian, speaking to our fears of the cosmic unknown.

But maybe audiences will get a little more information about that unknown in It Chapter Two.

More like this
Everything To Know About 'Evil' Season 4
By Meguire Hennes
Stephen Graham’s Wife Plays A Vital Role In His Career
By Emma Madden and Sophie McEvoy
What's New On Netflix: A Third '365 Days' Movie & Lili Reinhart’s New Film
By Arya Roshanian
Twitter Is At Odds Over Taylor Swift’s Possible ‘All Too Well’ Oscar Run
By Brad Witter
Get Even More From Bustle — Sign Up For The Newsletter