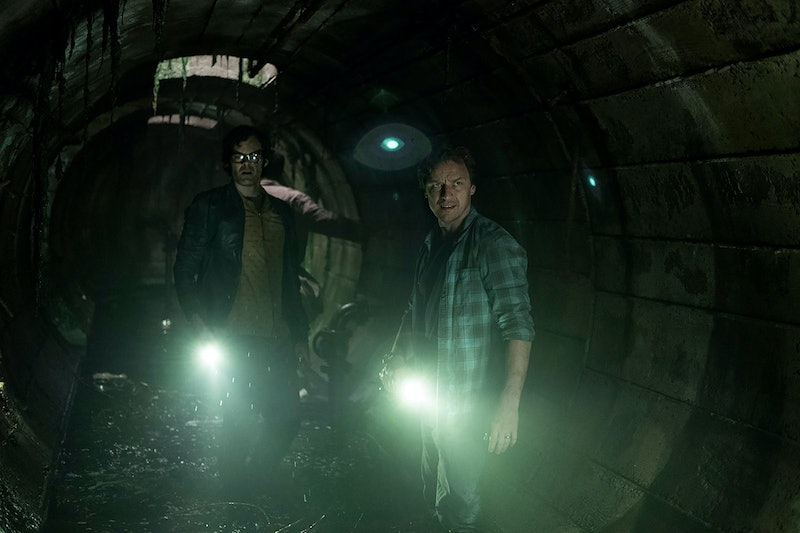 It Chapter Two is set to conclude the story by revealing what happens when the members of the Losers Club reunite 27 years after the events of the first film to take on Pennywise one final time. But a funny thing happens when the now-adult Losers get back together in their hometown of Derry. It seems they've all forgotten their first battle with the evil entity. So why do the adults forget in It Chapter Two? Was it just that they repressed their trauma, or is there something more sinister at work?

It's probably a little from column A and a little from column B. It and It Chapter Two are both based on Stephen King's 1986 novel It, and both films follow the original book pretty closely. The novel tells its story in a nonlinear fashion, with the Losers' Clubs two battles with It — one as children and again as adults — being woven together throughout. The films are taking a different approach, with It focusing only on the kids' story and Chapter Two focusing mostly on the adults' (though there will be flashbacks). But in the new film, like in the novel, the adults still don't remember Pennywise until they are called by Losers Club member Mike and told to return to Derry. So why is that?

The novel never fully explains why the Losers forget what happened to them as kids, but it does drop some hints that their lapsed memories are no mere coincidence. Not long after battling Pennywise as kids, all of the Losers — with the exception of Mike — move far away from Derry and go on to have successful careers. Gradually, they forget all about Pennywise, and mostly forget about each other. But Mike, because he stayed behind in Derry, is able to remember better than the others. And once 27 years pass and kids start disappearing again, Mike knows that Pennywise has returned. He then calls the other Losers and tells them they need to honor their oath (the oath they made at the end of the first film) and return to Derry to defeat Pennywise once and for all, and only after Mike jogs their memories do the other Losers remember Pennywise and what they went through as kids.

While blocking out childhood trauma can partly explain why the adults forget about It, many King fans also subscribe to a different theory. It has supernatural powers that allow it to influence what others see and feel. That's how it is able to go unnoticed by the adults in Derry, and why the adults never seem to get too bent out of shape when their kids go missing. The novel hints that Its powers extend to helping to cloud the memories of the Losers' Club, probably because it doesn't want to face them again since they already defeated it once.

It Chapter Two seems to lean into this theory, with Mike saying in the trailer that something happens to people when they leave Derry, as their memories become hazier the farther from the town they get. And if that is true, then any supernatural abilities of Derry can be traced to Pennywise, since the creature has resided in the town since ancient times.

There are likely several reasons as to why the adults forget about Pennywise in It Chapter Two, but the important thing to know is that they eventually regain their memories — and that's got to be bad news for a certain dancing clown.