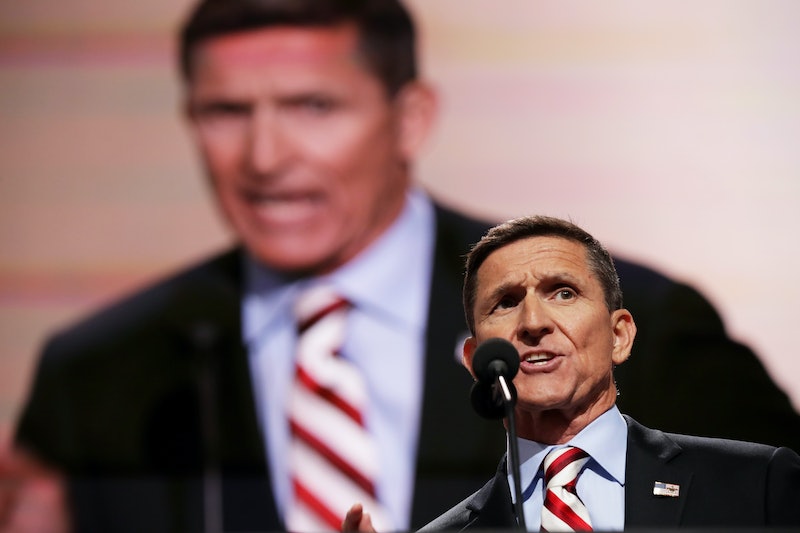 Speculation about special interests in politics is nothing new, but the alleged ties between Donald Trump and Russia are already historical in their breadth and depth. While much of this speculation comes from mostly unsubstantiated allegations (known as "raw intelligence" in the intelligence community), some of the most troubling accusations are related to Michael Flynn, one of Trump's national security advisers. Flynn allegedly has a close relationship with Russia, and other related allegations regarding that speculative relationship that could be damning in the wake of accusations that Russia conspired to help Trump win the presidency. In December, a spokesman for Russia president Vladimir Putin denied the hacking allegations. Bustle has reached out to the White House for comment about Flynn's alleged relationship with Russia.

Flynn's alleged relationship with the Kremlin could have begun as early as 2015, when Flynn was paid to speak at a gala for the 10th anniversary of Russia Today, the state-sponsored news agency on which he's appeared as a correspondent multiple times prior to taking a formal role with the Trump campaign. His ties to Russia didn't come under fire, however, until Trump's transition.

On Jan. 14, NPR reported that Flynn allegedly spoke with Russian ambassador Sergei Kislyak multiple times the day that President Obama announced sanctions against Russia. On Jan. 15, Vice President Mike Pence appeared on CBS's Face the Nation, and denied that the timing of their conversation was anything but coincidental.

On Feb. 9, the Washington Post published a piece claiming that intelligence officials had evidence showing that Flynn spoke on the phone multiple times with Russian Ambassador Sergei Kislyak during Trump's transition from election to inauguration. The WaPo piece also alleged that the security adviser discussed lifting sanctions on Russia that Obama placed on the country after an explosive post-election dossier alleged that Russia meddled in the presidential election.

On Monday, White House press secretary Sean Spicer released a statement about the accusations being made against Flynn.

On Monday evening, amid the allegations about Flynn's connections with Russia, CNN reported that Flynn had decided to step down from his position as Trump's national security adviser.