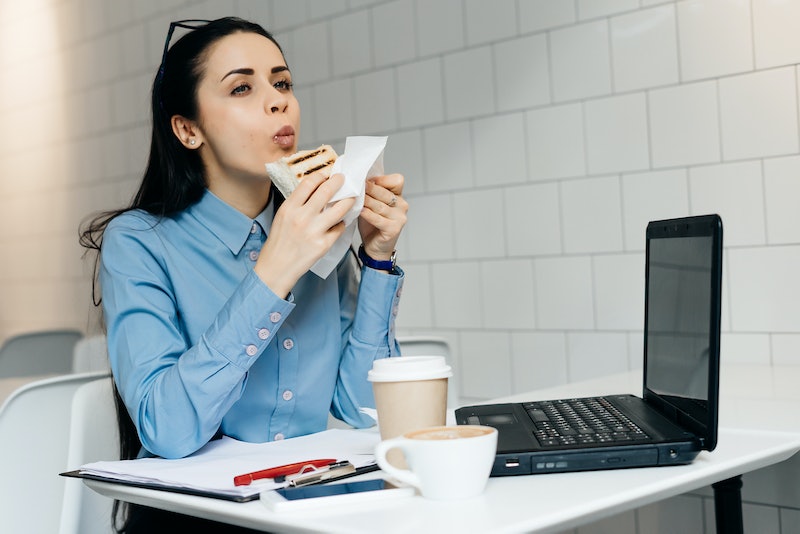 Eating at your computer, or al desko, as it's formally known, is a sad reality for a lot of people. In fact, it's kind of just how it is for most people in desk jobs. I'm not sure when exactly it became like that. But the thing about eating at your desk is, there's a lot more to consider than what food tickles your fancy. You really have to think about whether what you are eating might seriously tick your colleagues off. And this article about eating at your desk might be worth printing and laminating in your office space.

You heard me! Printing and laminating. To protect it from splashes from saucy, soupy meals.

In order to put together her article, BBC business reporter Katie Hope took to LinkedIn to ask whether there were any workplace rules for what you could or could not eat at your desk. The question came to Hope after a particularly pungent lunchtime in the news room at BBC.

Egg sandwiches, tinned fish, and boiled eggs are cited as the biggest offenders, according to Hope's findings.

But it seems as though, for some people, the smell alone isn't the entire problem. One of the people quoted in Hope's article is Daniel who works in the technology world. As well as stating that his office often "reeks of Chinese or fish" Daniel also pointed out that public mastication is also an issue and that scoffing ones lunch should really be relegated to the kitchen for the good of those around them and those actually doing the masticating. "This not only enforces people pulling themselves away from their screen for a break but also means you don't need to hear the person next to you chewing their food loudly whilst you are trying to concentrate," Daniel said.

According to the article, it's not only the whole snarfing your lunch al desko thing that is the issue for some people. Even snacking can be like red rag to a bull for your weary colleagues. Another person quoted in the piece is Carla, who works in sales. She has had it up to here with snacking. One savoury snack in particular she believes shouldn't actually be allowed in the office at all. The humble Twiglet.

"[Twiglets] should be banned from all offices — especially when two or three bags are eaten in succession — far too much crunching, deafening," Carla said.

I'm not sure about any current or former office workers, but did y'all get free bags of Twiglets? I never got one free Twiglet. Fuming.

So there you have it: smell, sound, and your own sanity are the three things to consider before tucking into a meal at your desk.

But how did this all come about in the first place? When did we start abandoning a lunch break and start eating over our laptops? According to research by KRC for Tork, which is the largest napkin supplier in the U.S., millennials are almost three times more likely than the Baby Boomer generation to believe that their colleagues would negatively judge them for taking a regular lunch break. AKA, people are worried about being viewed as lazy for stepping away from their desk for a well deserved break.

Yikes. Well, if you find yourself feeling unable to take a break, try to eat something less on the stinky or crunchy side. And save yourself a heck of a lot of side eye and sighing.