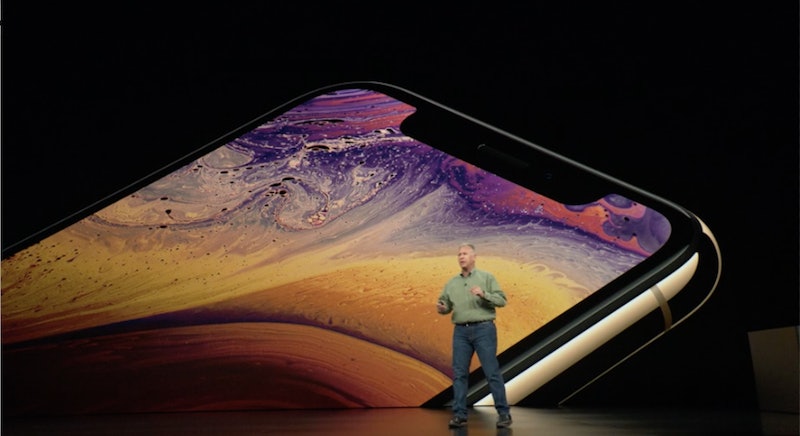 Before today’s highly anticipated Apple Event, one of the main questions on everyone’s mind was, of course, what are the new iPhones going to be? (In other words, what new iPhone am I going to drool after...until the next highly-anticipated Apple Event?) After Wednesday’s announcement, some iPhone rumors have been confirmed and a few new features may take you by surprise.

The brand new iPhone announced Wednesday is called the iPhone Xs. Tim Cook called the iPhone Xs “by far the most advanced iPhone we have ever created,” which is...pretty much exactly how Apple’s described every previous iPhone before. Rumors about the name “iPhone Xs” already prompted some reactions (read: jokes) on Twitter last week. Wednesday's Apple Event confirms that, yes, the new phone is called the iPhone Xs...or “extra small” or “excess” or “access” or “exes” depending on which wordplay you prefer. However, Apple prefers you pronounce it “ten ess.”

This new phone will also come in another other bigger size: the iPhone Xs Max, which is the largest of the new phones revealed. One of the most obvious differences in this new device is the naming convention Apple has previously followed — adding “Plus” or “C” to the successive iPhone editions — is no longer. The iPhone Xs Max, which would have previously been referred to as the “Plus” version, is the biggest iPhone ever with a 6.5 inch retina display.

A third new iPhone device was also announced: the iPhone Xr. Similar to previous “c” devices (a la the iPhone 5c), this iPhone will be a more affordable new option with slightly fewer features than its iPhone Xs siblings.

Perhaps most exciting about the iPhone Xr is the six (!!!) beautiful new colors it comes in: black, white, red, yellow, coral, and blue. (Shame that those colors will definitely have to be covered up by a phone case if you want to preserve your phone at all.)

Both the iPhone Xs and iPhone Xs Max follow in the footsteps of the iPhone X, both in name as well as in design and available features. Of course, this new, shiny iPhone also comes with some new, shiny features. Most notably, the iPhone Xs and Xs Max have incredibly powerful processing power, run by a new chip dubbed A12 Bionic, making both devices run up to 30 percent faster than previous iPhones. The photo capabilities are also pretty incredible, with the camera and photo editing able to capture and adjust depth of field to profession camera-level quality.

The iPhone Xr will also have a lot of the same features of these other two new phones. In addition to its new color options, the primary difference is its display: the iPhone Xr has an LCD display instead of an OLED display. So, the photos you take will not be quite as high-quality as those of the iPhone Xs models. However, the system processing capabilities are still powered by the A12 Bionic chip, making the device run faster than previous iPhone models.

The iPhone Xr comes in three storage sizes: 64GB, 128GB, and 256GB. Pricing will start at $749, making it less expensive than the iPhone 8 Plus. Preorder will start Oct. 19 and the iPhone Xr will be available Oct. 26.

Both the iPhone Xs and the iPhone Xs Max will come in three storage sizes: 64GB, 256GB, 512GB, which is enough storage for 200,000 phones on your phone if that’s the photo life you lead. The Xs will be priced at $999 and the Xs Max will be a hundred bucks more at $1099. You can start pre-ordering the iPhone Xs and Xs Max on Sept. 14 with the actual devices becoming initially available in some countries, including the U.S., on Sept. 21. Availability will extend to even more countries starting Sept. 28.