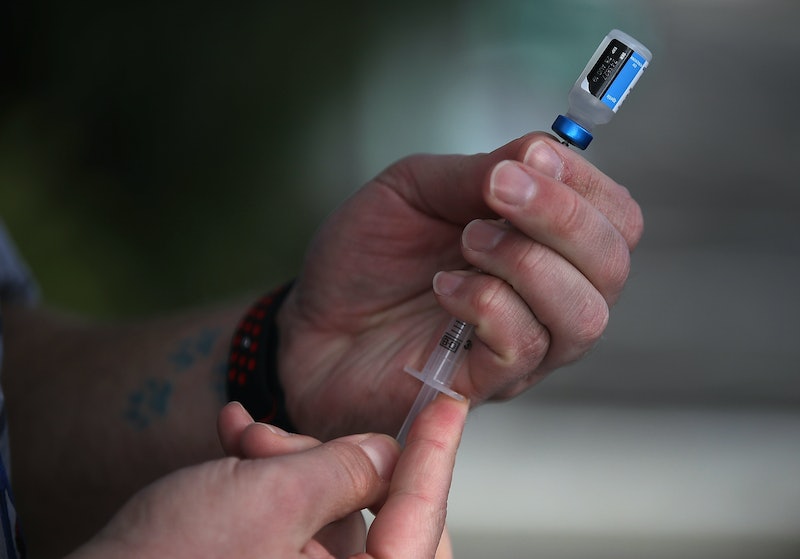 It's the ultimate winter edition of "Would You Rather"; would you rather endure an uncomfortable momentary shot of needle to flesh or a week confined to your bed because of the flu? There are some individuals who forgo protecting themselves against the viral infection because of a few myths. If you're contemplating the shot as a means of protection, you might be wondering what are the odds you'll get sick from the flu shot? It's a common reason why people stand clear of protecting themselves through this method.

While it would be great if taking a daily dose of vitamins and washing your hands would be enough of a powerful defense against becoming infected by the flu, unfortunately the infection is pesky. The 2018 is being recorded as one of the worst yet. And nobody likes being stuck in bed, unable to get comfortable or stop coughing because they've caught it. Fears of getting the flu shot are ~very real~. If not because of the whole needle part, because of the idea that it can actually do more harm than good. Like, actually be the reason you get the flu, which would totally contradict itself and be pointless to put yourself through. But experts say, this is a gross misconception.

According to Science Magazine, this week saw, "the percentage of U.S. outpatient visits for influenza like illness reached the third highest level in the past 15 years." It's harsh out there, folks. Being a homebody doesn't seem like a terrible character trait during any threatening flu season, especially 2018's season. The Center for Disease Control and Prevention quickly debunks the myth that one can get sick from getting the flu.

They report simply, "No, a flu shot cannot cause flu illness." And quickly follow up with good old-fashioned scientific evidence, saying, "In randomized, blinded studies, where some people get inactivated flu shots and others get salt-water shots, the only differences in symptoms was increased soreness in the arm and redness at the injection site among people who got the flu shot. There were no differences in terms of body aches, fever, cough, runny nose or sore throat." This is great news, considering that the flu shot can be a strong first line of defense against the illness.

So, why do people claim they get the flu after receiving a shot? Harvard Health Publishing explains the answer so that we can ~better educate~ ourselves on what happens post shot. They explain, "The vaccine is made from an inactivated virus that can't transmit infection. So people who get sick after receiving a flu vaccination were going to get sick anyway." It takes a week or two for the vaccine to kick in. If you got sick after the fact, the shot probably wasn't the catalyst. Thank your sneezing cubicle neighbor or the germ attracting subway pole we all cling onto.

~However~, there is something you should know about this flu season. Science Magazine also filled readers in on specific information about the certain type of flu floating it's nasty, germ-y self around the country. The cases are linked to a variety of the flu referred to as Type A, a sub type of H3N2. It's a not so easy flu to halt in its tracks. Not even, apparently, with the vaccine. Science Magazine writes, "Flu vaccines contain up to four different subtypes of the virus, and it’s long been known that their effectiveness against H3N2 is particularly low, only protecting people from disease about one-third of the time." Though the flu shot might not actually ~make~ you sick, there's a chance it might not be as effective as possible.

Whether you decide to get a flu shot or not is completely up to you. But if you do decide to get the shot, it seems as though the rumors are misconceptions and you cannot, in fact, catch the flu from the vaccine. Stay healthy out there!