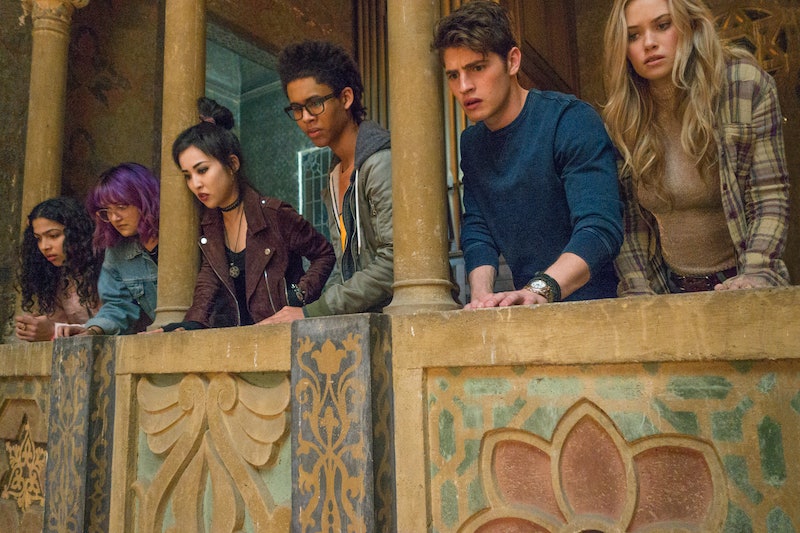 In yet another addition to the Marvel on-screen universe, Hulu's Runaways follows a group teenage superheroes who run away from home after finding out that their parents are all villains. It's an interesting twist on a traditional superhero narrative. And with an ensemble cast, there's a ton of room for different powers to play with. So, what are the Runaways' powers?

Given that the show is based on a Marvel comic book series of the same name, the spoilers are already out there. And though the show could certainly take certain liberties, it's probably safe to assume they'll stay true to the main themes, and broadly, the same superhuman powers. So if you don't want to wait for the Runaways series to reveal them to you, you can read on to learn what powers these embattled teenagers have in the comics. Spoilers!

According to Marvel's website, the character of Gert (Ariela Barer) has a special gift that allows her to control a time-traveling dinosaur that her parents gave her. She dubs the dinosaur Old Lace and takes on the name "Arsenic" as her own superhero alias. Another member of the Runaways, Nico (Lyrica Okano), discovers after leaving her parents that she can control the "mystical Staff of One," which her mother previously controlled, to wield magical powers. She also gives herself a badass pseudonym: Sister Grimm.

Another one of the teens goes by "Talkback," though his real name is Chase (Gregg Sulkin). He utilizes weaponized gloves as his main power, according to Marvel, and also steals other useful equipment from his evil scientist parents in order to help the group. Karolina (Virginia Gardner), a.k.a. "Lucy In The Sky," discovers after the confrontation with her parents that they were aliens, living on Earth after traveling from a different planet. This means Karolina herself is an alien; and this allows her to fly and use force-fields to her advantage. The youngest member of the Runaways, Molly, is a mutant, along with her parents. This gives her superhuman strength and endurance and leads to a very fitting nickname: Bruiser. Alex isn't quite as "super" as the others, but he is the brains behind the operation. He becomes somewhat of a leader to the group because of his natural intelligence and his skills with strategy and logic.

With powers and abilities this diverse, there's no telling what this group could pull off. And they have their work cut out for them with their evil, human-sacrificing parents.

"The audience goes on the journey with the Runaways because, along with the Runaways, they’re gonna find out information, through each episode, as to how evil their parents are, what exactly they’re doing, how they’re doing it, and how they’re gonna stop them," Gregg Sulkin, who plays Chase, told press at New York Comic-Con, according to Collider. "That continuously changes and develops. For the first three episodes, it is really a rollercoaster." Rhenzy Feliz, who plays Alex, agreed. "There are so many twists and turns in this," he said. "You see something going one way, and then they’ll say a line and it changes the entire series. It’s very, very fun to read. I wait by my email. Every five minutes, I check to see if we got a new script. It’s very exciting."

Executive producer of the show and co-creator of the original comics Brian K. Vaughan said though fans of the comics will be pleased, there are still some twists down the road for them, too. "[It] definitely deviates [from the comics], there are gonna be a lot of surprises, but it's a loving deviation," he said in an interview with ComicBook.com. "It shows respect to what people fell in love with. People fell in love with it for a reason, because it works, it worked and it was good, it was well thought out. What our showrunners and our writers have done a masterful job of is pacing this thing, and the suspense and the questions."

But first, the Runaways will have to learn about and harness their powers. Otherwise, Los Angeles — and maybe the world — are doomed.

More like this
'The Summer I Turned Pretty' Book Ending Is An Emotional Rollercoaster
By K.W. Colyard
The Future Of 'All Creatures Great & Small' Is Confirmed & Wedding Bells Are Ringing
By Rebecca Fearn and Frances Stewart
A New Season Of The Midwich Cuckoos Could Be Coming “To A Town Near You”
By El Hunt
'Criminal Record' Is The 'Doctor Who' Reunion We’ve All Been Waiting For
By El Hunt
Get Even More From Bustle — Sign Up For The Newsletter