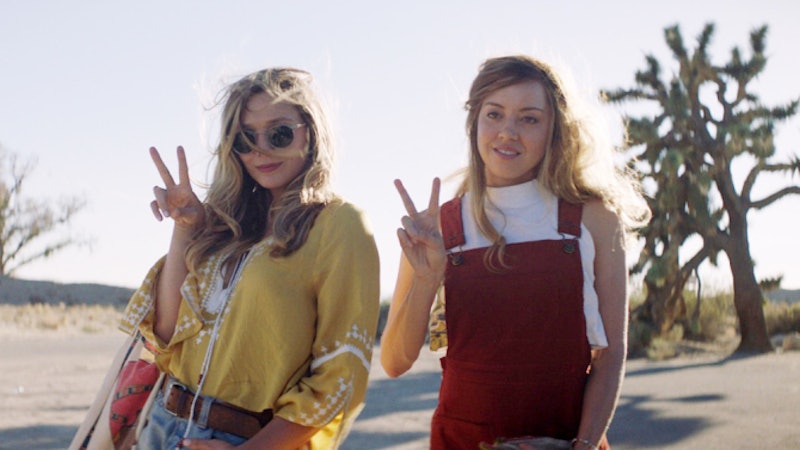 After seeing the new movie Ingrid Goes West, about a mentally ill 20-something who becomes obsessed with an Instagram-famous influencer from L.A., you'll never use social media the same way. Well, at least that's what you'd like to think will be the case. In reality, you'll probably watch the movie, take in its message about how our addiction to Instagram is dangerous, and go right back to clicking "like" on your friends' brunch photos a minute later. But, as unfortunate as that may be, Ingrid's stars, Elizabeth Olsen and Aubrey Plaza, say that's to be expected.

"The movie’s not intended to make people feel bad about going on their phones. It’s not an indictment on social media," says Olsen, speaking via phone with Plaza at her side. "It’s more about just highlighting where we’re at in terms of how we’re communicating with each other. So no, I don’t think a movie is gonna make people stop using their phones."

Still, even if Ingrid, out. Aug 11, doesn't have that effect, it might make you think twice about the type of content you post on social media. In the movie, Plaza's Ingrid becomes fixated on Olsen's Taylor after stumbling across her Instagram, which is filled with dreamy, highly-curated content of her seemingly perfect life, from photos of the world's prettiest avocado toast to snaps of her #magical trips to Joshua Tree. But as Ingrid eventually learns, Taylor's social media presence doesn't resemble her actual life in the slightest — and as Taylor learns, being an "influencer" with thousands of followers isn't always all it's cracked up to be.

For the actors, being on social media is inevitable, due to the nature of their careers, but both women are wary of its use and effects.

"For me it’s all about intent," says Plaza. "We just need to ask ourselves more questions and be more aware of how those kinds of things are affecting us and others. There’s a time and a place for it, but I think if it’s coming from a negative place, or a place of obstruction or hatred or anything like that, or something intended to make someone else feel bad... we just all need to be more aware."

Olsen's reasoning for being hesitant is different, but no less warranted. "I think from a friend to friend thing, it’s a way to share, the same way that Facebook was, but I do think it gets carried away," she explains. "[There's] the comparison of, 'your life looks prettier than my life,' and I think that that’s hard not to do, because it’s basically like looking through a magazine nonstop."

Anyone who's spent even a short period of time scrolling through Instagram can relate. As Ingrid Goes West shows, constantly seeing and "liking" someone's social media posts can sometimes lead to users doubting the importance of their own lives, or the desire to frame posts to be "cooler" than their reality actually is. It's such a pressure-filled and complicated zone that some people, like Olsen, resist joining platforms like Instagram altogether.

"I probably had a judgmental, condescending view on the whole thing," the actor says, referring to her life prior to joining Instagram. "I thought it was narcissistic culture and I thought it was kind of strange." Plaza, meanwhile, still holds that view, at least when it comes to one of social media's most popular aspects: "Selfies really do feel narcissistic to me," she says (although she's not immune to posting a few herself).

Still, both actors understand that social media can be all-consuming, and that it's easy for people to get sucked in. After all, over 700 million people use Instagram, according to MediaKix, with Business Insider reporting that we spend nearly 30 minutes a day on the site on average (which may seem low, but is actually a significant portion of the two hours and 42 minutes we spend on our phones daily). So while Ingrid's obsession with what she sees on Instagram might be more intense than most due to her mental illness — she stalks Taylor and frequently makes morally questionable choices — she's no less human.

"I’m sympathetic towards Ingrid, I feel sorry for her," says Olsen. "I don’t see her as a villain. I see her as acting out the worst kind of behavior that we all have a little bit of. I think we’re all inclined to feel the way that she feels and to want to do some of the things that she does, but we don’t allow ourselves to do it."

Ingrid's behavior is certainly disturbing — she stalks Taylor and imitates her every move — but it does make for great entertainment. Plaza says that to her, the character's instability and disturbing actions was a big factor in giving the film its comedy. "I think if you commit to a character that is behaving that way, it’s gonna be funny," says the actor, "because some of it is so extreme and so horrifying that you just have to laugh."

And she's right. Ingrid Goes West will probably make you laugh — and then, most likely, you'll walk out and tweet all about it.

More like this
Christina Perri Had No Idea Her 'Twilight' Song Is On YouTube's Top 100 Chart
By Radhika Menon
Angourie Rice Unleashes Her Inner Control Freak
By Jessica Derschowitz
In Rap Sh!t, Social Media Has Main Character Energy
By Aramide Tinubu
How Director Quinn Shephard Turned Dylan O’Brien Into A “Viral Weed Blogger”
By Samantha Leach
Get Even More From Bustle — Sign Up For The Newsletter