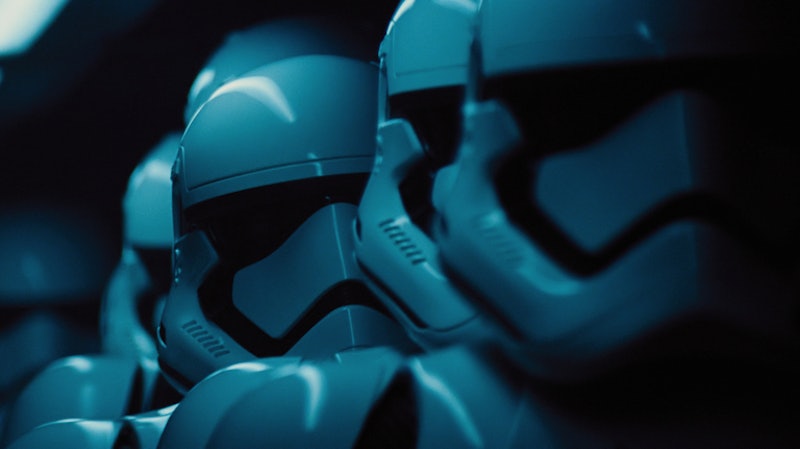 One of the more surprising and exciting things about Star Wars: The Force Awakens is that the Stormtroopers are actually people with personalities this time around. Hollywood's ultimate henchmen now count among their ranks characters like Finn, who's actually a good guy, and badass female Stormtrooper Captain Phasma. But why aren't the Stormtroopers clones anymore? After all, the second prequel film, Attack of the Clones, established that Stormtroopers got their start as clone troopers, as all of them were cloned by Palpatine based on the genetic material of bounty hunter Jango Fett. This way, the Galactic Republic had an endless supply of loyal soldiers at their beck and call. And by the time the Galactic Republic had become the Empire in the first-made Star Wars film, A New Hope, the clone troopers had been renamed the Imperial Stormtroopers (though this was a retcon, they're never called clones in the original trilogy). So what's with the non-clone Stormtroopers in The Force Awakens?

Well, the new film has different bad guys for one. The Empire is history, and it's now The First Order who's lording over the Dark Side. They don't have access to the old clone factories from years before, and the cloning program was retired a generation before the events of The Force Awakens, so the First Order uses Stormtroopers made up of regular people and not clones. So that's the reason that goes along with the plot, which makes enough sense, but is there more to this story behind the scenes?

The prequel movies are loathed by many Star Wars fans. The general consensus is that the films are a black eye on the franchise, and that they pale in comparison to the original trilogy. That being the case, pretty much everything that's come out about The Force Awakens suggests that the new film is largely ignoring the prequels and instead focusing on continuing the legacy of the original trilogy in a way that hopefully does the series justice. For example, when MTV News asked director J.J. Abrams if midi-chlorians, the microbes introduced in the prequels that are responsible for the Force, are mentioned in The Force Awakens, he gave a resounding no. There's also been a conscious rejection of the CGI overload present in the prequel films (like the all-CGI clone troopers) in favor of more practical effects for The Force Awakens , keeping with the spirit of the original trilogy. Plus, it's tough to ignore that every returning character that's been revealed is from the original trilogy, and not one character who was first introduced in the prequels is set to appear (sorry Jar Jar Binks fans).

So even without the canon backstory on his side, it seems likely that Abrams would have found a way around using clones for Stormtroopers in The Force Awakens. And that's fine by me.