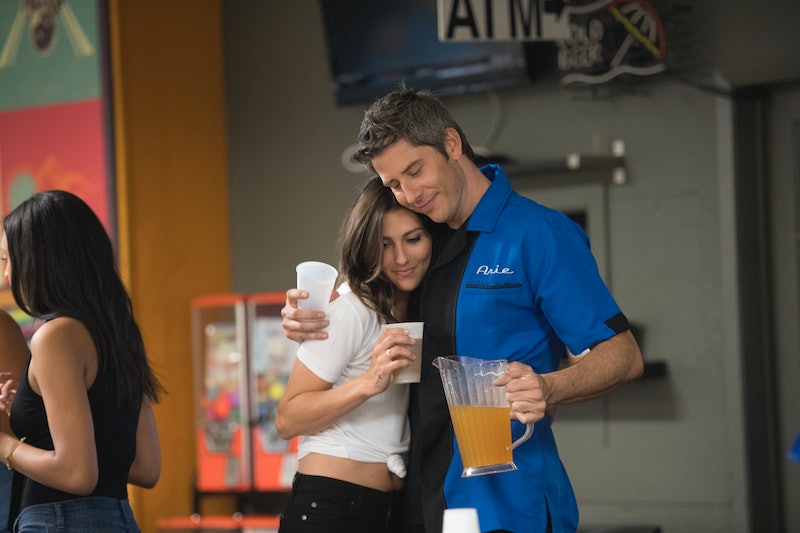 There are a few obvious frontrunners for every Bachelor season and often, it is obvious from the jump who those ladies are going to be. In Arie Luyendyk Jr.'s Bachelor run, the most blatant shoe-in for that final rose is most certainly Becca K. The publicist from Minnesota has been somewhat quiet, but she and Arie seem to have hit it off, and it seems very likely that she'll be sticking around. Of course, waiting for the finale to finally arrive is a huge bummer, but Becca K.'s Instagram may reveal something about her relationship status.

Becca K. cemented herself in "favorite" status early on. From the second that she stepped out of the limo on the first night at the mansion, she and Arie just seemed to click. She was even the first contestant to snag a one-on-one date for the season. In fact, in an interview with People, Arie gushed about how immediate his connection to Becca K. was. He said:

"On a night where everyone’s nerves, especially mine, were out of control, she stood out as someone I could be myself around. To me, that’s so important in a relationship. It didn’t hurt that she is also stunningly beautiful."

There is no way to definitively say for sure whether Becca K. is single or not after The Bachelor, but her Instagram account can at least give some clues, right? Well, unfortunately, it is a little tough to decipher the smattering of posts that have been showing up from Becca K. since filming for Season 22 of The Bachelor started back in September 2017. For one, she is seemingly very careful about what she posts, which is a requirement for those who go on the show. She also hasn't post that often about her personal life recently, which makes it even harder to determine where she is in her life right now, after the show has wrapped and a ring has been (possibly) slid onto the hand of one of the remaining women.

It is interesting to note that Becca K. has lately been relying a lot on photos of herself and the other ladies from The Bachelor for her Instagram content. There are only two photos of Arie on her feed, and one happens to be from behind him while he pretended to propose to her upon her arrival in the premiere episode of the season. Her caption playfully references Game Of Thrones and says that she "pulled a Daenerys" and made him "bend the knee." The second photo with Arie is another of the two of them on the first night. The the caption doesn't include a romantic quip or anything really complimentary about him at all, actually. Usually, contestants will post at least a couple of photos of the Bachelor and tend to at least seem slightly into him. Her funny but aloof captions makes it seem like she is not only single (or at least not engaged to Arie), but possibly not very happy with Arie now that filming has ceased.

The lack of personal details available on Becca K.'s Instagram could mean anything, really, as far as relationship status goes. On one hand, the secrecy could mean that she is hiding an engagement and trying to preserve the integrity of that legendary finale moment that Bachelor Nation waits so tirelessly for each season. One the other side, it could mean that she is nursing some heartbreak because the season didn't work out as nicely as she would have liked it to.

Becca K. is living her life and sharing fun memories on social media, whether or not she's with Arie or anyone else. The only sure way to see how their relationship pans out is to tune in to see whether Becca K. makes it through that final rose ceremony.