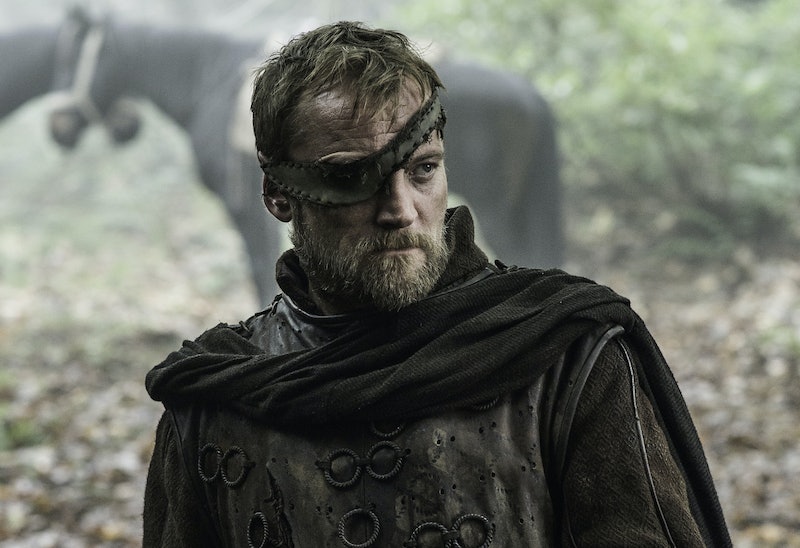 New photos from Game Of Thrones Season 7 have been released, and there was one character whose appearance was a bit of a shock. Yes, Beric Dondarrion will be back in Game of Thrones Season 7, and that should make things very interesting. After all, he's been around the block a few times before.

For those who don't remember Beric, who hasn't gotten much screen time in the previous six seasons, he was the guy who Ned Stark entrusted with keeping peace in the Riverlands. Played by Richard Dormer, he was the leader of the guerrilla group Brotherhood Without Banners, who's died six times and been resurrected just as many by Thoros of Myr, who, like Melisandre, follows the Lord of Light. Beric was actually the first character we ever saw brought back to life, way before Jon Snow. So it's not surprising that he looks a little worse for wear in these new photos.

We last saw Beric in Season 6 Episode 8, when Sandor "The Hound" Clegane meets up with the Brotherhood Without Banners. They're rolling with Thoros of Myr and Beric, who thinks The Hound would be a great addition to the group. (Sidenote: The Hound's brother The Mountain was the one who first killed Beric in a flame-filled battle. The Hound killed him the most recent time.) They're all now headed for the North to fight "the cold winds" that are rising.

In this new photo, Beric is riding atop a horse through the snow, which means they may have actually gotten there. But what happens when and if they do make it to the North? Well, first of all, this means The Hound and Sansa will be reunited, and that feels good. If you recall, he originally offered to take Sansa to Winterfell when things with Joffrey had gone from bad to worse. At the time, she declined.

But Beric is a Stark ally, which means Jon Snow should have some help when he takes on the White Walkers (and the ice spiders they may ride in on). As the King of the North has made clear, that's the biggest threat to the Seven Kingdoms. And that's something that Beric seems to understand, too, since he knew he had to make it north now more than ever. Beric should stay away from Arya, though, since he's on her kill list for selling Gendry to Melisandre back in Season 3. (We may not have seen him since, but there are rumors Gendry will also be back in Season 7.)

Beric riding into Winterfell also means Jon Snow could learn a little more about the whole resurrecting process. Back in Season 3, Beric told Arya that being resurrected isn't all it's cracked up to be. "Every time I come back, I'm a bit less," he said. "Pieces of you get chipped away." Since he doesn't heal completely when he comes back and loses a piece of himself, we have to wonder... what did Jon Snow lose? Luckily, we might just be on our way to figuring that out.