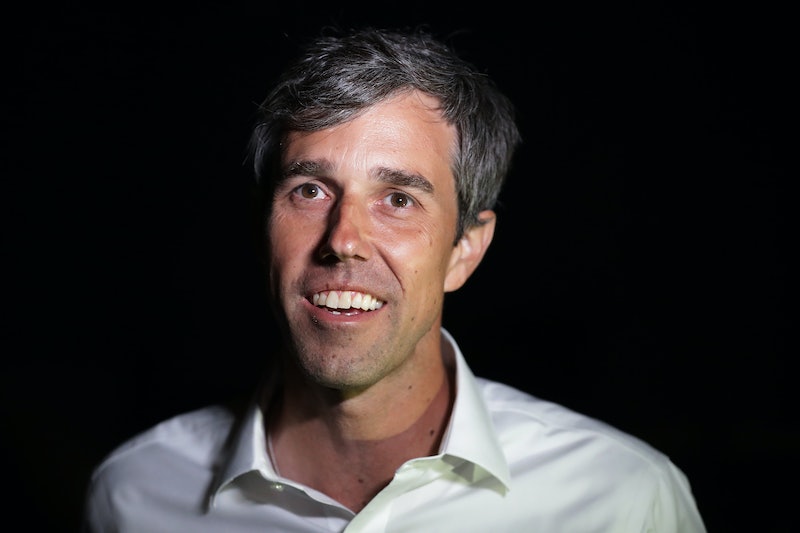 If you're one of the scores of Beto O'Rourke enthusiasts, you'll be happy to know the Texas representative has changed his tune on whether he'll make a bid for the presidency. He insisted before the midterms that he wasn't interested, but now — perhaps in light of the enormous grassroots support that brought him within three points of beating Ted Cruz in a red state — he seems to be reconsidering. Here's what O'Rourke has said about a 2020 presidential run.

First there were the unequivocal denials. In October, O'Rourke told a town hall audience that a 2020 bid was "a definitive no" for him. Of course, he basically spoke about that possibility within the context of a successful Senate race; he said he wouldn't campaign for the White House while serving in Congress but might consider doing so in the future. But O'Rourke has been even clearer at other times, telling The New York Times, for example, that he wouldn't consider becoming a candidate even if he lost the election to Cruz.

Then came the midterm elections, when Cruz did beat O'Rourke, though by a relatively narrow margin of 2.6 points, per The New York Times. According to The Texas Tribune, that's closer than any Democratic candidate for Senate has come to beating a Republican in Texas since 1978 — 40 years ago. That promise, in addition to the fact that O'Rourke is proven to have an ability to raise a windfall from donors (without PAC money) and a willingness to rethink traditional ways of campaigning, has made many hopeful about his prospects were he to run in 2020. And it also seems to have made him do some rethinking.

First there was the mysterious blog post he published on Medium about a week after the midterms. In a slow, stream-of-consciousness description, he illustrates a snowy jog he'd just taken in Washington D.C. The run took him from an area closer to the Capitol Building (where Congress holds sessions) to the White House. So... he was literally coming from Congress and "running" to the White House.

O'Rourke also described jogging up the steps of the Lincoln Memorial and reading inscriptions of the 16th president's second inaugural address. (Abraham Lincoln lost his bid for the Senate in 1855 but then went on to win the presidency in 1960 — a turnaround O'Rourke would have to pull off were he to make a bid in 2020.) He ended the blog post with the prophetic line, "I wondered if the winds had changed." Unsurprisingly, all of these metaphors encouraged people to dissect his post and speculate that he might be preparing for a genuine presidential "run."

Things got a bit less abstract on Monday when O'Rourke explicitly indicated that he's considering making a bid. During an El Paso town hall, he responded to a question on the topic by saying that his primary concerns until he leaves Congress on Jan. 3 are his family and serving Texas' 16th district. After he leaves, though, he said he and his wife intend to "think about what we can do next to contribute to the best of our ability to this community."

"How was that? Was that OK?" he joked to his wife in the audience.

"I want you to be president," a crowd member shouted, to which he responded by grinning and moving to another topic. After the event, reporters asked him to clarify whether his statements were a shift from his earlier vows not to run. O'Rourke confirmed that they were, and added that he and his wife were "thinking through a number of things" and have decided "not to rule anything out."

So, it seems like he's definitely giving the idea some serious consideration. It also seems that you won't know his decision for a while, which is normal, since most presidential contenders don't announce their intentions until spring in the year before an election year. But there's reason to believe that O'Rourke may go for it. If you're still feeling the "Beto Fever," you just might be in luck.