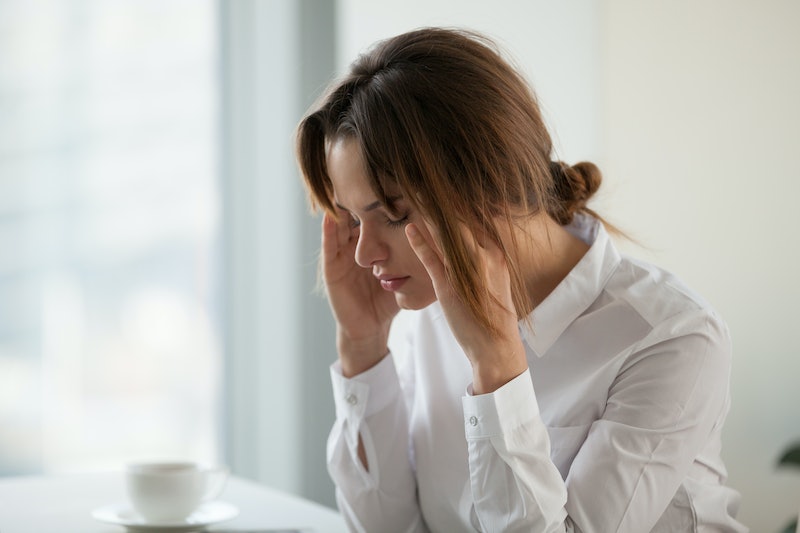 Have you been feeling forgetful lately? Can you not even remember if you've felt forgetful lately? Wait, how did you get here? Wait, where are your keys? Wait, what were you doing before you started reading this article about what causes memory loss and forgetfulness? If you've been on an epic run of forgetting your lunch, forgetting your rent check on the kitchen table, and forgetting that you're getting married this Sunday, it can be easy to assume the worst. But if you're not elderly, don't stress out too much just yet: Even if you're experiencing memory loss in your 20s, the odds are slim that your problems are being caused by the early onset of a neurological problem like dementia or Alzheimer's.

Rather, your memory problems likely stem from "a lack of focus and lack of paying attention," Dr. Douglas Scharre, MD, director of the Division of Cognitive Neurology at The Ohio State University Wexner Medical Center, tells Bustle. Everything from anxiety to poor sleep can undermine our ability to focus — and when "the mind is otherwise engaged on other topics, the individual does not pay attention to enough a degree to be able to recall things later on," says Scharre.

That isn't to say that just because you're young, there's no situation in which memory problems are cause for concern. If you're "forgetting names of close acquaintances: go see a doctor," Scharre notes. The same goes if you keep repeating the same question because you forgot you asked it, or you're continually finding objects in places you can't recall leaving them.

But if you're leaving your keys in the fridge because you got distracted putting away groceries, or struggling to remember the name of your college roommate's boyfriend's dog, there's probably nothing to be too worried about (even if you really liked that dog). You're likely just dealing with one of the issues below.

1. Why Am I So Forgetful? A Big Reason Is Stress

Though stress has a reputation as a memory-ruiner, in reality, Dr. Scharre notes, "stress often impacts focus and attention more than memory." But this can lessen your ability to recall new information: "If you are stressed, then your mind is often distracted with other concerns and thoughts, and is not focused on the issue/item you then later forget." Though this is a focus issue, when you experience it, this often feels like a memory problem.

When "your mind is otherwise overwhelmed with stress issues" while you're receiving information, "then that information is not stored into memory" and thus can't be recalled later, says Dr. Scharre.

2. Multitasking Can Also Mess With Your Memory

I'm sure you've read articles about how multitasking messes with your focus and leads you to complete tasks poorly or inefficiently — according to a 2017 Time article, only 2.5% of people can multitask effectively.

But it turns out that that spread-thin focus isn't just bad for anyone trying to do a decent job — it's bad for your memory, too. Overextending yourself with too many tasks can cause stress, which can cause you to become distracted and not store information properly. And frequent interruptions can make it hard for your brain to form new memories.

So only one tab open at a time from now on. Ha ha, sorry, just messing with you. But maybe try to keep it at somewhere under 10?

3. Lack Of Sleep Can Also Make You Forgetful

In case you were somehow not already obsessed with chronic lack of sleep and all the health problems it can foment, please know that it can also cause you to forget important birthdays, bat mitzvahs, and dental appointments (OK, maybe you forgot the dental appointment on purpose). Missing sleep can lead to stress and anxiety, which in turn can lead to forgetfulness, which can then lead to more stress, which can then lead to more forgetfulness.

4. Your Memory Can Also Be Affected By Depression & Other Mental Health Issues

Depression is just one of many medical problems that can cause forgetfulness. "Anything that can impact the brain may be a cause of memory issues" says Scharre, including "trauma, depression, sleep issues, sleep apnea, certain medications, thyroid disease, nutritional impairments, kidney disease, liver disease, diabetes, lipid disorders, etc." In fact, forgetfulness is even sometimes considered a symptom of depression.

Why can depression mess with your memory? Because people who are depressed might have difficulty focusing, which can prevent your brain from creating new memories.

But depression isn't permanent, and neither are depression-related memory issues: doctors find that our memories tend to go back to normal when we get a handle on our depression.

5. Certain Medications Can Impact Your Memory

Noticing that you never remember to lock the front door since you started taking paroxetine, or cimetidine, or desipramine? If you're on meds to treat anything from anxiety to Parkinson's, there's a chance that these could be negatively impacting your memory abilities.

But don't worry, you don't have to choose between being healthy and remembering your phone — there are alternative medications in almost every category that don't mess with your memory as much, should you find it's a major problem.

6. Focus Issues And Memory Problems Can Be Symptoms Of An Underactive Thyroid

Famous for its near-magical abilities to slow your metabolism, mess with your periods, skew your sense of temperature, and generally induce a feeling of sloth-style sluggishness, an underactive thyroid, or hypothyroidism, can also yield symptoms similar to depression, including memory issues and inability to focus. Luckily, slow thyroids can be fixed easily with medication.

More like this
The Best Time To Date After A Breakup, According To Experts
By Bustle Editors
Why Experts Say Sleeping With A Fan On Isn’t Totally Risk-Free
By Sophie McEvoy
20 Things You Should Never Tolerate In A Relationship
By Rachel Sanoff and Kathleen Ferraro
12 Ways You're Sabotaging Your Love Life
By Teresa Newsome and Lexi Inks
Get Even More From Bustle — Sign Up For The Newsletter

This article was originally published on May 19, 2015