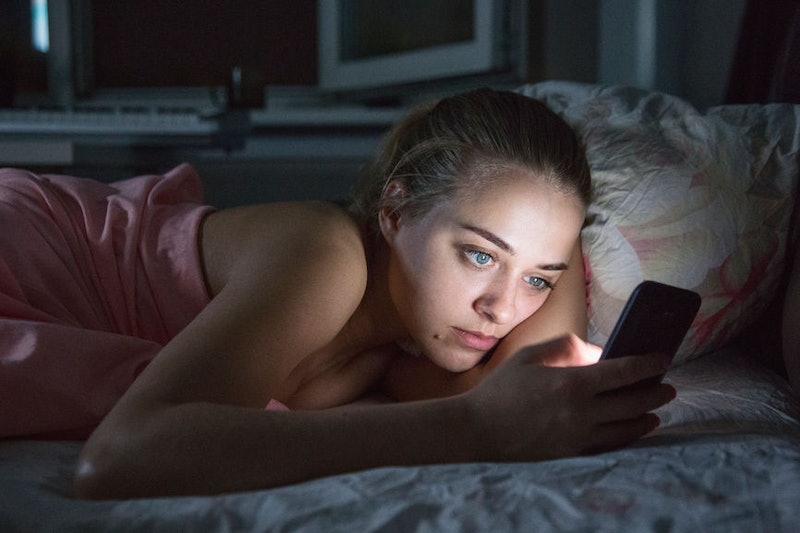 Have you ever woken up, looked at your phone, and realised you've sent a text in the middle of the night that you have no recollection of sending? It's scary, isn't it? Well, the behaviour has an official name and, according to a new study, it could be becoming a real problem for young people. But what causes sleep texting?

As Healthline reports, sleep texting forms part of a category of behaviours called parasomnia. These actions can involve things like walking, talking, or texting while asleep. According to Metro, sleep texting is believed to occur when a person enters REM sleep (that's the stage characterised by rapid eye movement and dreaming), allowing them to send a message without even thinking about it.

Experts aren't 100 percent sure what the cause of this type of parasomnia is. However, as Metro reports, they have noticed that people who use their phone just before they fall asleep may be more prone to automatically picking it up in the middle of the night and firing off an incomprehensible message. This could be because this particular behaviour was the last thing the brain remembered doing or simply because the phone is in easy reach. Motto: leave your phone in another room, kids.

A recently published study in the Journal of American College Health has found that sleep texting is a growing trend among young people. "Sleep texting occurs when an individual responds to or sends a text message electronically while in a sleep state. The beep or buzz of the cell phone indicating that a call has come in awakens the sleeper, who instinctively reaches over and responds to the message. This action can occur once or multiple times during the sleep cycle, adversely affecting the quality and the duration of the individual’s sleep," explains the study.

Researchers at Pennsylvania's Villanova University surveyed 372 students, asking them several questions about their phone use, the quality of their sleep, and how the two relate. Unsurprisingly, they found that 93 percent of students admitted to keeping their phone with them at night. What was surprising, however, was that a quarter of the respondents said they had experience of texting in their sleep. 72 percent of the sleep texters couldn't remember texting and 25 percent of them had no idea what the text even said.

"The lack of memory is not surprising as sleep research has found that people awakened after sleeping more than a few minutes are usually unable to recall the last few minutes before they fall asleep," the study's lead author Elizabeth B. Dowdell said in a statement.

And if you were worrying that you could potentially send your partner or your boss something wholly inappropriate, have no fear. The study also found that most of these sleep texts make no sense whatsoever. Of course, that doesn't mean that said inappropriate message could never happen, so it may be best to try and prevent a sleep texting scenario.

There are several easy things you can do. First, don't sleep with your phone under the pillow or next to your bed; basically anywhere that you can grab it without having to move considerably. Although leaving it in another room is probably the safest option, that may mean you never hear your alarm. If that's the case, try placing your phone on the opposite side of the room to your bed. That way, you'd have to get out of bed and walk across cold floor to reach it and that process is likely to wake you up.

Setting your phone to silent mode and getting into the habit of winding down from technology before you fall asleep may also help. Try reading a book or even watching TV, rather than shutting your eyes with your phone in your hand. Not only will this help halt sleep texting in its tracks but it's also likely to result in improved sleep too. I don't know about you but that's something I could definitely do with right now.