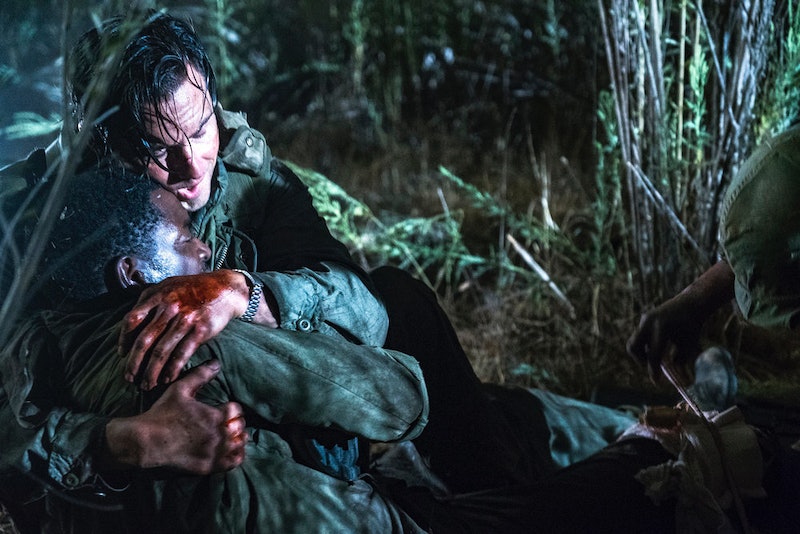 Jack Pearson rarely discussed his time in the military with his children. He hardly mentioned it, voluntarily, at all. And when he did acknowledge his experience at war, he brushed it off as something insignificant — that he was simply a mechanic; no more, no less. But as Season 3 of This Is Us continues to spill his story, it's apparent that Jack did a lot more than work on cars in the army. That's something Kevin discovers as an adult, and with the help of his documentarian girlfriend, Zoe, he decides to find out exactly what Jack did in Vietnam, and how it had such lasting impact on his life.

Episode 4, appropriately titled "Vietnam," gives viewers a deep dive into the old Jack. The soldier Jack. The Jack who wasn't yet a father. And although he was once a mechanic, that's not what he did in the military. Before he and his brother were sent overseas, they worked as mechanics together. In Vietnam, the episode revealed, the father of three was U.S. Army Staff Sergeant Jack Pearson. He wasn't just in battle, he led his fellow soldiers into it.

Kevin makes this discovery, years later, by reaching out to one of the few fellow soldiers of Jack's who remains alive — Mr. Robinson. Through flashbacks, viewers learn that Robinson and Jack were close friends. They shared dreams of going home and returning to a normal life. That's all shaken when a booby trap ignites battle in which Mr. Robinson is successfully targeted and loses a leg to an explosion. Jack tends to him before recruiting medics, saving his life. That's how Robinson recalls him when Kevin asks, but there are still some question marks around why and how Jack ended up on the front lines.

After all, according to the episode, he wasn't going to be drafted period because of a heart condition that would keep him from passing the necessary physicals. But he loopholed his way through that scenario to be near his brother, who was drafted by the lottery.

So now that we know Jack was not a mechanic during the war, and was in fact, a well-respected leader, there are still a few plot holes that need filling. Refinery29 points out a pretty big one — that it didn't take Jack long to become so highly decorated. In the timeline presented, according to R29, he had only been in Vietnam for less than 14 months when he was drilling those soldiers in Episode 4. That's not a lot of time for promotion. Knowing Jack, he probably made the ultimate sacrifice (as he does) for another comrade, earning him the role.

Whether or not that's the case, the real reason Jack traveled overseas — to protect his little brother, Nicky — hasn't fully unfolded yet, either. Fans know they did meet there, but the circumstances and conditions are still unclear. Hopefully those are questions to which Kevin will get answers as he makes his way to the place where it all happened in future episodes.