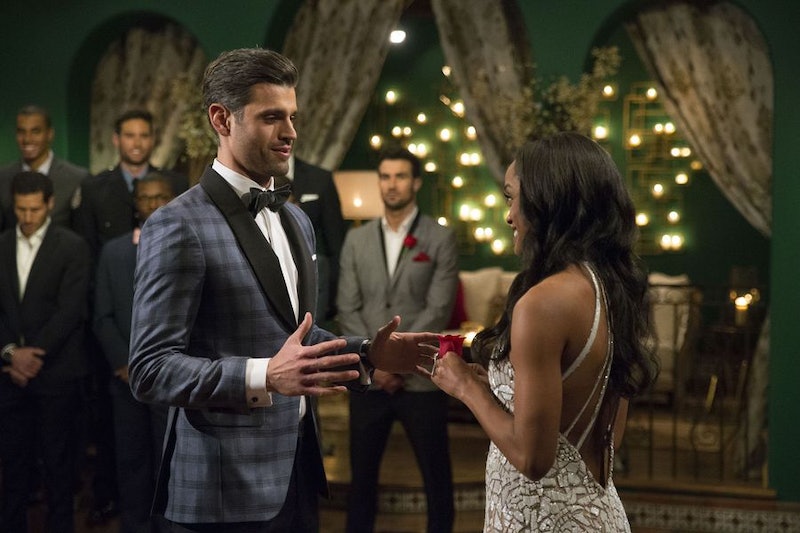 At the moment, he's still just a frontrunner on Rachel Lindsay's season of The Bachelorette, but I think Peter Kraus should be the next Bachelor. And, before you get nervous, don't worry. I haven't read Bachelorette spoilers, so I truly have no idea if this season ends with the 31-year old putting a ring on Rachel's finger or not. But assuming that it doesn't, and that he's back on the market post-show, I think Peter would be a great Bachelor. And you know your girl never shows up without receipts in hand, so I'm ready to explain why.

Sure, we've only had a few episodes with the model and personal trainer so far, but I think they've already been pretty telling. I've been wrong before — curse you, Juan Pablo Galavis — but I like what I see from Peter. He seems like a grounded, nice guy, who feels good about himself. He's confident, but it doesn't verge into cocky like the other contestants. And, above all, I think he's here for the #rightreasons. I think he's taking the process seriously, just like Rachel herself.

And since she's already my favorite Bachelorette of all time, I trust her judgment when it comes to menfolk. If she likes Peter, I like Peter. And I want him to help us continue the theme of Grade A Bachelors and Bachelorettes going forward. So, assuming he doesn't win the whole thing and walk away with Rachel Lindsay as a partner, here are the 16 reasons I want Peter Kraus as the next Bachelor.

1. He Shouldn't Win This Season

I might as well just come right out and say it: I don't think Peter is that into Rachel yet. I reserve the right to change my mind as the season unfolds, but, so far, I'm just not seeing that spark.

Oh, how my heart sang when Peter casually revealed to Rachel that he was in therapy, and they talked about it like it was perfectly normal. BECAUSE IT IS. Therapy is the best, I recommend it to anyone and everyone, and I love seeing it discussed on TV without all the weird stigma. And we'd get more of such conversations with Peter leading his own season.

I'm immediately suspicious of anyone who doesn't love dogs, so it was a relief to see Peter get along so well with Copper during their Palm Springs date.

Speaking of that Palm Springs date, how awesome was it that Peter agreed so readily to someone joining their one-on-one? Obviously, it turned out to be Copper, but Peter was on board even before he knew that. That made it clear that he isn't one of those guys who gets insecure and jealous, which I always appreciate. But specifically in the context of this show, that will take you really far.

5. His Best Friend Is A Woman

What's the opposite of a red flag? Because, whatever it is, I wanted to start waving it the moment I saw this photo on Peter's Instagram and read the caption referring to this woman as his BFF of 10 years. Her name is Mikka, and I smell an opportunity for her to come on and advise Peter on his own season.

6. He Hasn't Constantly Brought Race Into It

It's a low bar, sure, but not everyone is clearing it. So let's all take a moment to say a blessing for Peter's... I don't know... Ability to treat human beings as human beings?

7. He Has Great Fashion Sense

I can't be the only one who clocked Peter's suit on Night One. It had personality without being loud and fit him to perfection. I have a feeling there are a lot more suits where that came from, and I'd love to see a whole season's worth.

That conversation with Rachel about their gap teeth warmed my heart, because it was even more proof that Peter feels good in his own skin. And when someone feels that way about themselves, it means they're ready to be a good partner to someone else.

Do you have any idea how rare that is for a man in this franchise?

10. He's Not Beefing With The Other Guys

Even the ones who might deserve to be beefed with. (I'm looking at you, Whaboom and Blake. Would never say such a thing against Kenny, who is my angel.)

11. You Can Never Have Too Many Guys From Wisconsin

I don't want to name names here. But let's just say that the last Bachelor from Wisconsin's name starts with an "N" and ends with an "ick Viall," and he was not my favorite. Peter would provide a different kind of Wisconsin rep.

Also on that Palm Springs one-on-one, Peter made it clear that he was willing to move anywhere. That's a great attitude to have going into your own season of The Bachelor

13. He Has A Flexible Career

Just so we're clear, that willing-to-go-anywhere stuff wasn't just lip service. As a personal trainer, Peter really can take clients anywhere. Which also means he would be able to work around the filming schedule without having to give up his job. How convenient! And, if that sounds familiar, it's because Rachel did the same thing. The now-wrapped Bachelorette is already back at her job as an attorney while her season airs. Long may she reign.

I seriously can't say it any better than that caption. Even casually following Peter on Instagram makes me worried for my ovaries.

Here's the two of them having a mother-son day at a football game. I like rewarding that kind of dedication to family.

Sorry. I said all the other stuff first, but I'm not above the basics. A hot guy who doesn't take himself seriously is impossible to find, but that seems to be Peter's MO.

And all of this comes from just a few episodes of knowing him. Imagine how much more convinced I'll be that Peter should be the Bachelor by the time the show wraps up. Just cross your fingers that he stays on the market, ladies, because you could get your very own chance to woo him on national television.