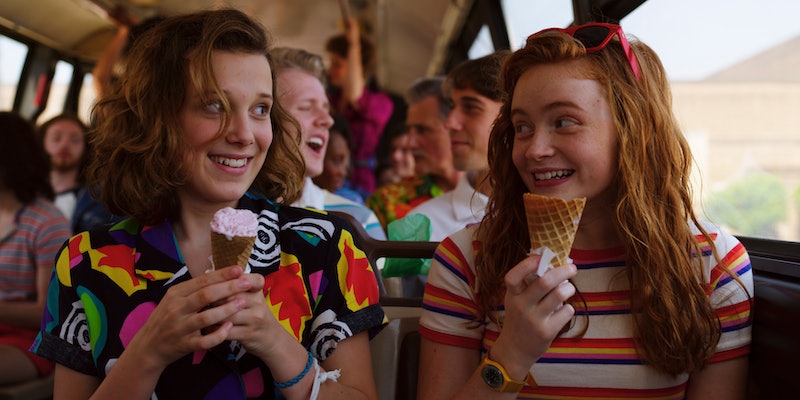 While there was definitely bit of tension between the two during the series' second season, Eleven and Max's friendship in Stranger Things 3 proves that girl power is alive and well in Hawkins, Indiana, according to a new interview with Nerdist. Not only that, Millie Bobby Brown (who plays Eleven) and Sadie Sink (Max) told the outlet that their real-life friendship had a significant impact on that of their characters' on the show.

So, just as a brief refresher, Max didn't come onto the Stranger Things scene until Season 2. Up until that point, Eleven had been the only girl in the Dungeons and Dragons boys crew. That all changed when she spent the majority of the second season on her own personal quest, and Max ended up skateboarding her way into the guys' group.

When Eleven and Max finally crossed paths towards the end of Season 2, they didn't exactly hit it off. But it seems as if that's all set to change in the show's third season — thanks, in part, to how close Brown and Sink have recently become themselves. "Most of the show for the first two season kind of revolves around the boys and their friendship," Sink told Nerdist in an interview published on June 24. "So it’s interesting to see two girls’ friendship, especially since we’re friends in life."

Following the end of filming Season 2, Sink expressed her desire for Max and Eleven to find some common ground while speaking to Bustle back in December 2017. "I'd love to see some girl power, maybe like Max, Eleven, and Nancy all team up or something like that," Sink confessed. "That'd be pretty cool. I think Eleven and Max could make a really good team."

Seems like the Duffer Brothers heard Sink loud and clear, because one of the trailers for Season 3 gives fans a quick glimpse into the really good team that Eleven and Max have become. "Max kind of takes Eleven under her wing and introduces her to the real world — shopping, having fun," Sink told Nerdist of the two girls' bond. "It’s really cool!" Brown exclaimed.

As for how that friendship ended up coming to be, Brown explained to the outlet, "You know, when you don’t really like someone and you’re in a friend group, and then you’re just in that friend group for so long that you’re like, 'All right, I’m gonna learn to like this person.' That’s kind of what Max and Eleven did."

Wondering how Eleven and Max will harness their newfound friendship to fight the evil lurking in their small town? Luckily, you won't have to wait long. Stranger Things 3 hits Netflix on July 4, and hopefully fans will get to see these two take on the evil forces of the Upside Down and save the day.