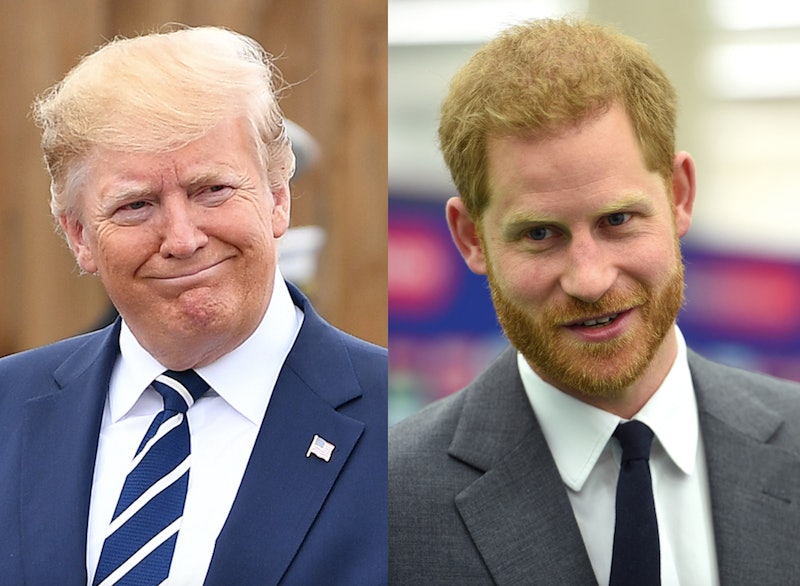 As the president's visit to the United Kingdom continues, his relationships with various members of the British royal family have remained under scrutiny — and none more so than with Meghan Markle. On Monday, the president spoke with her husband, and while the details surrounding what Trump and Prince Harry talked about have not been reported on, the president revealed that one subject was not broached: his wife.

"We didn't talk about it," Trump told Piers Morgan in an interview that aired Wednesday, per CNN. "I was going to because it was so falsely put out there."

During an interview with The Sun earlier this week, President Trump learned that Markle had once spoke out against him during the 2016 presidential election, remarking, among other things, that he was "misogynistic," People reports. She also reportedly said that she would move to Canada if he won the presidency.

When confronted with this in the lead-up to his trip across the pond and asked if he was aware that Markle had said this, Trump said he wasn't.

Distinguishing whether or not Trump called Meghan "nasty," or whether he meant she had said nasty things about him has caused quite a kerfuffle. The president has maintained that he was describing her behavior.

He continued, "She was nasty to me. And that's OK for her to be nasty. It's not good for me to be nasty to her, and I wasn't."

Trump had previously defended himself on Twitter, after his original remarks began to circulate.

"I never called Meghan Markle 'nasty,'" President Trump tweeted Sunday morning, shortly before he would depart for his flight overseas. "Made up by the Fake News Media, and they got caught cold! Will @CNN, @nytimes and others apologize? Doubt it!"

Trump did not meet with Markle during his trip to the UK, as she is currently on maternity leave, according to reports. It's unknown whether he would have interacted directly with her if she hadn't recently given birth.

Although Trump did not share many details about his conversation with Prince Harry, he did praise him, as well as his family.

“I think he’s a terrific guy," Trump said, according to People. "The royal family is really nice."

The British royal family has many fans in the United States, and especially Markle, given that she is American and used to work as an actress. When reports indicating that the president described her comments as "nasty" began to circulate, his remarks drew attention, immediately. However, Trump has been quick to say that he does not have any ill will against the duchess or Prince Harry.