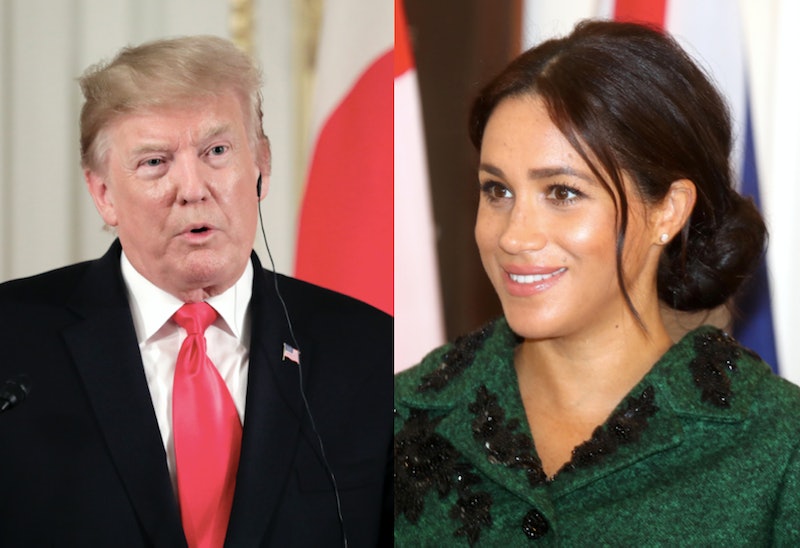 On Monday, President Donald Trump will travel to the United Kingdom for an official state visit, but controversy is already ensuing. In a taped interview with British newspaper The Sun, Trump called Meghan Markle "nasty" for comments she made about his run for president in 2016. On Twitter, Trump denied ever describing the American-born duchess in such terms, although audio footage indicates that he described her remarks that way.

"I never called Meghan Markle 'nasty,'" President Trump tweeted Sunday morning. "Made up by the Fake News Media, and they got caught cold! Will @CNN, @nytimes and others apologize? Doubt it!"

In the Sun interview clip, which has now circulated widely on Twitter, a reporter asked Trump whether he was disappointed that he won't be seeing Markle during his trip, given that she is on maternity leave. The reporter notes that Markle "said she would move to Canada" if Trump were elected.

The clip caused a bit of an uproar on social media. As is often true with the British royal family, Markle has a lot of fans in the United States. In her case, this is especially true given that she is both American and a former actress.

Although striking in and of itself, Trump's remarks are reflective of the way he typically speaks about those who oppose him. Famously, he described his then-opponent Hillary Clinton as "such a nasty woman" during a 2016 presidential debate. (The remark, which was quickly reclaimed by Trump's critics, prompted merchandise, memes, and even tattoos bearing the phrase.)

Notably, Trump didn't disparage Markle during the interview clip beyond his characterization of her comments during the 2016 election. He also remarks that he thinks "it’s nice” that the United Kingdom has a princess from America.

"I’m sure she will do excellently," Trump said of Markle. "She will be very good."

During Trump's visit to the UK, he will meet with a variety of British dignitaries, both within the royal family and outside of it, per Vox. His itinerary includes a breakfast meeting with Prime Minister Theresa May, a formal banquet at Buckingham Palace, and tea with Prince Charles and Camilla, Duchess of Cornwall, Vox reports.

ABC News reports that protests against Trump are planned for both Monday and Tuesday, according to public Facebook events. Pointing to the amount of responses on the event pages, the news outlet has indicated that Tuesday's event may be the more significant of the two. Only 200 or so people have said they are going to Monday's protest, which is scheduled to take place during the banquet; about 8,000 have said they are attending the demonstration on Tuesday.

The United Kingdom is the middle of a tense political moment, as Brexit agreements have repeatedly stalled out. The situation has grown so intense that May announced just last week that she would resign from her position, possibly as soon as July, according to The New York Times.

And while it's unclear how Trump's UK visit will ultimately play out, what is clear is that the president's relationship to the royal family is already drawing headlines.