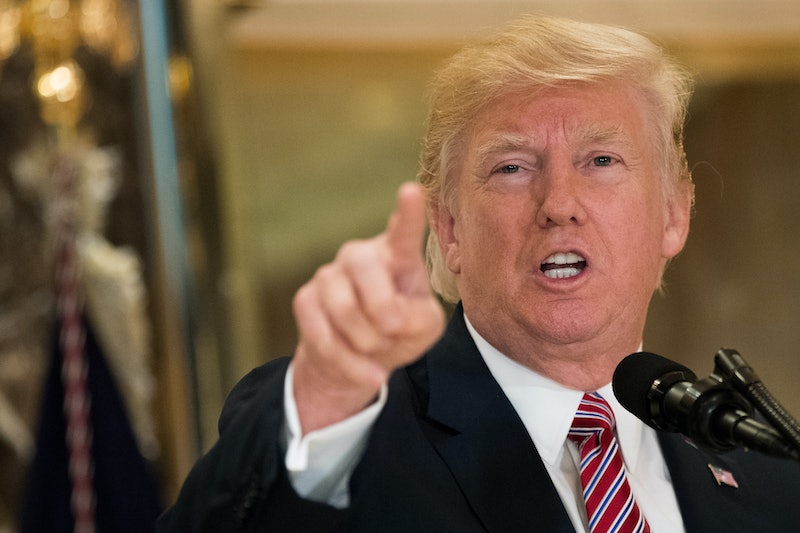 Sometimes the third time isn't a charm. President Trump gave a third speech about Charlottesville on Tuesday afternoon, doubling down on his "many sides" comment, but this time placing part of the blame squarely on the "alt-left's" shoulders. The alt-left is partly responsible for the violence in Charlottesville, Trump claimed, but nobody wants to say it.

Oh, and he defended Confederate statues, because George Washington had slaves.

If that gets you a little heated, you're not alone. Twitter was absolutely livid after Trump's press conference, and they weren't afraid to let him know it.

Many felt that Trump was simply parroting what white nationalists are saying. The "alt-left" is not a thing like the alt-right is. The alt-right is defined by the Southern Poverty Law Center as an extremist ideology based on "white identity." They rail against "political correctness" and "social justice warriors" and now they are praising Trump for his comments — like David Duke, a former leader of the KKK, who immediately wrote on Twitter:

Thank you President Trump for your honesty & courage to tell the truth about #Charlottesville & condemn the leftist terrorists in BLM/Antifa.

This praise by white supremacists was rebutted online by anti-racists who furiously condemned Trump's newest comments and laid bare what Trump really stands for.

He Declined To Call It Terrorism

It's Not The Same

This Is Who He Is

This Is The ACTUAL President Taking The Pressure Off Of Nazis

So Did Captain America

There's a lot to think about regarding the way Trump has handled the violence in Charlottesville. But if you think about one thing, think about this: One woman was killed by a white supremacist when he drove his car into a crowd of anti-racist protesters. Her name was Heather Heyer, and she died fighting against hate. Don't forget that.