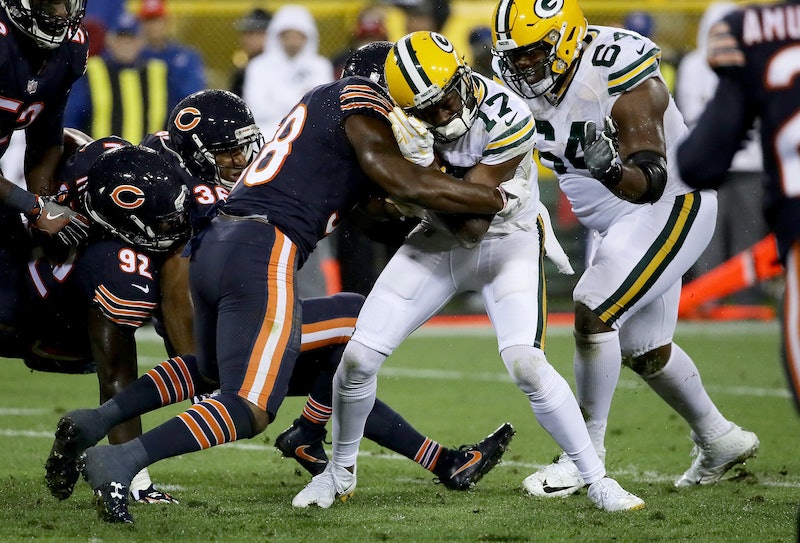 Last week, like so many areas of American life that have typically been insulated from presidential politics, the world of professional sports became embroiled in controversy thanks to the president of the United States. In an angry speech to a crowd of supporters in Alabama, Trump attacked NFL players who've protested police brutality during the national anthem, calling them "son of a b*tch" and demanding they be fired. But that wasn't all he said ― there was another awful thing Trump said about the safety of NFL players that you might not have noticed, but after what happened on Thursday night, it should be getting every bit as much attention and scrutiny.

In a slightly rambling digression amid his attacks on protesting players, Trump criticized the NFL for implementing new rules aimed at protecting player safety:

Today if you hit too hard, they hit too hard, 15 yards, throw him out of the game. They had that last week, I watched for a couple of minutes, two guys, just really beautiful tackle. Boom, 15 yards! The referee gets on television, his wife is sitting at home, she's so proud of him. They're ruining the game!

There's a very good reason for the rules Trump railed against, in this case a 15-yard penalty for hitting a defenseless player in the head and/or helmet area. They're intended to protect players, especially defenseless receivers, from brutal hits and tackles that could imperil not just their health, but their whole lives.

Thanks to the ever-expanding understanding of how repeated concussions impact the human brain, and the stunning number of ex-NFL players whose brains have shown signs of the neurodegenerative condition CTE (chronic traumatic encephalopathy), the moral imperative of such rules has never been more obvious. But Trump clearly doesn't like them.

Unfortunately, during Thursday night's featured NFL game between the Chicago Bears and the Green Bay Packers, America got a harrowing view of exactly the kind of hit Trump was describing.

Be forewarned, the video is disturbing, showing Packers receiver Davante Adams taking a shot to the head and having to be carted off the field. It may, however, help you appreciate the full disgrace of Trump's angrily stated negligence towards player safety.

To be clear, it's not as if there's a way to totally avoid these sorts of injuries. Although the hit has been widely condemned as a dangerous cheap shot less than 24 hours later, football is an inherently violent game, at least as it exists now.

Implementing rules and a structure of penalty and punishment around hits like these is more than just a matter of common sense. Really, it's a matter of basic human decency. It's almost the bare minimum that a person can advocate to prove they care about the safety of the players on the field. More than just players, in fact ― other human beings, with lives, futures, and breakable bodies and brains just like anyone you might see walking down the street.

There's a clear through-line between Trump's attacks on NFL protests and his disdain for penalizing these sorts of dangerous hits: It's the commodification of players and their bodies, the sense that they exist to entertain, not to have opinions or thoughts or rights of their own. And, obviously, the notion that they either don't want, don't deserve, or shouldn't have any rules in place to protect them from devastating risks of their chosen profession.

When Adams slumped to the ground motionless on Thursday night, and had to be carried off the field and taken from the stadium in an ambulance, some people on social media quickly recalled the president's outrage about the safety penalties.

According to NBC, Adams spent the night in the hospital, and was diagnosed with a concussion. Contrary to Trump's vision of the NFL outlined during his Alabama rally, in which players were being kicked out of the game by officials due to overly violent hits, the Chicago Bears player who tackled Adams, Danny Trevathan, was allowed to continue playing.

As NBC Sports notes, there hasn't yet been any word from the league whether the referees made an error in allowing Trevathan to stay in the game. But from the sounds of things, assuming his views really are consistent with what he said to that throng of supporters in Alabama, if he'd been thrown out, Trump would've been galled, considering it just another example of coddling players and "ruining the game."