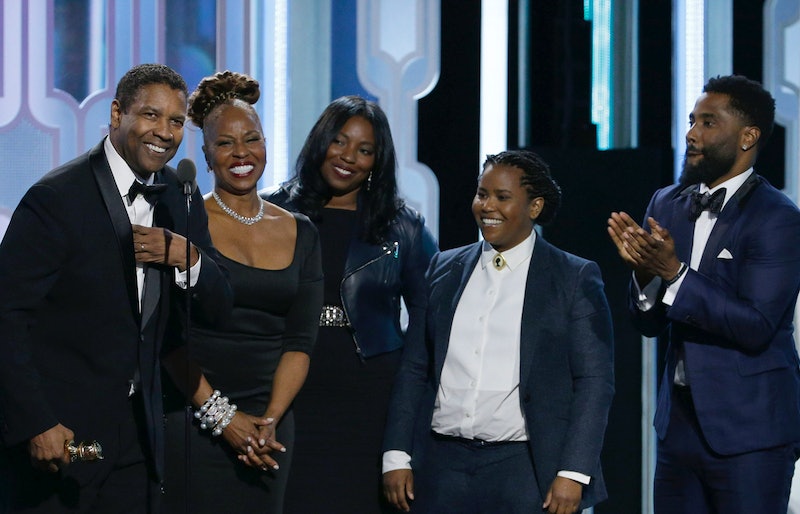 It must be hard to avoid catching the acting bug when you grow up in Hollywood. But what's it like to grow up wanting to act when your dad is a two-time Academy Award winning actor? Denzel Washington's children certainly have big shoes to fill, but they're well on their way to being stars in their own right. The Washington children have all either taken to the stage, captured the public's attention on screen, or worked behind the scenes over the years. Even Washington's wife, Pauletta, is an actor. So it comes as no surprise that the Fences actor made the 2016 Golden Globes a family affair last year when he accepted the Cecil B. DeMille Lifetime Achievement Award. But since then, his kids have been busy making names for themselves in showbiz.

While Washington's eldest son John David and daughter Katia have already been featured in popular films and TV shows, his younger twins, Malcolm and Olivia, are just getting started. Armed with degrees in theater and film, and, of course, their famous father's acting tips, the Washington children have what it takes to take over Hollywood. As the Washington family anxiously awaits to find out if their patriarch will take home yet another Oscar for his role in Fences, check out what his kids have been up to around La La Land.

Besides turning heads at award shows, John David Washington is establishing a successful acting career for himself. The 32-year-old Morehouse alum plays hothead Ricky Jerret on the HBO comedy series Ballers, and made his big screen debut at age 9 as a student in his father's 1992 film Malcolm X, according to his IMDb page. John David also helped his dad co-produce his 2010 thriller film The Book of Eli, and recently starred in Spike Lee's BlacKkKlansman. Before dabbling in acting, John David played professional football and was briefly signed to St. Louis Rams as a running back, according to Sports Illustrated.

Yale graduate Katia was put into the spotlight after her father told GQ that she worked on the 2012 Quentin Tarantino film Django Unchained. The film's IMDb page says the 28-year-old served as a editorial production assistant. "My oldest daughter — I see her digging her independence," Washington told the magazine. "She doesn't like me talking about it, but she's working with Tarantino." According to Katia's IMDb page, she also worked as an associate producer on her father's film Fences and served as an assistant on Nate Parker's The Birth of a Nation.

Much like his older brother, Malcolm Washington started out in sports before making the transition to show business. The 25-year-old played point guard on the University of Pennsylvania basketball team and graduated in 2013 with a degree in film studies. The rising filmmaker also graduated from the American Film Institute Conservatory in 2016, according to E! News. Though Malcolm was noticeably absent during the family's onstage celebration for Washington at last year's Golden Globes, the AFI tweeted he was too busy "working on his AFI thesis film."

While her older sister is more partial to being behind the scenes, younger sister Olivia is ready for her close up. The 25-year-old has been racking up acting roles since 2013, when she was featured in Lee Daniels' film The Butler. Since then, the NYU alum has been on Empire, Mr. Robot, and the ABC miniseries Madoff. Olivia studied at the Stella Adler Studio of Acting and made her off-Broadway debut in The Glass Menagerie in 2015. Since Olivia has dreams of being a leading lady, Washington told The Hollywood Reporter he offered her a few tips. "You're black, you're a woman, and you're dark-skinned at that. So you have to be a triple/quadruple threat. You gotta learn how to act. You gotta learn how to dance, sing, move onstage ... Look at Viola Davis. That's who you want to be."

Hopefully, Washington brings his brood along to the Oscars on Sunday, Feb. 26 to celebrate another successful year of film for the whole family.

This article was originally published on Feb. 22, 2017