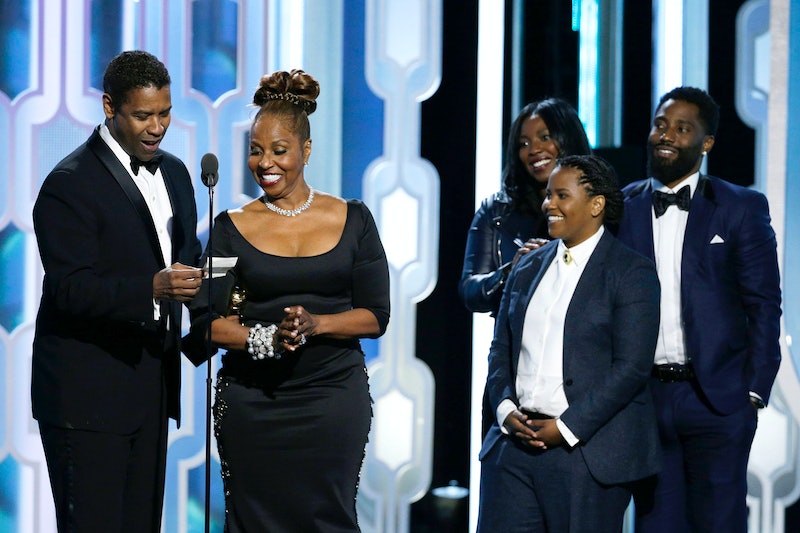 When it was announced that Denzel Washington would receive the Golden Globes' Cecil B. DeMille award, I was expecting a sweet tribute, an emotional montage of the actor's excellent work, and a gracious acceptance speech. What I was not expecting, was to not even process any of that speech, due to being distracted by Denzel Washington's super hot son, John David. When Denzel brought his entire family on stage, it was a really nice moment, as the actor was showing how integral they've been to his career. Unfortunately, that might've backfired, because a pretty significant amount of the Golden Globes audience kind of forgot Denzel was on stage when we got a glimpse of John David standing just behind him.

If you're hoping to see more of John David, I have great news. John is an actor too, and if he follows in his father's footsteps, you'll be watching him for decades. So far, his biggest credit is a role in the HBO series Ballers as Ricky Jerret, unless you count Malcolm X, in which a 9-year-old John briefly appeared. But I think we'll be seeing plenty more of the 31-year-old — after all, this is technically his second career, and I mean, look at him.

Before getting into acting, John was in the NFL, playing for the St. Louis Rams from 2006 to 2007, according to People. And considering the amount of buzz this brief Golden Globes appearance garnered him, I wouldn't be surprised if a filmmaker in the audience offered him a career-making role. Just look at what people were saying after getting a glimpse of the younger, bearded, ex-NFL playing, Morehouse College-educated... I'm sorry, what was I saying?