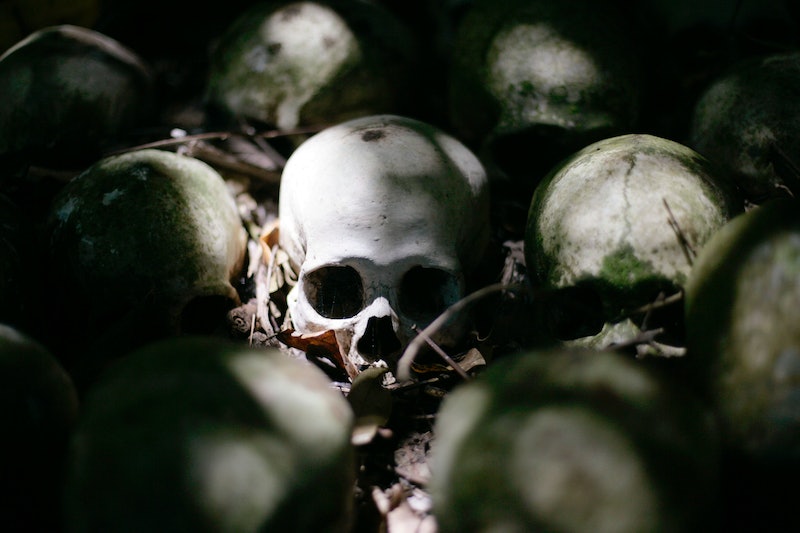 Please tell me I'm not the only person who has heard the superstition that if you die in your dreams, you die IRL, too? I don't know why I'd ever give this concept any credence — especially considering I've literally never heard of this actually happening to anyone — but for some reason, superstition persists. That said, after scouring the internet, I've discovered an abundance of people who apparently lived through a death dream to tell about it. So yeah, maybe you won't actually die (still not totally convinced, but maybe), but that still doesn't explain exactly what dreams about dying mean.

Sigmund Freud referred to dreams as the “royal road to the unconscious” — and while I'm more of a Jungian myself, I can def appreciate Dr. Freud's thoughts on the dreamworld. If dreams really are a road to your unconscious, then what does it say about your mind when you experience your own death within it? Is it an omen? A prophecy? A sign that something's wrong? As a sucker for all metaphysical arts and pseudo-sciences ever, I know there's got to be some heavy dream interpretation around having a dream experience of passing through the great, unknowable, final frontier.

If you're at all familiar with the Tarot, you're probably familiar with arguably its most infamous card: Death. Lots of people are super freaked out by the death card if they don't know its true meaning, but in actuality, it can be a really positive card that signifies life changes, transitions, and new beginnings. All of the same can be said of death dreams, too: While it might be freaky to think about dying in a dream, there are actually many different ways such an experience can be interpreted — none of which indicate that anyone is actually going to die, so set your superstitions and fears aside.

Here are six different interpretations of what it means when you dream about dying so you can stop freaking out about it and start making more sense of your ~inner feelings~ and unconscious mind.

OK, so yeah, the fact that death can symbolize an ending isn't too surprising. "Dreaming of your own death often represents the end of something — perhaps a career, marriage, or other life-altering change," explained Psychic Library. "It can also reflect that something has died within the self ... or be a dream telling you to leave all your cares behind and start something new." New death dream, new you, basically. Has a major chapter in your life just closed, or is it about to? Or perhaps there's something lingering that you should really be cutting ties with? Either way, in this sense, it simply means that transformation and change is afoot, so be prepared.

Just as the death card in Tarot symbolizes rebirth and new beginnings, so can dreams about death. After all, after an ending always comes a fresh start, right? "Dreaming of your own death symbolizes inner changes, transformation, self-discovery and positive development that is happening within you or your life," explained Dream Moods. It's common to dream about death if you're starting a new chapter in your life (just as it is when you're ending a chapter), and it can be a really positive thing, so open yourself up to the flow.

If you're currently overrun with anxiety in your day to day, you won't necessary just have sleepless nights — you may also see it manifest through a dream about dying. "[Death dreams] may mean that you are desperately trying to escape from the demands of your daily life," explained Dream Moods. "This may be some major stressor, obligation, responsibility or perhaps you want out of a painful relationship." This could mean that it's time to take a chill pill and try to eliminate some of the key stressors you're dealing with, if possible, as death dreams can often represent your wish to cut ties with the problems you're facing.

It Could Be A Good Omen

I think everyone's biggest fear when it comes to dreams about dying are that they are some sort of prophecy or bad omen —but actually, many people think they symbolize just the opposite. "Dreaming about your own death means that you don't have to worry about life," wrote Your Chinese Astrology on its site. "[Y]ou will have more and more wealth; you will be in good health and live a long life." See, nothing to fear! If death dreams are bringing any omens, they're going to be good ones, so enjoy the prosperity and longevity.

It's so important to just do you and be your authentic self — and if you ignore that? Well, it may just manifest in some freaky death dreams. "If the [death] dream feels negative, it is possible the dreamer is attempting to repress what the dying object is experiencing," explains Exemplore on its site — and if the dying object is you, well then, it might be time to do some throat chakra meditations and start speaking your truth. Take a look at the situations in your life and consider whether you've really been honest about your feelings about them.

It Could Help With The Acceptance of Death Psychologically

Apparently, many people report the experience of dying in a dream being surprisingly... positive? And there's a lot of evidence to support that dreaming about your own death can help you live a more fulfilled life of acceptance. "Many people tend to live with some anxiety about death," explained Psychic Library. "These dreams may represent a method to cope with that fear, and the reality of it." It's better to live with acceptance rather than constant fear, so this makes sense. Also, Seth Gilligan, Ph.D, at the University of Pennsylvania wrote about his own death dream on Psychology Today, and stated, "I choose to believe that my dream of dying reflected something true about the nature of life, and of death. ... To die was to instantly realize my union with all that I love. What I had imagined as the ultimate separation was in fact the end of separation." Dang, dude. This is some deep AF spiritual stuff, and I'm super here for it. After all, we're all going to die someday, so if dreaming about it can help reduce that all-consuming fear of death in our waking lives, it seems like a good thing.