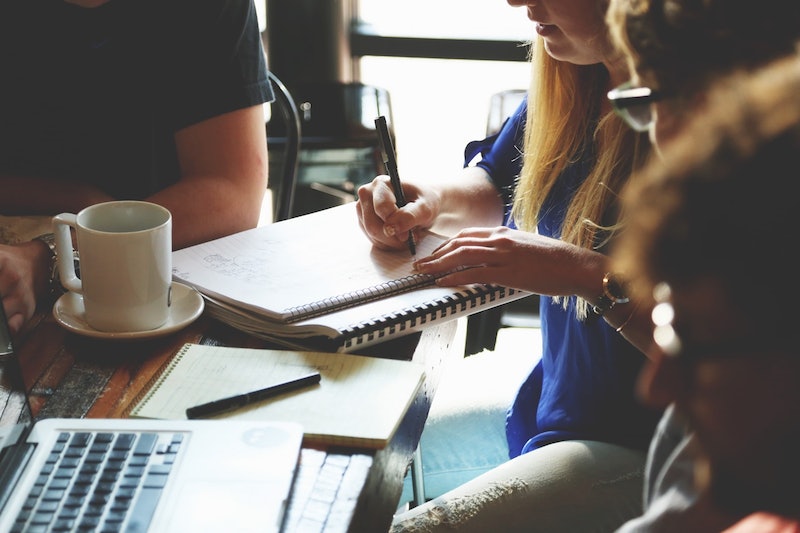 While technology has made many things easier, one thing it has made more difficult — due to the sheer volume of applicants — is getting a job. If you're lucky enough to score an interview, you'll want to be aware of these weird things hiring manager consider red flags. A report from recruiting firm The Execu | Search Group outlines several ways you can lose out on a job, including everything from being an unprofessional online presence to not being a good cultural fit for the company.

I've been on both sides of the table as a hiring manager and an applicant. While sometimes it can seem like landing any job would be a win, it's important to consider things like whether or not your values align with the company, too. Finding the right job is kind of like dating, and a true love match is rare. However, if you take a gig with a company you really don't respect, you're not going to end up being happy in the long run.

Your job interview is basically the first date, and if it's not a love match that's OK. But, if you are over the moon, and you want that job like another Gilmore Girls revival, there are a few red flags to avoid if you want to make a memorable first impression.

With unlimited access to the internet, there's really no reason to go into a job interview unprepared. Research the company before the interview, especially related to the position you're applying for.

"Since a job interview is your chance to make a great first impression and an opportunity to prove that you’re right for the job, you need to do your homework before the interview,” Dan Charney, president and CEO of Direct Recruiters, Inc. told Hunt Scanlon Media. “This includes browsing the company’s website, researching the people you would be interviewing with on LinkedIn and reading their company reviews on Glassdoor. If you’re working with a recruiter, ask questions about the company and why the position is open. Also, try to find out the core values. Many companies post those online now.”

If you go in unprepared, you're wasting your time and the hiring manager's time, and you could end up looking foolish.

If your online life is a mess, that could be a red flag to potential employers. Many years ago, in the days of MySpace, I used to check job applicants' accounts to see what they were posting online. A co-worker admonished me and told me I was invading the applicants' privacy, but I argued that if they were going to publicly represent the company, in this case a newspaper, what they were doing on social media was relevant.

These days your social media accounts is one of the first things hiring managers check, and if it's littered with angry tweets that could give Donald Trump a run for his money, you're not likely to get an interview.

Recruiting company Aerotek advises making sure you're not blurring lines between your personal and professional life on social media; you're not posting anything you wouldn't want everyone to know; you're using privacy settings; you have a LinkedIn account; and you're posting regularly on social media. That's right, not having any social media presence can work against you just as much as having an unprofessional one.

While Scott Patterson said on the Gilmore Guys podcast that he won the role of Luke Danes on Gilmore Girls by acting like he didn't care whether or not he got the job, that tactic likely isn't going to work for most people who aren't applying for the position of surly diner owner. The cliché, "you never get a second chance to make a first impression" is actually true.

When turning up for a job interview, you want to make the best first impression possible. Make sure you're on time, and dress appropriately for the job you're applying for. Stay fully engaged with the person you're speaking with, and don't browse through your phone before, or during, the interview. And, remember that people in the office talk, so make sure you are friendly with every person you encounter from the moment you get there until the second you leave.

"The person at the front desk may not be the hiring manager — but that doesn’t mean his or her impression of you doesn’t matter," Katie Douthwaite Wolf noted on The Muse. "In fact, some companies specifically ask their front desk attendants to report back on the demeanor of interviewees who come through the door. And that likely plays a role in the ultimate hiring decision — so it’s important to treat that person as well as you’ll treat your interviewer."

If the hiring manager asks for your resume as a PDF and you send it as a text document, it tells them a lot about your ability to follow directions. While this might seem like a small error, it makes you look careless. When applying for a job, it's important to read through the posting carefully, and do what the instructions ask if you want to score an interview.

“Following directions is critical,” Stacy Pursell, CEO of executive search firm The Pursell Group, told Hunt Scanlon Media. “Attention to detail is key. You are being tested throughout the interview process. If you can’t handle the small details, how can they expect you to handle the big ones?”

This is a big one, and I actually lost out on a job once for being over confident. I was sure the position was mine, and then I made a fatal error. As I was leaving, I made a point to tell the hiring manager about all of my accolades, basically telling her how great I thought I was. In retrospect it came off as conceited, and unnecessary.

"Hiring isn’t just about skills, after all; that’s a big part of it, of course, but it’s also about how you’ll fit in with the office, manager, and co-workers and what you’ll be like to work with," Alison Green wrote on Ask A Manager.

"If an employer has two candidates who are both well qualified to do the job, and one seems like someone who’s easy to get along with and who they’d enjoy working with and the other seems like she’d be less pleasant to work with, why wouldn’t they pick the first one? In fact, sometimes even if the pleasant candidate is a little bit less qualified, she’ll still get the job, because most managers don’t want to work with someone who seems likely to be a pain in the ass."

During your job interview, you have to walk a fine line between being confident but not cocky, humble, but not insecure. Easy peasy, right? This is more difficult than it sounds. Consider practicing your interview with a friend to make sure you're presenting the best version of yourself. After all, being prepared is the first thing on this list.

When hiring managers meet you, they want to meet you, not a persona you're putting on for their benefit. Live Science reported that a new study in the Journal of Applied Psychology found that "high-quality candidates who strive to present themselves accurately during the interview process significantly increase the likelihood of receiving a job offer."

"People are often encouraged to only present the best aspects of themselves at interview so they appear more attractive to employers, but what we've found is that high-quality candidates — the top 10 percent — fare much better when they present who they really are," co-author of the study, Dr. SunYoung Lee (UCL School of Management), told Live Science. "Unfortunately, the same isn't true for poorer quality candidates who can actually damage their chances of being offered the job by being more authentic."

I think this can be interpreted in myriad ways, and also goes to the importance of being prepared. I once interviewed for a job where I was asked to prepare something in advance of the interview that I had never heard of. After panicking, I called my brother and asked if he had heard of this thing they wanted me to to do. He had, and he pointed me to several free websites where I could learn about it, and successfully create what was being asked of me.

I ended up getting the job, and while I disclosed much, much later that I came in pretty green, I did not tell them this during the interview. Overall, it's important to trust your instincts and imagine what you would want and expect if you were the hiring manager versus the candidate. It's not always going to be a match, but knowing what can get you blacklisted right off the bat is certainly something you can use to your advantage.