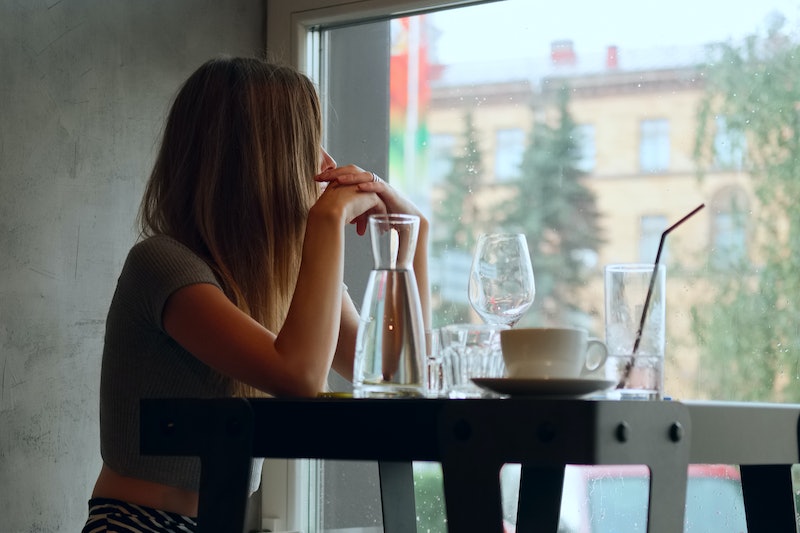 We're all on a never-ending quest for guidance. Whether it's buying self-help books, taking countless online personality tests, or spending all your extra cash on visits to psychic mediums (hey, don't judge!), we all have our methods of choice for trying to make sense of who we are and how we can overcome our challenges. And if you're open to the cosmic guidance of astrology, then you don't want to overlook the astrological meaning of North Nodes and South Nodes in your birth chart, as these points can tell us a ton about our life's path, purpose, and the lessons that we should focus on learning in this lifetime in order to, well, live our best and most fabulous lives.

The North and South Nodes of a birth chart, also known as the "Nodes Of Fate," are actually lunar nodes and can be thought of as helpful astrological pointers that usher us directly toward our most fulfilling spiritual life path. They also tell us what skins we must shed in order to get there. Our South Node represents where we're coming from and what we're bringing into this life. That includes lessons from our past lives, and thus, all the gifts and qualities that you've already mastered. The North Node, on the other hand, represents the path that you are growing into through this life. It's your destiny. And it's not always going to be easy to embrace, but it will most certainly be spiritually fulfilling when you do.

Bustle spoke with astrologer Lisa Stardust, who specializes in the Nodes of Fate and shared some excerpts from her Eclipse Guidebook, which is available exclusively at The Hoodwitch. "The Nodes of Fate are broken down between the North and the South Node," explains Stardust. "Both Nodes feed off each other, meaning, in order to become the person we want to be, we must overcome the past." In this case, the past is represented by the South Node, which brings with it karmic baggage and lessons from your cosmic past. The North Node, conversely, represents the lessons you must learn in this lifetime, despite that they may fall far outside your comfort zone. "While we may bring old junk into this lifetime, we do have the opportunity to overcome our fears — although, it’s easy to slip into past habits," Stardust explains. Overcoming our fears and learning cosmic lessons are goals when it comes to our North and South Nodes.

Each of your Nodes have their own sign in your birth chart, just like planets do, but they're not actual celestial objects like planets and stars. They're simply points — mathematical points — which "take into account the relationship between the Sun, Moon, and Earth at the time of our birth," as phrased by Cafe Astrology. I won't get too deep into the mathematical and astronomical specifics of how it's calculated in your chart, but essentially, as explained by ThoughtCo, "it’s where the lines of the Moon’s monthly path meet the lines of the Sun’s yearly path around the Zodiac." Given that these points are theoretical and don't exist in the physical plane, it makes sense, then, that the concepts they govern are also more spiritual and ethereal in nature.

"Often referred to as the Dragon's Head and Dragon's Tail, the Nodes of Fate and Destiny appear in our charts to show us all our karmic lessons and potential for this lifetime," explains Stardust. "In order to appease both contrasting energies, we need to feed the Dragon’s Head and Tail — appeasing our current lifetime and our past lives." So the North Node and South Node are two sides of the same coin. Whatever sign your North Node falls in will almost always be the exact opposite of the sign of your South Node. While they can be viewed as opposites in many ways, they also work in perfect symbiosis to show you who you are, where you're coming from, and where you should be heading. As stated by Cafe Astrology, "Whether or not we consciously work on these lessons, events in our lives are likely to force us to confront them." In other words, there's no escaping the yin and yang of your Nodes — you must overcome the fears and resistance you have toward one in order to attain the growth you need from the other. Sorry 'bout it — it's just the natural order of the universe.

If you really want the nitty gritty when it comes to the Nodes Of Fate and what they can teach you, consult a professional astrologer. They'll walk you through your chart and give you the whole dish. But you can also easily calculate your North and South Nodes using a free online calculator or by finding your birth date range in an online chart. Easy peasy. Now check out the specific mystical symbolism of the North and South Nodes and how they can help you see the life lessons you need to face in order to grow to into your happiest, most fulfilled self.

"The North Node is your karmic destiny in this lifetime, what we are moving towards based on the lessons from past lives," Stardust shares with Bustle. This Node represents the future and what destiny has in store for you, based on the lessons you've learned in the past — so naturally, the qualities associated with your North Node's sign will almost always evoke in you some fear of the unknown! It's believed by many astrologers that people really begin confronting North Node issues in their thirties — so if those years are still ahead of you, prepare to dive into the mysterious unknown if you want to really seize the opportunities that the universe is offering you in this lifetime. "We very much want what is represented by the South Node position, whether that is order in our lives ... or satisfaction in partnerships," explained Cafe Astrology on its site. "However, the only way we can feel successful in these areas is through working on the qualities of the opposite sign." If we want to work through unfinished business from our past lives and ~evolve~ into our highest, happiest selves, we must embrace the North Node qualities, uncomfortable as they may feel. Think of it like learning a new language that you're meant to learn — it may feel awkward and be difficult at first, but once you're fluent, it'll open up a whole new world of possibilities for you.

Remember, growing and marching forth into an unknown future is scary, and when we're fearful, we tend to cling to the familiar habits that feel "safe" — meaning that it's easy to fall back on the qualities you've already mastered in your South Node. "Look to the North Node by sign and house as an area of our lives and personalities that we may neglect or avoid, possibly due to fear and resistance," explained Cafe Astrology. Fear is normal, but life, in many ways, is synonymous with growth. And in the case of astrology, we must strive to embrace our North Node qualities to live our lives most successfully, happily, and harmoniously. Let's live our best lives, y'all.

The South Node will almost always be in the sign directly opposite of the North Node on the zodiac wheel — thus, it serves as the flip side of the coin in many ways. So carrying on with the language analogy, if the North Node is the new language you're learning in this life, think of the South Node as your mother tongue. It's always going to be easiest to fall back on, but in order to grow and reach your potential, you must power through and expand! "The South Node acts as a reminder of the past, what we have overcome in our former lives," says Stardust. The qualities associated with whatever your South Node sign is, then, are essentially skills that you've already gained. Use them, yes, but don't get stuck there. "The South Node can be considered your inheritance ... from past lives," explained AstroStyle on its site. "The key is to use your South Node as a springboard into your North Node destiny."

The comfort and familiarity of your South Node makes it easy to fall back on the qualities it represents in your sign — but doing that too much can manifest as being avoidant of embracing the true destiny of your North Node, which is no good! "It’s like a distant echo that reverberates into this life, and has an irresistible pull," explained AstroStyle of the South Node. "It’s easy, but not very fulfilling to replay that drama, since the groove is there and it comes naturally." Use what you've got to move forward, not stay in one place. Human beings weren't put on this Earth to invent astrology and then ignore it, after all! So instead of running from the unknown, use your South Node gifts to propel yourself toward it — then reap the cosmic and karmic rewards your destiny has in store for you.

More like this
The Best Self-Care Strategy For Your Zodiac Sign
By Marilyn La Jeunesse
Emily Ratajkowski & Pete Davidson's Astrological Compatibility, Revealed
By Nina Kahn
Are Sagittarius & Sagittarius A Good Match? Astrologers Weigh In
By Kristine Fellizar
Are Sagittarius & Capricorn Compatible In A Relationship? Astrologers Weigh In
By Kristine Fellizar
Get Even More From Bustle — Sign Up For The Newsletter