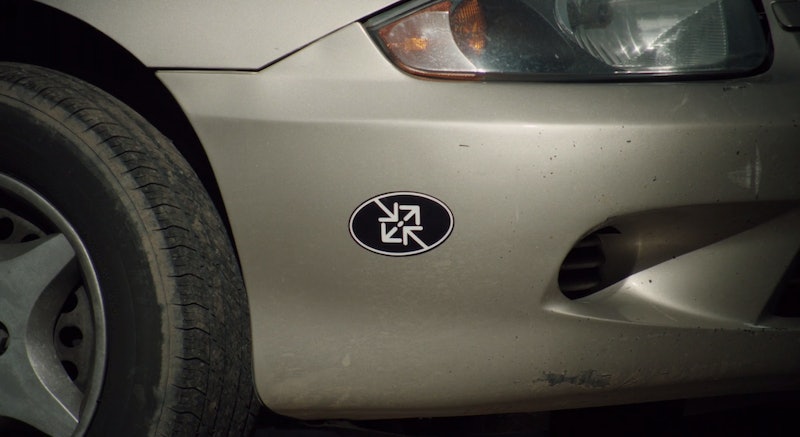 Mosaic (series casting: Carmen Cuba) covers the murder of Olivia Lake (Sharon Stone) from multiple angles, and follows the many unique stories that are spawned from it. But that's not the only mystery going on in Summit, Utah. During the course of Petra Neill's (Jennifer Ferrin) investigation, a mysterious symbol begins to appear. The meaning of the arrows on Mosaic is never fully revealed in the HBO miniseries. But they are explained if you watch the series in its original format.

Mild spoilers for the series. The symbol — a dot with two arrows pointing inward and two other arrows pointing out — is seen a few times in Mosaic (set decoration: Barbara Munch). It's most visible when Petra sees it as a bumper sticker on a car during her investigation, and again when a student journalist reveals a secret about Petra's family to her in search of a story. It seems that whatever this symbol represents, it seems to be following her.

While the show never provides a concrete answer for what the symbol represents, the Mosaic app does. The app is free to download and use and features all of the footage from the Mosaic show, re-edited to resemble a "Choose Your Own Adventure"-type story. Most of the material from the app made it into the show as it appears on HBO, but there's one crucial segment that was left out. It's a segment that solves the mystery of Olivia's murder and the origin of the mysterious arrows. It turns out those arrows aren't appearing randomly — they're proof that those who display it are members of a cult called The Church of Eventualism.

MAJOR SPOILERS FOR MOSAIC. All of the characters followed in the Mosaic app, including Olivia, Joel, Eric, Petra, and Nate, have their stories almost fully re-produced for the Mosaic show. But there's one chapter at the end of the Mosaic that has been cut out of the show in its HBO airing. That chapter follows Michael O'Connor (James Ransone) as he visits and kills Olivia after a dispute over his attempt to buy her land from her. He escapes to the Turks and Caicos Islands under the guise of a vacation, and is then recruited by a worker named Lando who converts Michael to The Church of Eventualism.

He eventually returns to Summit, Utah once Eric Neill (Frederick Weller) is wrongfully arrested for the murder, and successfully buys Olivia's land. Once the investigation into Olivia Lake starts back up, the church appears to be actively trying to throw Petra off and keep her from discovering the truth. The church has an especially vested interest as — revealed by a "discovery," a.k.a. some supplemental case material available in the Mosaic app — Michael has invested $4.44 million of his own money into this fictional cult. It seems like Michael's invitation to the church could be random happenstance, but information revealed in the app shows that The Church of Eventualism was interested in Michael for a very specific reason: Beryllium.

Beryllium is a valuable mineral that has been used in "the space program," Petra explains. The Mosaic app reveals that "around 11 percent of total world beryllium reserves [are] under O'Connor family control," and that Olivia's property was sitting on a great deal of the mineral. Michael initially tried to purchase the property for financial gain, but it appears that the Church of Eventualism is interested in the beryllium for other reasons.

In a document hidden within the Mosaic app, a fictional government organization called the The National Commission into Cults and Parareligious Organizations states that they believe Lando is trying to convert Michael for access to beryllium due to its use in building military equipment, including nuclear weapons. The full 15-page document also goes into the history of the cult, the cult's roots in Eastern Europe, and the churches' belief the element beryllium is directly related to an impending apocalypse.

As if the inclusion of a cult plotline that is barely mentioned in the HBO version of the show isn't odd enough, Mosaic doesn't even mark the first time that Eventualism has appeared in fiction. Mosaic director Steven Soderbergh first mentioned The Church of Eventualism in his experimental 1996 film Schizopolis (editor: Sarah Flack). Over two decades later, Soderbergh has revived this fictional religion for Mosaic.

A lot of work went into bringing this mysterious cult back to life, only for it to be entirely cut out of the aired version of the show, minus the mysterious symbols. But perhaps it was always meant to exist as an app-only Easter egg. As it stands, The Church of Eventualism exists only as a treat for those who experience Mosaic through the app, providing them all the answers they could ever want about why people wanted to keep the Olivia Lake murder unsolved.