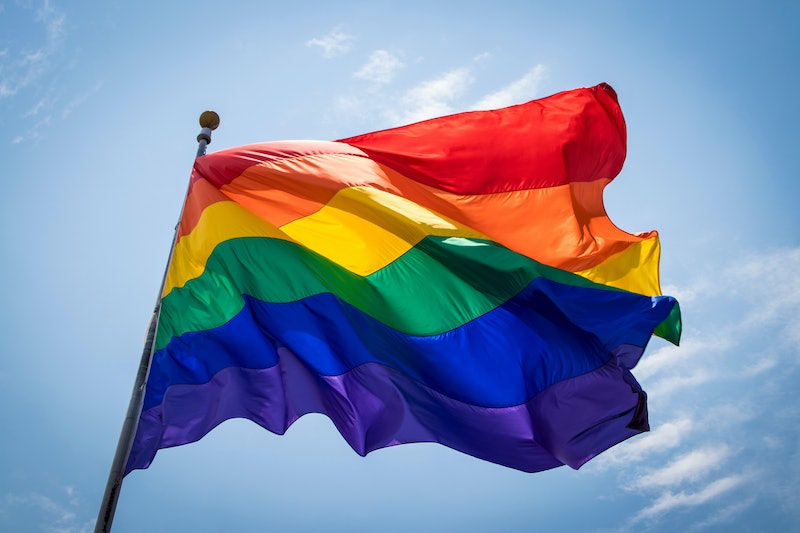 You've seen it on buildings, bumper stickers, and front lawns, and you've waved one at parades, rallies, and protests. You know the Pride flag well, but what is the meaning of the rainbow flag? Its history is as interesting as it is colorful.

From peace movements to political parties, the rainbow flag has been the symbol of dozens of historical and cultural organizations. In 1978, though, a gay artist and civil rights activist Gilbert Baker, alongside the Grove Street gay community in San Francisco, made the first rainbow pride flag as a response to an anti-gay community that began using the pink triangle the Nazis used to identify gay individuals.

Originally hand-stitched and hand-dyed with eight colors — pink, red, orange, yellow, green, turquoise, blue, and purple — the rainbow flag became much more than a simple reaction to homophobic behavior. Instead, it became a universal symbol for LGBT pride and began hanging from windows, flying high at demonstrations, and cropping up all over the country. As the popularity of the flag grew, its design was adapted to meet demand, and by 1979, the six-color version became the official symbol for gay pride.

Since June is officially Pride month, it's time to fly your own flag high, but before you do, find out what the colors of the rainbow flag mean below.

Healing: Bright and bold, the second stripe in the rainbow stands for healing, a symbol especially important in light of recent events.

Sunlight: A message about being yourself instead of hiding in the shadows, the yellow stripe on the rainbow flag is meant to represent sunlight.

Nature: As it does in many other instances, green represents nature in the rainbow flag.

Serenity: When the flag changed from eight colors to six colors, the original turquoise and indigo stripes were replaced with blue, the cool and calm color that stands for serenity.

Spirit: Saving the best for last, purple, which falls at the bottom of the flag, stands for spirit. Even when the flag had eight stripes, lilac was the last color of the rainbow.

More like this
Jujubee’s Humble Reminder
By Sam Ramsden
Megan Barton-Hanson On Bi-Visibility & The Need For LGBTQ+ Love Island
By Sam Ramsden
How To Come Out Online, According To Trevi Moran
By Melanie Mignucci
Travis Alabanza On Not Fitting In
By Sam Ramsden
Get Even More From Bustle — Sign Up For The Newsletter