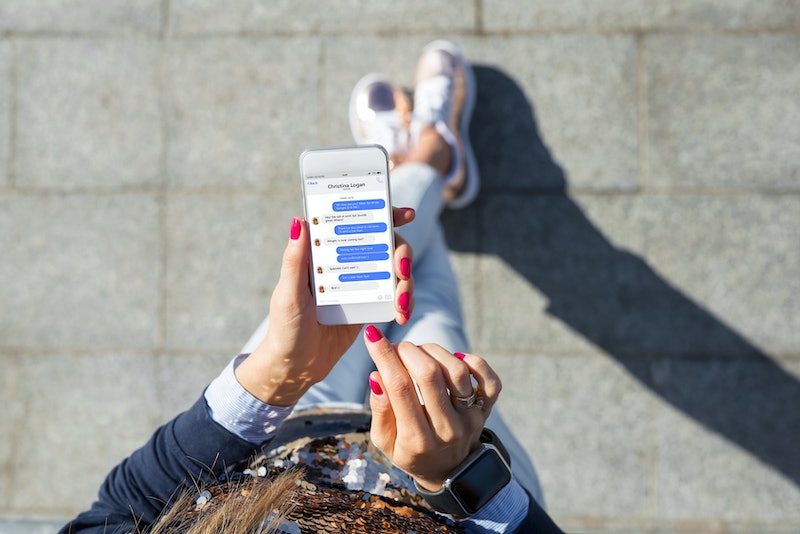 If you're an iPhone user, you're probably familiar with the following situation: You join a group chat and — dun, dun, dun — your texts show up green. This just means that someone in the chat doesn't have an iPhone and can't see your emoji as you intend them to look, right? Well, kind of. Green text bubbles on an iPhone can mean that you're texting with someone who doesn't also have an iPhone, but they also mean that the texts are not encrypted through iMessage.

When you send texts — blue texts — through iMessage to someone else with iMessage, the messages are end-to-end encrypted. As explained by Wired, "End-to-end encryption is a system of communication where the only people who can read the messages are the people communicating. No eavesdropper can access the cryptographic keys needed to decrypt the conversation — not even a company that runs the messaging service." This is to say, when the message is passing from the sender to the receiver, it's just a bunch of gibberish.

Apple notes in the privacy section of its website that it uses end-to-end encryption on iMessage and FaceTime conversations across all devices. "We designed iMessage and FaceTime so that there’s no way for us to decrypt your data when it’s in transit between devices," the Apple site explains.

That said, iMessage isn't the only way around this if you want to protect your messages. WhatsApp uses end-to-end encryption by default and is available for iPhone and Android. There's also Signal, for both iPhone and Android, which also has other privacy features, including blocking people from taking screenshots and setting time limits on texts before they disappear, as reported by CNBC. And there are other apps out there, too, so it's really just about choosing the one that best suits you. Either way, keep in mind that both people texting have to be using the same app for it to work. Just as an iMessage sent to an Android owner using SMS won't be end-to-end encrypted, any messages sent from one app to another won't be end-to-end encrypted.

On March 14, Apple released an ad focused on privacy measures that are available on the iPhone. The company captioned the video on YouTube, "Your privacy matters. From encrypting your iMessage conversations, or not keeping a history of your routes in Maps, to limiting tracking across sites with Safari. iPhone is designed to protect your information." More information about Apple and privacy can be found here.

Now you know what those green and blue chat bubbles really mean. And if you are worried about your messages being kept private, you can think twice about sending unencrypted messages. But, if you're just sending green messages to talk to your friends about what's happening on The Bachelor, you're probably fine.