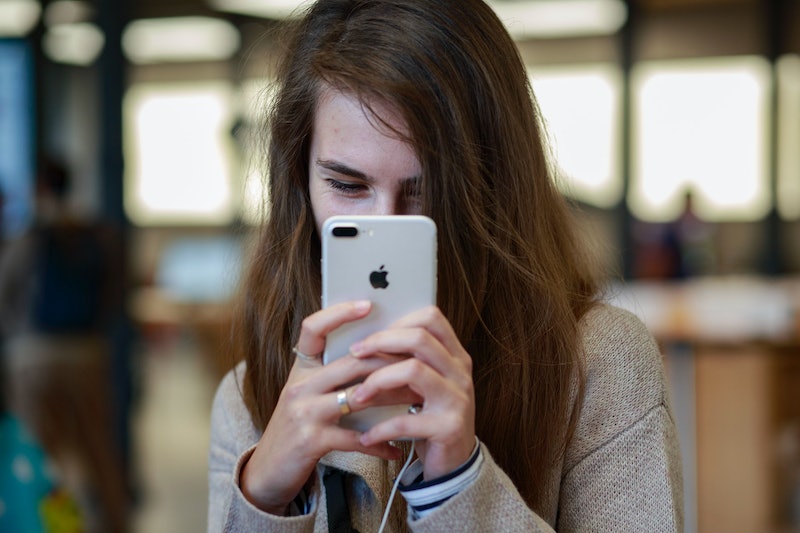 By now, let's assume you know and love iOS 10 (unless it bricked your phone — in that case, my condolences). But if you're still on the fence about downloading the update, the sheer variety of iMessage tricks available in iOS 10 is all but guaranteed to change your mind. The update may not have been as life-changing as, say, the advent of Snapchat lenses last year, but it makes some major changes to your phone. Apple Maps remembers where you parked your car, for one thing, and it allows you to search the photos you've saved to your phone, saving you hours of endless scrolling for that cat photo you took in 2013.

Out of all the features of the update, however, the iMessages facelift is the most obvious. You've probably already heard about some of the more noticeable updates, especially the addition of Digital Touch. If not, here's a brief rundown: Digital Touch is that new icon (two fingers outlined in a heart) that lets you send sketches, draw on photos, and fling virtual fireballs at your friends — or kisses, if that's more your style. On top of Digital Touch, iOS 10 adds things like tapbacks and Bubble Effects.

So what are you supposed to do with all these new capabilities? Here are a few ideas to get you started.

1. Break Out The GIFs

If you tend to communicate in GIFs more often than not, the days of hunting down that perfect image in Google are over. If you tap on the icon shaped like an "A," pictured above, you can search images and videos through your text keyboard — super useful for the GIF connoisseurs out there.

You can live out the half-animated world of Who Framed Roger Rabbit by interacting with doodles you draw directly onto Digital Touch videos. The coolest part? You're not restricting to drawing on a clip you've already recorded; you can also draw on videos as they're recording. For a tutorial explaining how to draw on photos and videos in iOS 10, head over here.

On a sappier note, use the handwriting function to send personal messages like the heart, beautifully drawn by yours truly, pictured above. To access the handwriting keyboard, just tilt your phone horizontally after you've opened a text, and it should automatically appear. To switch between handwriting and regular keyboards, just tap on the corresponding button in the far right corner.

4. Check Out Tons Of New Emojis

There are tons of new, more diverse emoji options in iOS 10 to pepper your conversations. Get to work using all those professional lady emojis you couldn't access before.

As you may have noticed, screen effects are pretty much the best thing ever, and birthday balloons don't even require any effort. When you send a text reading "happy birthday," it automatically sends a bunch of virtual balloons as well.

Invisible Ink has a fairly obvious function, but its stealthy nature is also perfect for trolling people. My suggestion? Send an Invisible Ink to someone that, when swiped, reveals John Cena. To send an Invisible Ink message, press and hold on the "send" button until the Bubble Effects menu pops up, then select "Invisible Ink." Once that's done, send away!

With iOS 10, texting has become a lazy woman's dream. (Trust me, I would know.) The possibilities are endless: Use tapbacks to acknowledge a text without going through all the effort of typing "k." Let Siri figure out which emojis to send. Send your SO a kiss when you miss them. Draw an arrow pointing out the photobomb in the background of your last selfie rather than explaining it in words.

I could keep going, but that would ruin my lazy credibility. I'll leave the rest of the iOS 10 iMessage shortcuts in your capable thumbs.