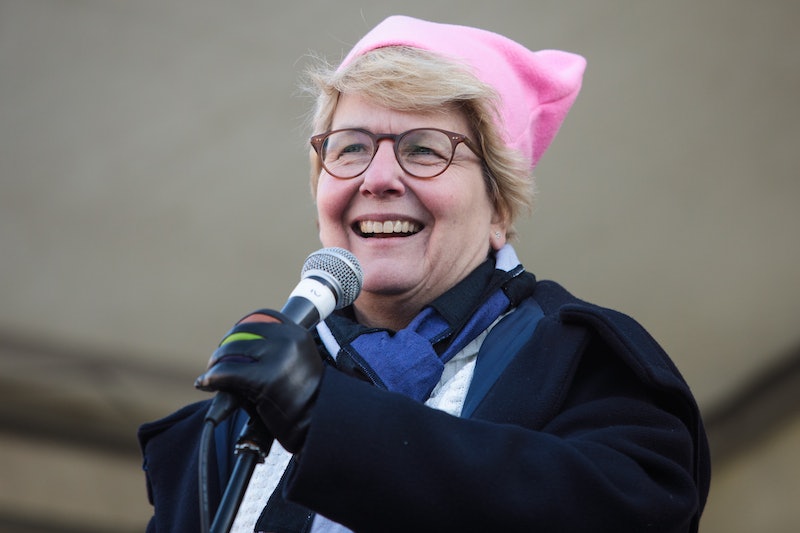 With hundreds of thousands of women gathering in solidarity Saturday, there was one notable accessory tying many of them together. Dotting the sea of women and men who were standing up for women's rights and against Donald Trump, the pink hats at the Women's March on Washington had a meaningful message.

The Pussyhat Project was launched Thanksgiving weekend to knit thousands of pink hats for those who would march in Washington, D.C. for the Women's March. The mission behind the project was to provide a "unique collective visual statement which will help activists be better heard" and also to provide "people who cannot physically be on the National Mall a way to represent themselves and support women’s rights."

And, yes, the hats mean exactly what you think they do. While the creators of the Pussyhat Project encouraged knitters to knit whatever kind of pink hat they wanted, there was a special emphasis on the hats with the pussycat ears (beyond just enjoying the wordplay of "pussycat" and "pussyhat"). "We chose this loaded word for our project because we want to reclaim the term as a means of empowerment," the Pussyhat Project's website states. It continues:

Of course, the attempt to reclaim the word "pussy" as a term of empowerment was especially meaningful, considering the man who was inaugurated as president of the United States the day before the march was once recorded saying that when you're a celebrity, you can do "anything" you want to women — like "grab her by the pussy." Many women fought against that offensive assertion not only by proudly wearing their pussyhats, but also with signs asserting that in 2017, "Pussy Grabs Back."

The Pussyhat Project provided a knitting pattern for anyone who was interested in knitting their own hat or in knitting hats to send to marchers in D.C. For those who couldn't attend the march, the idea was that they could still participate by sending hats to marchers; knitters (or crocheters!) also had the option to send personal notes to whoever might receive the hat.

And the hats made the splash the creators intended to make at the march. Pussyhats appeared in most of the photos taken at the march, sending the message of unification — and of strong women — to people around the world.