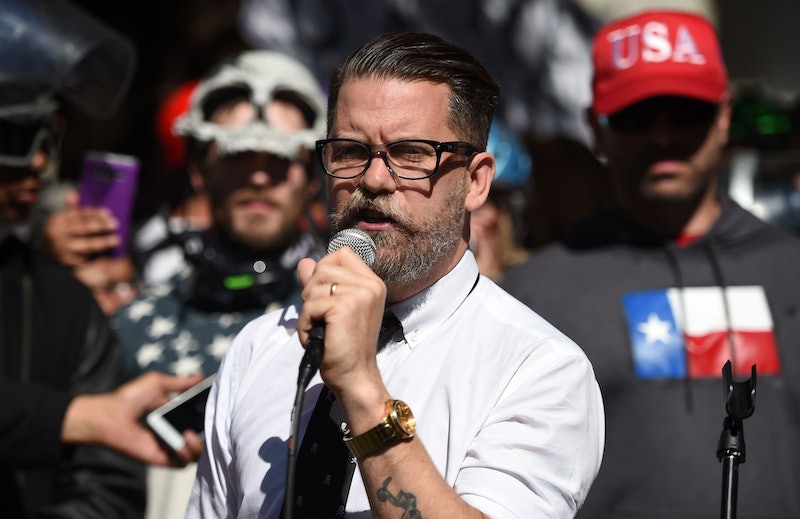 In the fall of 2016, Vice Media co-founder Gavin McInnes announced that he had created a "Western Chauvinist" group called The Proud Boys. In an article for the conservative Taki's Magazine, McInnis described his group's central beliefs — no women are allowed to join, for example — and its growing popularity, saying at the time that the private Facebook page had over 1,000 members.

"Like Archie Bunker, they long for the days when 'girls were girls and men were men,'" McInnes wrote, referencing the grouchy conservative father in the television show All in the Family. "This wasn't controversial even twenty years ago, but being proud of Western culture today is like being a crippled, black, lesbian communist in 1953." (Distasteful and historically inaccurate analogy aside, it's worth noting that Archie Bunker was played by Carroll O'Connor, a deeply liberal actor, and the character was always meant to be a parody.)

But this nostalgia for an imagined past is probably the least peculiar aspect of The Proud Boys' policies and practices. Their initiation rituals are reminiscent of those from the movie Fight Club — a favorite film among those young men who feel the modern "crisis in masculinity" and fail to see that the film satirizes such feelings.

To become a member, men must publicly declare their loyalty, get a tattoo, get into a physical altercation with a liberal protester, and be able to name five breakfast cereals in succession after taking a beating. (For those who fail to name cereals quickly enough, said beatings continue until the task is completed.)

While their practices may be strange and misguided, their policies are no laughing matter. According to a public Facebook page for The Proud Boys, they are strong supporters of President Donald Trump, guns, and "Western values," among other things.

The group also lists those groups they are against: undocumented immigrants, feminists, Muslims, and Nazis.

This disavowal of Nazism is interesting and perhaps disingenuous since, according to a report by the Southern Poverty Law Center, some Proud Boys allegedly harbor neo-Nazi sentiments. One member, for example, once posted a picture of his new reading: Adolf Hitler's Mein Kampf. (The post has since been deleted.)

Recently, a Canadian chapter of The Proud Boys made the news after they got into a dispute with indigenous people in Halifax, Nova Scotia. Several times they interrupted a female indigenous chieftain as she performed a ritual by the statue of the city's founder, who promoted the indiscriminate killing of the Mi'kmaq tribe.

"WTF!?" McInnnes tweeted in response to a news article about the dispute. "We weren't there to criticize NDNs. We were there to defend Halifax's founder." (NDNs is a shortened term used by some indigenous people in America and Canada.)

When asked by a Canadian broadcaster if Proud Boys pose a public threat, The Hill's Will Sommer, who has covered the group, said that as their numbers are growing, Proud Boys may become a problem in the future.

I would say keeping an eye on it is definitely worthwhile. When I first discovered them maybe six months ago, people were thinking, you know, this has to be fake or whatever. But there are all these YouTube videos. It's clearly real, and it is, indeed, growing.