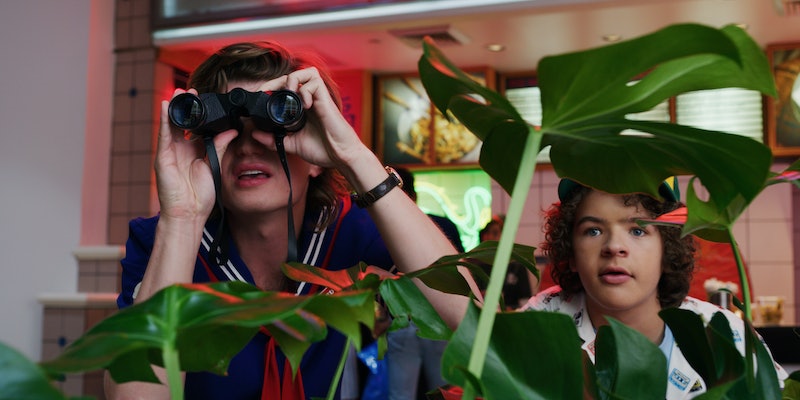 Spoilers ahead for Stranger Things 3. The first thing you see in Stranger Things 3 isn't Mike, Eleven, and the gang, but a group of Russians conducting their own experiments with the Upside Down. It's unclear why the Russians are trying to reopen the Upside Down, but ultimately, it doesn't matter: regardless of their motivations, it's up to Eleven and the D&D crew to stop them from undoing all their work last season and save the world once again.

While Russia may be a far cry from Hawkins, Indiana, it's fitting that a show which pays homage to the '80s features Russians as the Season 3 villains. Because though America's Cold War with the Soviet Union was finally coming to an end at the time, many '80s movies (like Rambo: First Blood Part II and Red Dawn) made Russians the villain, too.

The Space Race between the U.S. and the U.S.S.R. had finished by the '80s, but that doesn't mean Russia stopped wanting superiority in the field of science and technology. In Stranger Things, this means opening the Upside Down, because even though it's highly dangerous, it's still pushing the boundaries of what humanity thought was possible — and being part of that could bring glory to the Soviet Union. Or perhaps the Russians have even more menacing motives and want to unleash the creatures of the Upside Down on their enemy nations, like the U.S.

Stranger Things never really explains why the Russians are doing what they're doing. That in itself is pretty perfect for the "evil Russian" trope of '80s film since culturally, Americans were pretty willing to accept Russians as the bad guy no matter what the reasoning. But one way that Stranger Things helps to deconstruct that narrative is through the Slurpee-loving Alexei (Alec Utgoff). The Soviet Union scientist sees that his superiors don't care about what dangers their experiment could unleash. So he eventually tells Joyce and Hopper — via translator Murray Bauman — how they can disarm the magnetic machine the Russians are using to reopen the Upside Down's gate.

Sadly, Alexei is killed by Andrey Ivchenko's henchperson Grigori. But the information he provides Hopper, Joyce, and Murray is essential to their success in stopping the Russians, if temporarily. As the end credits scene reveals, the Russians may not be gone just yet... in fact, they may be holding a still-alive Hopper captive. At a base in Kamchatka, Soviet soldiers pass over an "American" prisoner to feed a Russian one to a Demogorgon. That means the Mind Flayer still has stake in this side of the universe, and also that Hopper may have survived the explosion at the underground Russian lab if he's the "American" the guards were talking about.