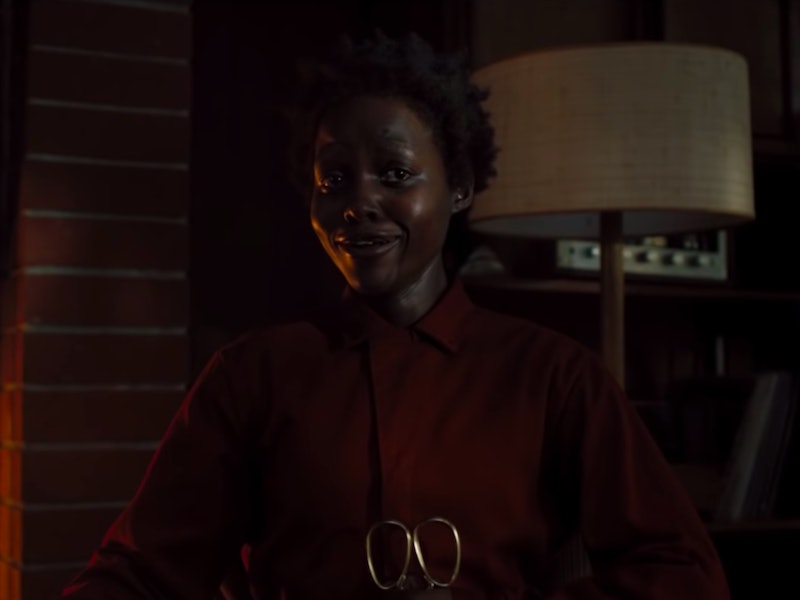 Horror movies have long utilized highly-specific items in symbolic ways, ensuring that moviegoers will never see another chainsaw or red balloon or white mask without a foreboding feeling of terror. Per Jordan Peele's new offering, Us, it's a pair of golden scissors that are creeping out the internet, and have been since December when the movie poster had a pair of shears front and center, and influencers and celebrities started receiving their own in the mail. (The shared sentiment? Creepy! Happy holidays!) Then the Us trailer dropped, showing golden scissors in the hands of what appear to be murderous doppelgängers of the Wilson family at the center of the film. What do the scissors mean in Us, then? The visual is front and center in all the movie's marketing.

"I think rabbits and scissors, they're both scary things to me, and both inane things," Peele told Entertainment Weekly. "So I love subverting and bringing out the scariness in things you wouldn't necessarily associate with that."

Scissors are essentially household items (much like tea and spoons from Peele's debut feature, Get Out), but they can also be used as weapons, as they are in Us. But why scissors as opposed to knives or other sharp objects?

"My favorite thing about horror movies is that everyday objects are used as weapons. I just think that's a great aesthetic," Peele told AllHipHopNews at the film's SXSW premiere, where he donned a custom pin of bloody scissors on his lapel. "The scissors have many sorts of thematic levels as I try [to do] with everything. But they are an object of great duality. This movie is about the duality of humankind."

Peele also told Variety that people "should already be scared of scissors," which is true. As children, we're taught about being cautious when using them, not to run with them, how to hold them properly when cutting or walking as to not have a horrific accident with their sharpened blades. In Us, scissors are wielded by The Tethered (a.k.a. the doppelgängers), used to slash into the throats of their counterparts. Because of this "tethered" idea — that each individual has another version of themselves — one theory, as put forth by Forbes, is that the scissors "may be related to the Tethered's desire to cleave that tethering and become independent forces, loose on the world." Essentially, that would mean the Tethered would be cutting the Wilson family loose by killing them and replacing them as the only version of themselves. The broader idea (and perhaps the ultimate meaning) of Us seems to be that Americans typically view outsiders as threats; invaders who are trying to take over. As Trump's proposed wall is both a literal attempt and a symbol for keeping people in or out, Peele could be using the scissors as a symbol for cutting them off — or cutting off a part of ourselves.

“On the broader strokes of things, this movie is about this country,” Peele said at SXSW, as reported by The Root. “And when I decided to write this movie, I was stricken with the fact that we are in a time where we fear the other, whether it is the mysterious invader that we think is going to come and kill us, take our jobs, or the faction that we don’t live near that voted a different way than us. We’re all about pointing the finger. And I wanted to suggest that maybe the monster we really need to look at has our face, maybe the evil is us.”

The scissors also partly inspired the use of rabbits, which also figure into the trailer. Speaking with The Guardian, Peele pointed out their "scissor-like ears."

"They’re an animal of duality," he added. "They’re adorable but they terrify me at the same time."

Some who have already seen Us have joked they're never going to use scissors ever again, but what's more likely to happen is that scissors become synonymous with the ideas presented in Us; the assertion that we should sever ourselves from the worst of what's in us — and that requires the sharpest of tools. Got a pair of scissors lying around?