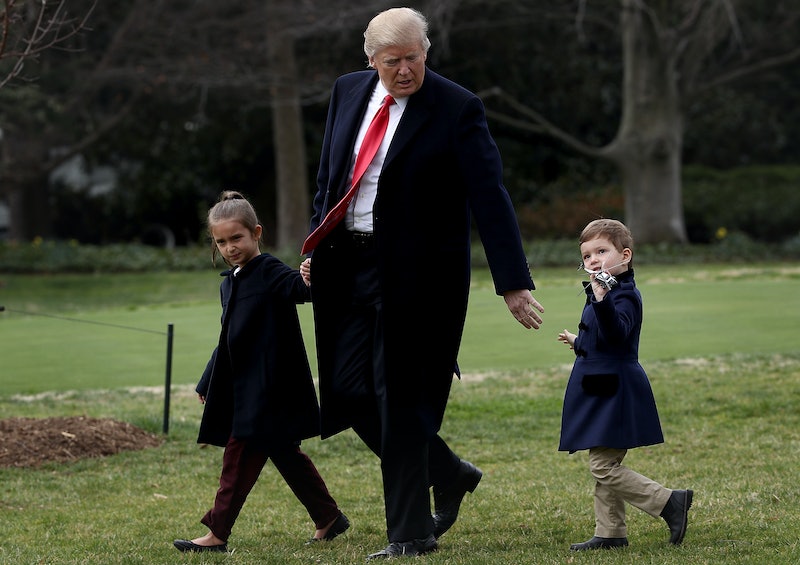 At the moment, Donald Trump holds a litany of titles. He is, of course, president of the United States and commander in chief, as well as a reality TV star, real estate mogul, husband, and dad. And in 2017, Trump welcomed his ninth grandchild — but don't assume that solidified his title as grandpa. So, what do Trump's grandchildren call him? The president has said he's not a fan of the title "grandfather."

"It's a hard word to get used to, I have to tell you," Trump once said of the world grandfather during an appearance on ABC's The View. "It's hard. I have them call me Donald. Isn't it sad when you have your grandchildren call you Donald?"

While Trump may have been joking about having his grandkids refer to him by his first name, it wasn't the first time he'd appeared to reject the whole grandpa/grandfather title. In fact, when Trump's first grandchild was born in 2007, Trump told People magazine that he wanted his newborn granddaughter to call him "anything but grandpa!"

"I'm not sure it will ever sink in," Trump said about having become a grandfather.

Indeed, more than five years later, Trump appeared to suggest that he was still a little bothered by the fact that he was a grandfather to, at that time, four going on five kids during an interview with Fox & Friends. "I guess I'm getting a little bit older but it's a wonderful thing," Trump said when congratulated on news of Ivanka Trump's pregnancy.

"The psychology of a grandfather tends to bother me a little bit because it tends to represents lots of good things but one not-so-good thing," Trump went on to say. "But that's OK. We're very happy about it."

But perhaps Trump's grandchildren really do, despite his wish, call him grandpa. In 2015, Trump's eldest daughter Ivanka Trump told Barbara Walters in an interview for ABC News that her daughter Arabella referred to Trump as "grandpa."

"A few months ago we're walking down the street and my daughter sees a large pothole in the middle of a New York City street and she looks at me and she goes, 'Mom, Grandpa would not like that!'" Ivanka said. "That was very cute. She's four so she's observed him."

Ivanka has also said Trump is "amazing" with his grandkids. "He's really, really amazing with the kids," she said in an interview with Yahoo! Parenting in 2016. "They see him most weekends during the summer. We're together in New Jersey with one of our golf clubs. They spend a lot of time rolling around with him on golf carts. They adore him."

A few years before, however, Ivanka appeared to suggest that Trump wasn't exactly the greatest babysitter in an interview with Redbook. "He takes her all the time," Ivanka said of Trump and her daughter Arabella. "But with me. He wouldn't know what to do if she was crying or needed a diaper change. Although I think he'd figure it out."

Trump became a grandfather for the ninth time when Eric "Luke" Trump was born to Eric and Lara Trump in September 2017. The president's eldest son, Donald Trump Jr., has five children, while Ivanka has three with husband Jared Kushner.