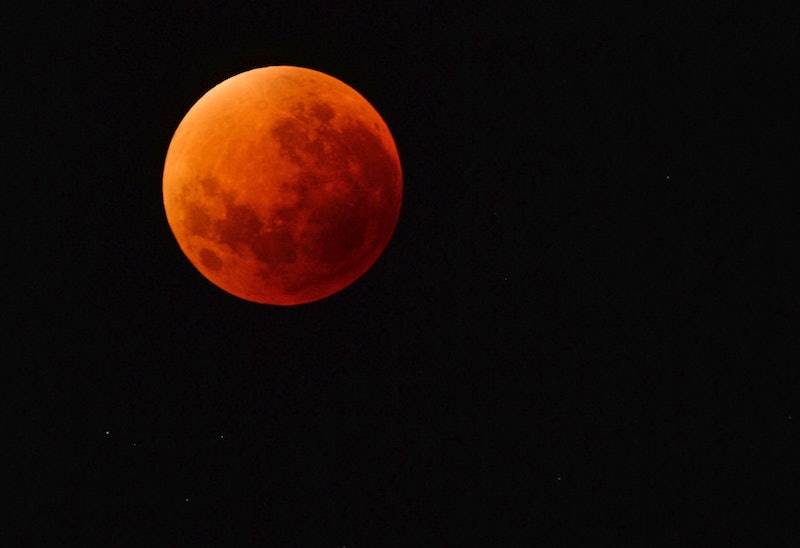 When I hear the phrase "blue moon," there are two things that came to mind. One, it's describing something very rare, and two (honestly, this is usually my more immediate association), the prom scene from Grease when the gang slow dances to the big band song named for this lunar event. However, a blue moon is, in fact, an actual astronomical phenomenon — and it's happening in January 2018. As if one cool lunar happenstance wasn't enough after Jan. 1's super full wolf moon, we actually have more cool moon things on the horizon (pun intended) during the first few weeks of the year. In addition to being a blue moon, Jan. 31's full moon will also be a supermoon and a blood moon (meaning the full moon will occur during a total lunar eclipse). I know, I know — for all us astrologically-minded people, that is a lot so swallow. So, you might be wondering as the second full moon of Jan. 2018 approaches, what does the super blue blood moon mean for your sign? With all that astronomical movement, it's gotta mean something, right?

Well, in short: Astronomy buffs, you've been waiting for this. It's the Superbowl of the stars.

Let's unpack what all of these astronomical terms mean... because there are a lot of them. According to Space.com, a blue moon is what happens when two full moons fall within the same calendar month. It happens so rarely — approximately once every two and a half years — that we've adopted the phrase "once in a blue moon" as a shorthand for "basically never." The first full moon of 2018 rose on Jan. 1, and the second will rise on Jan. 31 — hence, January's it's blue moon.

During a supermoon, the moon's closest approach to Earth during a single orbit (aka perigee, in scientific terms) coincides with the full moon, making said full moon appear bigger and brighter than usual. A lunar eclipse is the movement of the moon into the Earth's shadow. The blood moon is a full moon that appears reddish, because the Earth is blocking out sunlight as it lines up perfectly with the Earth — thanks to the lunar eclipse. All this is according to Space.com, who I now have to thank for what probably would have constituted years of astronomy classes. To make things easier, we'll call this perfect astronomical storm a super blue blood moon. Say that ten times fast.

All of these events happening in such quick succession means that it's going to be a "super punch of drama and emotion" for everyone, according to NYC-based astrologer Lisa Stardust speaking with Bustle. Eclipses and supermoons tend to bring even the shadiest of deeds to light, and full moons are typically known for inciting lots of feels and encouraging people to let go of things and start fresh. No matter what your sign, Stardust encourages you to "commit only to what you love" during this time. Other projects, endeavors, and relationships are likely to fail and fall through the cracks as the skies are in a state of flux.

"This blue moon eclipse will give every sign a run for the money, especially the fixed signs: Taurus, Leo, Scorpio, and Aquarius," Stardust says. "This eclipse will be felt very deeply by us earthlings because the moon is very close to the Earth during the supermoon eclipse."

While everyone can expect to be affected by these events, each sign will experience them a bit differently. Here's what you need to know based on where you fall on the zodiac.

Working on a passion project or on something creative at work? You might feel pulled in a different creative direction later in the month.

The eclipse will be affecting your fourth house, and you may experience a fundamental change in your philosophy or approach to life.

Get ready for the people around you to spill some serious tea. You will likely hear a lot of gossip and news around Jan. 31.

Time to zip up the wallet, Cancer! The eclipse will be activating your second house, causing your personal assets to dwindle. No time like the present to start (or re-start) that New Year's budget you put together.

You may find yourself in the spotlight this month. Stardust recommends that you take the time to focus on your own emotional needs — or to consider a new look!

Virgo, all of this astronomical chaos is too much for you. You may go into a state of hiding — metaphorically or physically, if we're being dramatic — to wait it out.

This is a time of friendship for you. You may find yourself meeting new friends or helping an existing friend out of crisis during the eclipse.

The eclipse is going to be in your tenth house, which means you can expect changes in your career and public image.

You're kicking off the new year with some new interests! Later this month, you might suddenly feel a pull to book a spontaneous trip or to explore a new cuisine.

Your eighth house — the one representing sex, death, and taxes — will be most affected by the eclipse. It's time to make good on those pesky debts!

Aquarius, you'll find yourself focusing on others and balancing relationships around Jan. 31.

Take this time to change up your workout, your commute route, or your morning routine. You'll likely be antsy for change in your day-to-day life!

More like this
Here’s Your Daily Horoscope For September 29, 2022
By Mecca Woods
The Spiritual Meaning Of Angel Number 000, Explained
By Kristine Fellizar
These 4 Zodiac Signs Will Be Extra Lucky In October
By Brittany Beringer
Here's Everything You Need To Know About Shuffling Your Tarot Deck
By Brittany Beringer
Get Even More From Bustle — Sign Up For The Newsletter