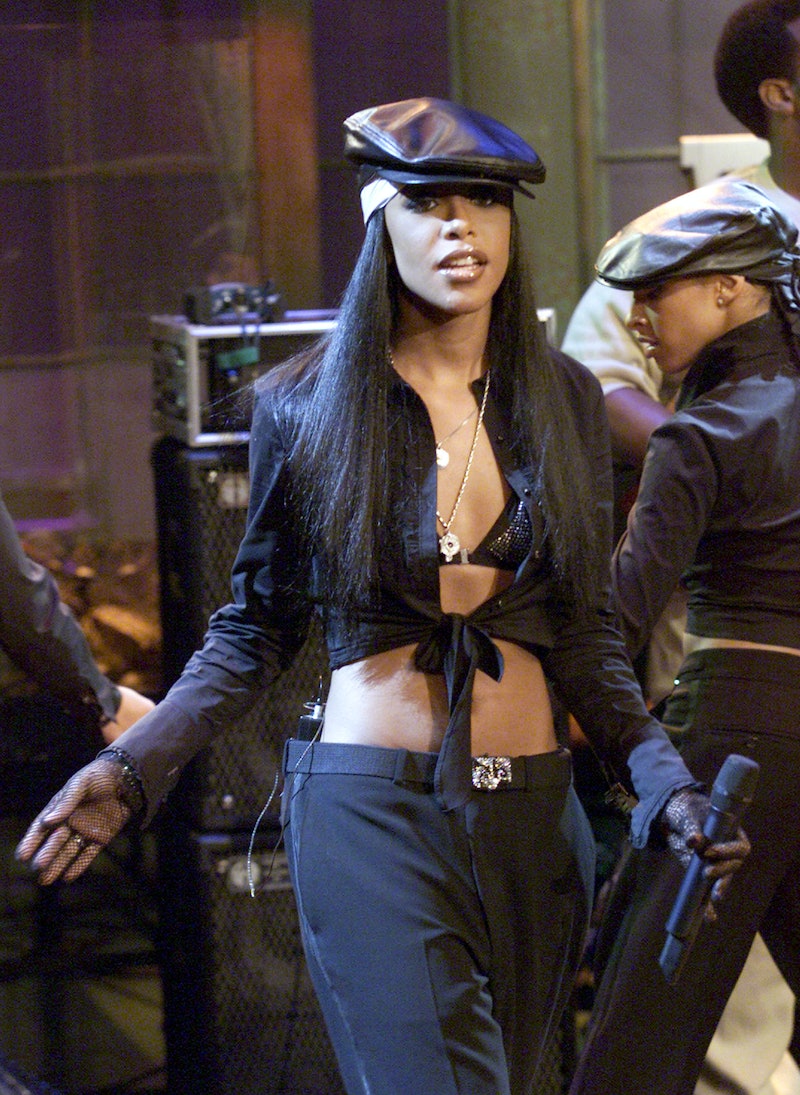 Spoilers ahead for Surviving R. Kelly. The '90s R&B singer R. Kelly has long faced allegations of sexual misconduct, but the new Lifetime docuseries, Surviving R. Kelly, explores his relationship with Aaliyah, detailing their reported marriage when she was just 15 years old. What's more, a backup singer named Jovante Cunningham recalls in the documentary that she and others saw Kelly and the then-teenage singer having sex on a tour bus. The late pop star's mother, Diane Haughton, released a statement about this claim on Twitter, calling her comments "lies and fabrications."

The incident that had prompted this strong response happened — as Cunningham tells it — while they were on a tour bus. She explains how there were bunk beds on the bus, where they slept with curtains pulled across for privacy. However, the curtains were open, since people were chatting. "When the door flew open on the bus," the backup singer says in the docuseries, "Robert was having sex with Aaliyah." She goes on to describe what she saw as "things that an adult should not be doing with a child."

In Haughton's response to the documentary (Aaliyah's father has died, according to GQ), she's denied the claim that her daughter and Kelly had sex on the bus or had an improper relationship. "My husband and I were always on tour with [Aaliyah] and at interviews and every place she went throughout her entire career," Haughton wrote. "Whoever this woman is, I have never seen her before anywhere on planet earth, until now." This was released through the Twitter account Aaliyah for MAC, and Bustle has confirmed that the statement was indeed from Haughton.

R. Kelly met Aaliyah when she was 12 years old, according to the documentary, and he ended up mentoring her. The singer's first album — which Kelly produced and wrote, per the L.A. Times — was titled Age Ain't Nothing But a Number. "In hindsight, all of the songs — they're real stories," Cunningham says in the series.

"[I]f you’re listening to 'I want to marry you, pussy,' and not realizing that he said that to Aaliyah, who was 14, and making an album he named Age Ain’t Nothing but a Number — I had Aaliyah’s mother cry on my shoulder and say her daughter’s life was ruined, Aaliyah’s life was never the same after that," music journalist Jim DeRogatis, who originally broke the story of R. Kelly's alleged sexual misconduct for the Chicago Sun-Times, told the Village Voice in 2013.

Surviving R. Kelly discusses the speculation around Kelly and Aaliyah's relationship, although they denied any romantic involvement, per the documentary. "People ask me if my parents mind me working with someone like him," Aaliyah told the L.A. Times back in 1994. "But they're thinking about the guy they see on stage or the guy who makes those sexy albums. But that's his stage image. It's just one side of him — not the side I see. He's really a sweet guy."

On Aug. 31, 1994, Kelly and Aaliyah reportedly got married when she was just 15 and he was 27, per WBEZ. Kelly's former tour manager and personal assistant, Demetrius Smith, admits on camera to forging the marriage certificate (her age is listed as 18 on the document). When asked about the marriage in the aforementioned 2016 interview with GQ, Kelly said:

According to the Washington Post, Aaliyah told her parents about the marriage, and they had it wiped from her record. Per the documentary, their marriage was annulled within two months, and Kelly sent Aaliyah just $100 not to pursue legal actions against him.

While details surrounding Aaliyah's relationship with Kelly might be up for debate given that her family has disavowed the documentary, over 50 other women give interviews in the documentary about suffering from sexual and emotional abuse from Kelly, or having witnessed it. His ex-wife, Andrea Kelly, goes into great detail about her life with the singer in the documentary, and previously reported that what she experienced in her marriage was "criminal," according to Billboard.

While Aaliyah's legacy is precious and her family has every right to share their feelings about it, there are so many other stories in the docuseries worth at least hearing out. Aaliyah can't speak for herself about her experience with Kelly in 2019, but other women are starting to speak about theirs. It's important to listen to their voices, as well as Haughtons.

As for how the rest of the documentary will be received, only time will tell. The first installment of Surviving R. Kelly premieres Thursday, Jan. 3 at 9 p.m. ET.