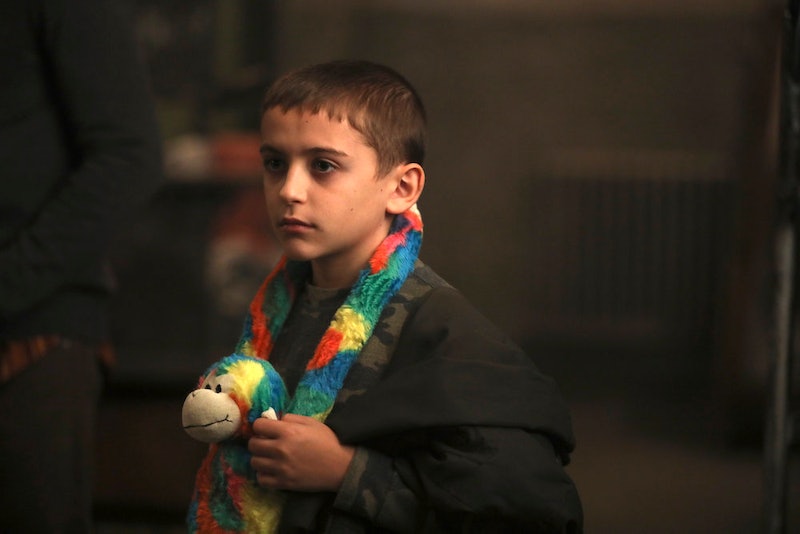 Spoilers ahead for Manifest Season 1, Episode 5. Each week Manifest gets even more convoluted as audiences try to piece together what the characters don't even know themselves. But it's becoming increasingly clear that "it's all connected" on Manifest, or so the callings have said — but what does that even mean? Every episode of the NBC show seems to have one calling that is highlighted more than the others. In Monday's episode, the repeated calling was "it's all connected."

The phrase seems to be the first calling any Flight 828 passenger received, and it came to Cal. While still on the plane, he saw something strange out of the window. All audiences see is a very bright light, and then Cal saying, "It's all connected." It's the original calling, and it could explain a lot.

It's been clear that the passengers from the mysterious flight are all bound by their unique experience of somehow time-hopping five years into the future without feeling as though any time has passed. It also seems like they're connected by the voices, visions, and feelings they're getting from some force outside themselves. These callings have allowed the passengers to know things they shouldn't, save people they couldn't have even known were in danger, and have connected them all.

As we saw in the Oct. 15 episode, the callings may be coming to each person in their own voice — but callings can be shared amongst passengers. When Kelly died, her calling came to Michaela. And when Bethany's cousin was in trouble, it was Saanvi and Michaela who got the calling to help him. They didn't even know Thomas, but whatever happened to them on the plane to give them these visions connected them enough to help them save each other. Both Ben and Michaela also got the same calling about saving the kidnapped girls in the pilot, and in the most recent episode Ben and Cal shared the "it's all connected" calling.

It's not as simple as all the subways being connected to lead them to Thomas' hiding spot, either. It may have been that easy, if not for Cal's calling on the plane. If that was truly the first calling, it's basically the mission statement for the force that's delivering the callings in the first place. Now, is it the kind of thing that if the passengers all realize they're inextricably linked the callings will go away, satisfied to have connected a plane of strangers and give them all a unique family?

Probably not. Ben started receiving the "it's all connected" calling when he refused to help Michaela with Thomas. He was turning his back on the flight, and the voice wasn't happy about that. For the rest of the episode, whenever Ben tried to make his own decisions, the "it's all connected" calling came. He tried to get around it by flipping a coin to make his decisions, but the callings refused to be ignored.

Eventually the calling went to Cal, who ran away from his dad through all the connected subway tunnels and led them back to Thomas. And when Ben tried to resist again — by not leaving when Cal said to — Ben heard "it's all connected" again. It feels like the calling is trying to get him to let go of his own ideas and trust in something greater — but what?

It seems the flight passengers are human vessels for the voice. So far, the voice has wanted only good things for the passengers and the people around them – rescues, protection, saving. But at times, it also comes at the cost of being able to live their own lives. They're no longer their own people, they're an all-connected mass of servants designed to follow vague directions at the whim of some voice. And having the calling come through Cal worked on Ben. He's back in it. He won't stray again.

The callings are getting more controlling with each episode — and the passengers may soon find that being all connected is not what's best for them.