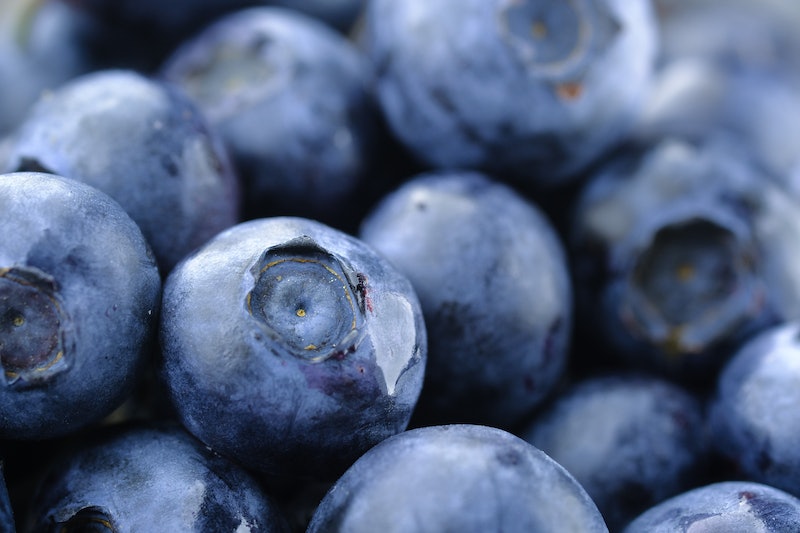 If you've been seeing fruit symbols on Snapchat lately and are wondering, “What do blueberries mean in Snapchat stories?” you're definitely not alone. Just like the oh-so-popular peach emoji, each different fruit — be it a cherry, banana, or pineapple — has a secret meaning that’s way more than meets the eye. Just like the blueberry is chock full of antioxidants, social media is overflowing with codes, secret languages, and difficult to decipher acronyms. Most of these shorthands were created and circulated by teens, and the resurfaced trend — it actually began in 2016 — of tasty fruits posted in Snapchat stories is no exception. So if you're wondering what the heck is going on with all these vitamin-rich emojis, you officially have permission to feel old.

Before popping up in stories in April 2020, the fruit trend initially began shortly after Christmas day in 2016 as a way to share one's relationship status over Snapchat, according to the social media blog Wojdylo. It seems amidst present opening and family time, a group of teenagers home on winter break had ample opportunity to create an entire code based around these healthful emojis. Originally started as a “girls only thing to confuse guys,” the fruit meanings were circulated in a private message that girls were encouraged to forward to their female friends on Snapchat.

The game quickly spread, no doubt helped along by the new group messaging feature Snapchat added in December 2016. The sneaky trick worked — the boys were stumped (as were most people over the age of 16).

An entire Reddit thread was started in an attempt to decipher the meanings of the fruit. Reddit user bubblegumwar posted, "All the girls on their story have put fruits such as "blueberry" and "pineapple" but none of us boys can work out what they mean... Anyone else noticing this?" With a little detective work, the boys eventually managed to crack the code, and posted the fruit meanings for all to see. It seems if you see a blueberry on your crush's Snapchat story, you're in luck. According to the updated Reddit thread, posting a blueberry means that you are single. Blueberry and cherry were the first fruits to be used frequently, cherry meaning "in a relationship." One of the original Snapchat messages about fruit was discovered, and confirmed these meanings:

Lemon: Want to be single

Raisin: I want to get married to my partner

While most fruits are fairly straightforward, there is some debate over the meaning of banana. According to the blog post, Banana means married, however, in an ironic twist, the Reddit thread pegged it as “can’t find the right person.” As this code was created by teenagers, I'm inclined to believe Reddit's meaning. However, if you really want to know a person's relationship status, you could always ask instead of relying on fruit symbology.

This article was originally published on Dec. 30, 2016