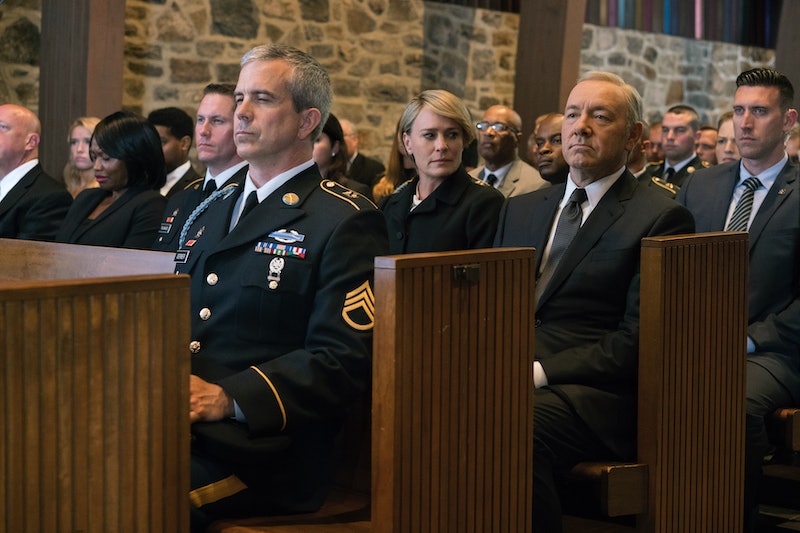 House Of Cards takes a brief turn for the weird in Episode 8 of its fifth season. (Spoilers ahead!) In an attempt to sway a crucial state in the presidential election, Frank Underwood takes a trip to a mysterious retreat with a secret society-type organization called Elysian Fields. The membership is made up of many of the most powerful men in the country. And Frank uses his charming conversational skills to sway others to his favor, though everyone is told that "Buzzing bees do not sting here." What does this cryptic phrase mean, and what does it tell us about Elysian Fields?

Despite how Elysian Fields seems to the average viewer, the organization appears to be based in fact. The fictional secret society seems to be modeled after the real Bohemian Grove, which The Washington Post claims is a very old tradition wherein some of the world's most powerful people gather in the California woods to fraternize. Just as House of Cards seems to have borrowed from Bohemian Grove to create Elysian Fields, the societies' mottos have a similar structure and interpretation. According to the same Washington Post article, those who enter Bohemian Grove are told that "Weaving Spiders Come Not Here" which means the same thing as "Buzzing Bees Do Not Sting Here." There's not supposed to be any business talk in Elysian Fields.

However, Frank isn't one for rules, whether they're put in place by the Supreme Court or by those that worship "the Crow." Despite the warning that buzzing bees do not sting at Elysian Fields, Frank manages to introduce himself to the right people and say the right words in order to get his way. By this point, he's managed to effectively hack the presidency for himself, but Frank may be getting in over his head by disrupting Elysian Fields.

While he hasn't changed much since the beginning of the series, Frank's perception of power has. Having spent decades of his life in Washington clawing his way up to the top of the political ladder, speaking with people at Elysian Fields seems to have expanded Frank's understanding of where the true power lies and who the men behind the man on the throne are. In the end, Frank has no interest in the popularity or visibility that comes with being president. He's only interested in the power, and it looks as though some of the less visible members of Elysian Fields may actually have more power than anyone in the White House.

Frank is constantly looking for the next step above where he is when it comes to power, and he may have found it in Elysian Fields. Now the trick will be how he takes his cutthroat political skills to the next level, which could end up being far more difficult. The president may be able to push a young reporter in front of a train to protect himself, but will he be able to manipulate and possibly terminate people as powerful as he is in the quest to become the most powerful? The warning is that "Buzzing Bees Do Not Sting Here," but Frank has made it clear that he's no bee. He's a wasp.