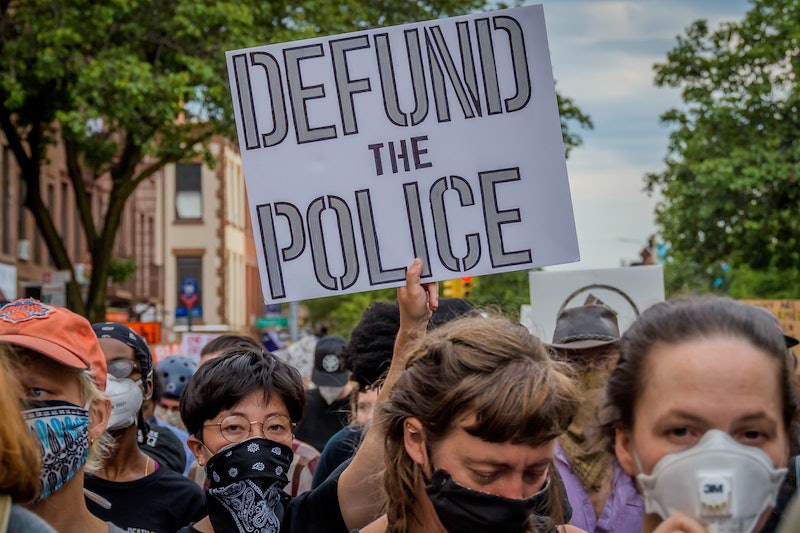 As protests against police brutality grow in size, many police departments are responding with more violence: They've targeted medical tents, journalists, and used weapons like tear gas and rubber bullets to combat even peaceful protesters. These responses have provoked a discussion about defunding the institution, or at least scaling back law enforcement budgets.

Not sure what that means? That’s completely OK. If you’re new to the world of social organizing but felt called to action by the recent police killings of Breonna Taylor, George Floyd, Tony McDade, and others, read on for a full explanation of what defunding would entail, why people support it, and potential drawbacks.

What Would It Mean To Defund The Police?

Defunding is an alternative to police reform that points to the failures of relying on policies alone to prevent acts of terrorism by officers. It proposes that a portion of the money spent on police should be reallocated to other social and economic services, like food assistance and mental health programs. Some U.S. cities have already taken steps toward this. On June 3, Los Angeles city leaders announced that they're looking to reallocate $100 million to $150 million from the LAPD budget to support the Black community.

For more information about what defunding could look like in practice, check out this article from criminal justice news source The Appeal.

Why Should The Police Be Defunded?

As The Guardian reports, though major police reforms have been adopted across the country, evidence shows they’ve done little to change the militaristic attitudes of law enforcement, especially in low-income communities of color. Take the case of Minneapolis. Beginning in 2015, the city implemented reforms like de-escalation training, stricter use-of-force standards, and police-community dialogues as part of a national procedural justice project that cost the federal government $4.75 million. Yet all that top-dollar instruction and equipment was not enough to prevent Minneapolis officers from killing George Floyd on May 25. Could that money have been better spent?

What’s more, taxpayers fund the nation’s policing system, with the percentage of spending funds varying by city and state. Unlike specially-designated millages for funding things like parks or zoos, citizens often have no say in what proportion of our cash is distributed to the police; there’s no box to check on your voting ballot for that.

Well-known advocates for defunding include New York State Senator Julia Salazar, ACLU Executive Director Anthony Romero, and Representative Alexandria Ocasio-Cortez. Recently, celebrities like Lizzo, Jane Fonda, and John Legend have also expressed their support for redistributing police funds by signing an open demand letter. To advocate for defunding, find out who manages your city’s budget and call them. Not sure what to say? Check out this script from Instagram user @_erichu.

How Much Money Do They Have?

The short answer: a lot. According to the most recent data from the research hub Urban Institute, state and local governments spent a combined $115 billion on police in 2017, plus another $79 billion on the construction, operation, and maintenance of correctional facilities and parole programs. That adds up to a whopping $194 billion, making police and corrections the sixth greatest source of general spending at the state and local levels that year. Together, that’s more than the amount spent on highways and roads. In addition to state funding, documents from the United States Department of Justice indicate that in 2017, the federal government spent $14.4 billion on law enforcement.

By comparison, the federal government sets aside about $13.8 billion annually to provide children with low-cost or free school lunches, according to the United States Department of Agriculture. Michigan has spent about $339.5 million in state money on the Flint water crisis since January 2016. Meanwhile, the state has allocated more than double that amount to its police budget for 2020 alone. On May 26, Los Angeles Mayor Eric Garcetti and the LA City Council approved $41 million in new bonuses for police officers, while nearly 59,000 people experience homelessness in LA County on any given night.

How Is The Money Used?

The ways departments spend their money varies, but the largest chunk goes toward officers' paychecks, which includes full- and part-time pay, benefits, and overtime pay for all employees. Nationally, the average salary for police officers ranges from $36,290 in Mississippi to $105,220 in California.

As an example, in 2017 the metropolitan police department for Washington, D.C. spent $476 million of its $555 million budget on personnel services, leaving the remaining $79 million for expenses such as interdepartmental charges, contractual services, depreciation, material services, and other expenditures. In Cincinnati, Ohio, the trend continued, with $86.7 million of the city’s $132.7 million budget doled out to department employees in 2017.

What Are The Drawbacks Of Defunding?

Since the majority of police budgets are spent on officer salaries, defunding would cause thousands of officers and other staff to inevitably lose their jobs. However, if funds are redistributed as the movement intends, those jobs would be replaced with thousands of others in sectors like health care, education, and housing development.

Critics of defunding also point out that a diminished police presence could lead to private police forces broadening their jurisdictions. Usually enlisted by institutions like universities, these privately-owned security teams are given the same privileges as any government cop but are more protected from liability due to their exemption from the Freedom of Information Act and a lack of other legislation requiring them to release statistics.

In the long term, there’s also a possibility that defunding the police could detract from a focus on their abolition — the belief that the U.S. police and prison systems should be abandoned completely in favor of alternatives that prioritize protecting marginalized peoples.