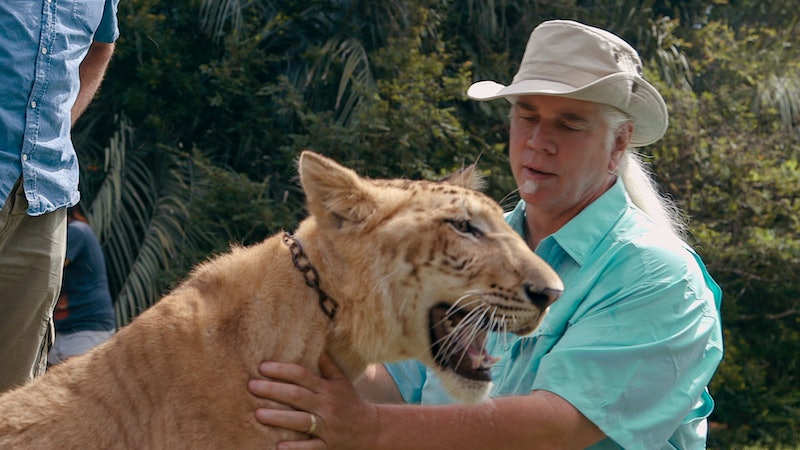 Everyone you know might be talking about Tiger King right now, but one of the people in the Netflix documentary would like to be excluded from this narrative. Doc Antle's response to Tiger King denies the documentary's claims about his T.I.G.E.R.S Animal Sanctuary in South Carolina. He doesn't approve of the "sensationalized" story portrayed in the seven-part series. Bhagavan "Doc" Antle is interviewed extensively in the documentary, which tells the story of Joe Maldonado-Passage — better known as Joe Exotic — and his years-long feud with Big Cat Rescue founder and animal rights activist Carole Baskin.

Despite speaking with the cameras about Maldonado-Passage, Baskin and the business of running a private zoo and tiger sanctuary, Antle is not happy with Tiger King. In response to the Netflix docuseries, he shared a message from the Myrtle Beach Safari staff on his Instagram page on March 25, explaining that he was "very disappointed that our facility was mentioned in the new Netflix series." The post posits that they were only included "because Doc Antle has been such a high profile wildlife personality for so many decades that his association would create more buzz," which seems to contradict the extensive interviews that Antle gave.

"It is important to understand that this series is not a documentary; it’s sensationalized entertainment with paid participants," Antle wrote in the post. "Tiger King is the bizarre story of Joe and Carole and their feud. These characters are not representative of experts in the wildlife sector or world class facilities like ours here in Myrtle Beach." Later, Antle also slamed the "less-than-flattering mistruths" presented in the series, regarding many of the accusations leveled against Antle and his team.

The post takes time to refute Maldonado-Passage's accusations that Antle "euthanizes" his tigers when they get too old to interact safely with visitors. "All cubs are cared for cradle to grave," the post reads, adding that "the wild accusation that we would ever euthanize a cub is manufactured sensationalism." In addition, the statement maintained that the Myrtle Beach Safari — which was raided by authorities in December 2019, according to the Tiger King credits — has "never had a USDA violation."

The post added that they "work collaboratively with various state and federal wildlife agencies" to give their animals the best care. (For the record, Antle has never been formally charged with any animal rights violations.) Antle concludes his post by inviting people to come visit the Myrtle Beach facility — which remains open despite concerns about the novel coronavirus — to see their facility and animals for themselves.

Though the post extensively defends himself and his staff against accusations of animal abuse, Antle's reaction to Tiger King doesn't mention his former employee and girlfriend, Barbara Fisher, who is interviewed in the show's second episode. During her appearance on the show, Fisher claims that Antle used "cult-like tendencies" to recruit women to work and live on the sanctuary, and that he controlled her appearance and even forced her to get a breast augmentation. Fisher quit in 2007, and now lives in Iowa with her husband and children.

Shortly after Antle shared his post, Fisher fired back at him on Twitter, writing that he was just "sad someone saw through [his] bullsh*t," and so he was pretending "it was because [he] was so very famous BEFORE the Netflix show." Still, Antle isn't the only person featured in Tiger King to have publicly spoken out against the documentary. On March 22, Carole Baskin called the series "salacious and sensational" in a post on her blog. In other words, everyone might be obsessed with Tiger King, but not everyone is a fan of the wild documentary.

More like this
Evan Peters Decompressed After 'Dahmer' By Watching This Will Ferrell Movie
By Grace Wehniainen
17 Photos Of The 'Wednesday' Cast Vs. The 1991 'Addams Family' Cast
By Grace Wehniainen
The ‘Emily In Paris’ Season 3 Trailer Teases Major Career & Love Crossroads For Emily
By Bustle Staff
The First Trailer For 'That '90s Show' Includes So Many Nods To The Original Series
By Jack Irvin, Alyssa Lapid and Grace Wehniainen
Get Even More From Bustle — Sign Up For The Newsletter