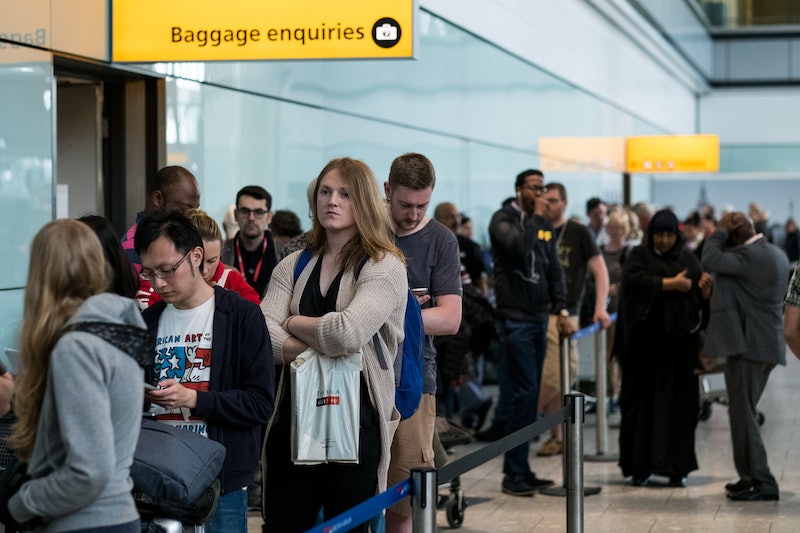 It's no secret that the impact of modern life is having a detrimental effect on our planet. An increase in air travel as our world becomes more and more global is one of the major contributors to humanity's carbon footprint; and now, it seems there's a Swedish word meant to discourage unnecessary air travel. It's called flygskam, which, in Swedish, means flight shaming. According to a study published in the journal Environmental Science and Technology, air travel is the most polluting form of transportation — so, because of this, the flygskam movement is gaining traction across Europe. And with its title as one of the most eco friendly countries in the world, Sweden is leading the flight-shaming charge. There's even a flygskam Instagram account with almost 17,000 followers.

France24 reported that a Swedish Instagram account dubbed "Aningslösa influencers" (meaning, literally, clueless influencers), "has been shaming social media profiles and influencers for promoting trips to far-flung destinations, racking up more than 60,000 followers." Instead of flying, the philosophy of flygskam promotes opting for train travel to avoid increasing carbon footprints — and it does so by shaming anyone who travels by plane.

"I'm certainly affected by my surroundings and (flight shame) has affected how I view flying," France24 quoted Viktoria Hellstrom, a 27-year-old political science student in Stockholm, as saying. However, flygskam didn't stop Hellstrom from meeting friends in Italy — her trip just took a little longer instead. "The only way I could justify going there was if I took the train."

People who flygskam others also reportedly engage in tagskryt, which means "train bragging" — literally, bragging about taking the train instead of flying. While flygskam and tagskryt are rampant in Europe, they really haven't caught on in the U.S. just yet — although, with the prevalence of Instagrams like "Aningslösa influencers," that could change by the time summer travel season is in full swing here in the U.S.

The negative impact of air travel on the environment certainly makes a case for investing time, money, and research for a greener travel solution. If you're traveling to Europe from the U.S., for instance, there's always the option of taking a ship like in old-timey days, and then committing to taking trains once you arrive.

However, if you have got some air travel coming up and you're feeling the flygskam, you can work to reduce your carbon footprint in other ways that will make a difference in the environment.

The website Carbon Offsets Alleviate Poverty has more than two dozen detailed ways to reduce your negative impact on the environment. From carpooling and making sure your tires are properly inflated to making your home energy efficient and being mindful of the foods you eat, there are a lot of things everyone can do to help make the future a little greener. Because, if we keep going on this current path, all of the things we count on to make life easier and more enjoyable are eventually going to do us in. How's that for irony?